The global rail market has grown from €169bn in 2016 to €183bn, and the rate of growth has picked up from a forecast of 2.3% two years ago to 2.8%. These are some of SCI Verkehr’s findings in its latest analysis of the market, as Maria Leenen, CEO, and Andreas Wolf, senior consultant with SCI Verkehr, explain. 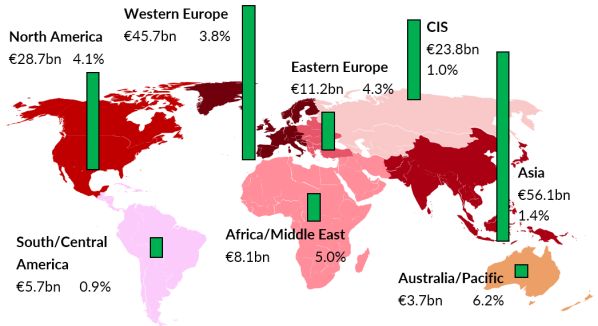 THE 2018 Worldwide Market for Railway Industries study, which will be published by SCI Verkehr in time for InnoTrans 2018, predicts stronger growth than two years ago when the rate was expected to decline from 3.2% to 2.3%. With a current market volume of €183bn compared with €169bn in 2016, an annual growth rate of 2.8% is forecast.

Particularly good prospects are expected for new business, as the annual growth rate has increased from 1.3% in 2016 to 2.4%. In addition to the high performance of rail-based transport systems, both environmental protection and decarbonisation have developed into significant growth drivers.

However, a number of uncertainties cloud the forecast. The current level of high political and economic uncertainty as well as growing protectionism could greatly challenge the market. These uncertainties particularly affect long-term infrastructure projects, as investment security becomes doubtful in some regions and countries.

Important technical market trends include technologies for alternative traction systems to reduce emissions as well as the digitalisation and automation of rail transport in order to achieve the long-term objective of autonomous mainline trains. It is therefore crucial to set the right course for the future in order to continue to withstand the growing competitive pressures from other modes of transport.

The Chinese rail market is losing momentum and will stagnate up to 2022. However, great potential lies in rail freight transport between Asia and Europe, although it is starting from a modest level. Established markets such as Europe and North America are now performing more strongly, with an annual growth rate of around 4% compared with 2016 cumulative annual growth rates of 3.2% in Europe and just 1.4% in North America. Renewal of existing networks, expansion of rail transport in metropolitan areas and digital modernisation is driving this positive development.

It is clear that in highly-developed regions such as Europe, the importance of diesel traction has greatly diminished and will disappear in the long term. In Germany, it is expected that no new diesel trains will be required after 2025. Based on the economic as well as technical advantages of the established system, SCI Verkehr expects an increase in electrification of heavily-used lines.

Even stronger growth in electrification will reduce the time spent on planning and implementing these projects, which, in combination with additional infrastructure works and noise reduction measures, can become quite costly and complex.

In future, less-heavily-used lines may adopt economically-friendly systems such as hybrid trains in the form of a traditional EMU with a battery or hydrogen- fuel system. Additionally, the importance of dual-power electric/diesel hybrid trains will continue to grow as it is a practical and low-emission interim solution for partially-electrified networks. Hybrid technology, which combines a diesel generator and battery, is progressively gaining importance for shunting locomotives. Many of these technologies are currently in the testing phase and will take a few years to achieve production maturity and field-proven solutions.

However, real alternatives to the traditional mainline diesel locomotive do not exist and will continue to remain in demand. In this segment, alternative fuels can improve the environmental balance.

Digitalisation and automation of the market are crucial to further developing the railway and are requirements for autonomous transport. Metros are already experiencing these benefits, and the total global length of fully-automated metro lines now exceeds 1000km. There are also examples within the freight market: in Australia the first automated and driverless train hauling iron-ore was operated with a total of three locomotives.

A different picture can be seen on many conventional lines, as it will take a very long time before the comprehensive train control, safety and signalling systems are installed which will facilitate autonomous trains. In addition, existing operating regulations represent a major obstacle.

However, speed is essential: road haulage operating costs are expected to fall through platooning and even semi-autonomous driving, which will place extra pressure on rail freight’s competitiveness. A stronger emphasis on innovation and customer-oriented solutions will help railways to continue to compete in this environment.

Although China remains the largest national market for railway equipment, with an annual market volume of over €33bn, it is now decreasing after decades of exceptional growth and is forecast to shrink by -0.4% up to 2022, while the rest of the world is expecting a 3.5% growth rate.

Declining public investment in the high-speed rail network, as well as the introduction of stricter investment criteria regarding metro systems, will create barriers to growth for passenger transport markets. This will have a strong impact on the Chinese OEM market, which according to SCI Verkehr’s projections, will decrease by 5.5% per annum between 2017 and 2022 while the rest of the world will grow by 4.7%. Increasing investment in small-scale light rail transit (LRT) systems and inter-city networks will not be able to make up for the reduction in spending on high-speed or metro projects. However, the aftersales market will continue to grow through fleet expansion and higher maintenance requirements.

Positive impetus will come from rail freight transport. China is experiencing a restructuring within the freight market, in that there is a decline in transport of freight for heavy industry and a shift to lighter goods in containers, which is promoted through the improvement of framework conditions for the railway. The goal is to reduce environmental pollution in cities and to increase the portion of rail freight from 12.7% in 2016 (compared with 32.7% for road and 52% for water) to 30%. This will positively affect the procurement of new flexible-use rail freight wagons, intermodal terminals and environmentally-friendly locomotives.

The consolidation of the global railway market is continuing. Two major new players will emerge through the planned mergers of Siemens Mobility with Alstom and GE Transportation with Wabtec, which will substantially increase the importance of the top five companies in the railway market. Subject to antitrust approvals, the mergers will likely be effective by early 2019.

CRRC remains the undisputed railway equipment market leader and sales increased by 6% from 2016 to 2017, due to the production of high-speed trains. The proportion of exports increased slightly and is now over 9%. However, decreasing domestic demand is increasing the pressure on CRRC to expand internationally and will lead to greater competitive pressure globally.

CRRC’s foreign activities are currently undergoing profound change. Market entries, for example in Africa and South America, have often occurred though Chinese loans, which in some cases were financed through mining rights and raw material supply. These activities have been exhausted in most countries. SCI Verkehr expects that the number of new construction projects will only increase slowly because of the growing political uncertainty and in some cases, these countries’ poor creditworthiness.

In order to grow further, CRRC will therefore be forced to enter competitive railway markets such as Europe and North America, in which strong domestic manufactures already exist. This is starting to happen in the United States, but it requires considerable investment and great endurance.

In comparison with the top 10 ranking of global equipment OEM and aftersales companies two years ago, one of the two most important freight wagon manufacturers - Greenbrier - has dropped out due to the declining market for new wagons, while Progress Rail, which owns US locomotive manufacturer EMD, has entered the chart, ahead of its main competitor, GE Transportation, which has dropped from fifth to 10th due to a fall in turnover. Wabtec has also grown significantly through the acquisition of Faiveley, moving up from eighth to seventh position. Wabtec should move up to fifth position once the merger with GE Transportation has been ratified, or even fourth place if the Siemens-Alstom merger goes through.

Other notable changes include Alstom moving into second place ahead of Bombardier, and Hitachi Rail moving up from ninth to fifth place following the takeover of AnsaldoBreda. However, train builders Stadler and CAF are currently not in the top 10.

Both of the large Chinese construction companies, CRCC and CRECG, make most of their profits through construction and planning services and only a small proportion through railway technology products and are therefore not listed in the top-10 ranking. Signalling specialist CRSC is an important player in the Chinese market, but not on the world stage.

The global railway market shows solid growth despite increasing uncertainty, while there are significant changes taking place within the country and product markets. For the first time, future market growth is not being driven by China, as the Chinese market is saturated after decades of continuous growth. Europe, the second most important rail market after Asia, will therefore be the target of all manufacturers, including Chinese suppliers. Despite innovations in traction, digitalisation and automation, manufacturers need to cut costs in order to survive intensified price competition. At the same time, the course must now be set for sufficient financing of long-term investment projects so that the market does not lose momentum in the long term. IRJ