Testing is underway by Siemens in Potsdam, Germany, with an automatic light rail vehicle as part of a three-stage project to develop fully-autonomous LRVs. As David Briginshaw reports, the first step has already been achieved with the introduction in Ulm of an LRV fitted with a driver assistance system. 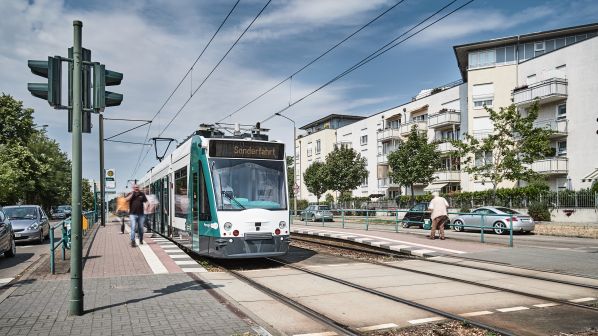 The new fleet of Avenio LRVs for the German city of Ulm is being equipped with Adas.

SIEMENS has been studying the efforts in the automotive industry to develop autonomous cars, buses and lorries, and has recognised that some of this technology can be harnessed to enable the autonomous operation of light rail vehicles.

While autonomous cars are unlikely to become a solution for urban public transport as they lack the capacity to accommodate high passenger volumes, autonomous buses could pose a threat to light rail if they become substantially cheaper and more flexible to operate, particularly if platooning of buses becomes feasible.

“Drivers represent quite a substantial portion of the operating costs for a tramway, so we see a need for driverless LRVs to maintain rail’s competivity with autonomous buses,” Mr Christoph Klaes, senior vice-president for light rail with Siemens Mobility, told IRJ.

“We envisage three stages for the development of autonomous LRVs. In the short-term, we have already developed our advanced driver assistance system (Adas), which is a collision warning and protection system. In the mid-term, which is where we are now, we are developing automatic LRVs for operation on certain types of line, such as segregated rights-of-way, while in the long-term we want to develop fully-autonomous LRVs.”

Siemens started to develop the base technology for Adas three years ago with laboratory tests, and the initial application of Adas is in Ulm in southern Germany, where an Ulm Combino was equipped with Adas for in-service testing and optimisation. The 12 new Siemens Avenio LRVs for Stadtwerke Ulm, the first of which entered service in July, are currently being retrofitted with Adas. “The vehicles were delivered with all the necessary cabling and fittings, but without the three core components - camera, radar and control unit - as it was agreed with the operator to wait until system maturity had been achieved,” Klaes explains. All 12 LRVs will be operating in Ulm by the end of the year. It is also planned to fit 10 older Siemens Combino vehicles with Adas.

During the prototyping phase for the Ulm Adas system, Siemens fitted the Combino LRV with a preliminary version of the tram collision warning system based on components supplied by Bosch. In addition, an industrial Lidar laser scanner, camera and radar sensors, a camera for event recording and a control unit were used for an independent assessment of critical situations and to define correct system reactions. This enabled Siemens to continuously evaluate the performance of Adas and to optimise the behaviour of the system.

Adas continually supports the driver to recognise critical situations early and prevent collisions. It issues a warning when a collision risk is identified and, provided Adas has been integrated into the LRV’s brake control system, it will automatically initiate braking if the driver fails to react quickly enough, unless he has overridden the system.

Adas requires a 12V connection to the LRV via a dc/dc converter. It can monitor up to 70m ahead of the vehicle up to a maximum speed of 80km/h.
Siemens offers three versions of Adas:

Siemens says that drivers of Adas-equipped LRVs have exhibited behavioural changes as they are aware that they are under supervision and therefore consciously try to minimise interference from Adas. They also develop a greater awareness of potential collisions. Adas is now being fitted to Avenio LRVs which Siemens is supplying to The Hague, Bremen and Copenhagen.

Siemens has now started the next phase of development: to realise an autonomous-driving LRV. “In Potsdam there will be no tram assistant,” Klaes explains. “Here we will use a system completely developed by Siemens for autonomous driving trials.” The system has been fitted to a Combino LRV and Siemens has reached an agreement with Potsdam Transport Authority (ViP), which has been operating Combinos since the late 1990s, to start conducting autonomous driving tests.

There were several reasons why Potsdam was selected for the trials. “ViP is a long-term customer of Siemens and was interested in taking part in the development of an autonomous-driving LRV,” Klaes told IRJ. “Potsdam is also very close to Berlin, where our team is based, which makes it very convenient.”

The trials in Potsdam are designed to test the next phase in the development of Adas, as Klaes explains: “We are using the video, radar and Lidar sensors to monitor the LRV’s surroundings, and an onboard computer to compute the data and give handling instructions to the vehicle’s control system. The system will decide whether the LRV will continue to drive or not, determine its speed and whether there is any risk of a collision. It can detect visual signs, traffic lights and other signs at the side of the track.

“The system takes over all the major driving tasks from the driver, like driving from one stop to the next, and considering signals, and other road users such as cars, buses, trucks, bicycles and pedestrians.

“We have installed a second seat for use by a ViP driver who can perform an emergency stop if necessary. This was one of the conditions to obtain approval for the trials.”

Siemens also has a team of specialists onboard and has fitted the vehicle with IT equipment to monitor the tests and modify the braking curve to simulate different driving styles.

“What is missing at present is opening and closing the doors automatically, but this is forbidden because we don’t have permission to carry passengers yet,” Klaes says.

Trials started four months ago on a 6km section of line in Potsdam. This section was chosen because it is connected to the depot, and mostly segregated from other road traffic, but has a lot of crossings, some of which are controlled by traffic lights. “It is a typical section of the Potsdam network,” Klaes points out.

“Testing has gone well,” he says. “At the end of the year we will decide if we will continue the trials in Potsdam.”

Siemens’ initial idea is to develop the system so that LRVs can be operated automatically in a depot, but going beyond this at the moment is problematic, as Klaes explains: “The whole legal background to achieve approval for autonomous operation in a city is so unclear that it is difficult to say what the next step will be. In any case, we will need to achieve a certain level of safety and security before we can think about the next step.

“The certification requirements and hence the necessary safety standards are a crucial element - besides the technological challenges - for the successful development of autonomous driving vehicles. This not only applies to rail but also to the automotive sector.

“It appears that the regulatory bodies for rail are waiting for the technology to develop, to provide input to define their safety standards. However, the industry cannot just wait for detailed specifications from the authorities, or the industry and the authorities will be deadlocked.

Nevertheless, Klaes says the German Association of Transport Companies (VDV) has initiated a working group for assisted and autonomous driving of trams, consisting of operators, certification bodies and the rail industry, including Siemens. “There we have identified the urgent need to address regulatory and safety issues early on and to drive the discussion from the industry side,” Klaes says. “First contacts have already been made with the Ministry of Transport and Digital Infrastructure in Germany, but the process is still at the very beginning.

“Therefore, one of the main objectives of our trials in Potsdam is to gain valuable experiences about the challenges an autonomous tram will face and what a safe solution should look like. Using this information will ease the common definition of safety standards and regulations.

“In addition, we will also build on the far more advanced discussions currently led by the automotive industry, which faces identical complex urban traffic situations as we do with a tram in mixed on-street traffic.

“The expected fundamental changes in regulations arising out of that process must of course also be considered in the German BOStrab regulations for the construction and operation of light rail systems. This was already the consensus in the VDV working group, although the BOStrab regulations already allow unattended operation on fully-segregated track under certain special preconditions. Indeed, the automated U-Bahn in Nuremberg operates under this exemption.

“We believe that the technical development and definition of the rules and regulations must go hand-in-hand, otherwise we will not be able to develop a technology suitable for certification. Establishing a cooperative process with the involvement of all stakeholders will hence be decisive for the success of autonomous LRVs,” Klaes concludes.