SILICON Sensing, Britain, has increased production of its miniature solid-state Pinpoint gyro by 30% to meet growing demand for precision levels of motion sensing. 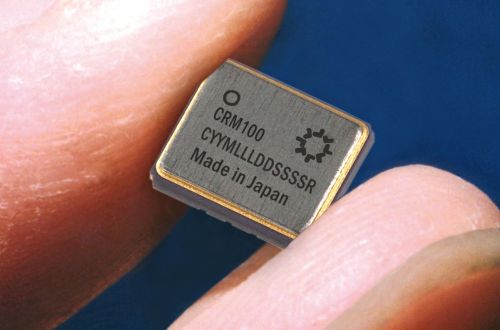 Silicon Sensing's pinpoint chip is the size of a small fingernail.

The Plymouth, Britain, based company says the pinpoint chip is a single chip device the size of the smallest fingernail, approximately 5mm by 6mm, packaged in a hermetically sealed, ceramic leadless chip carrier (LCC). A bank of 16 pinpoints can be combined on a printed circuit board (PCB) less than 30mm by 25mm to deliver four times better performance than a single device. As Pinpoint is available in both flat and vertical form factors, three-axis sensing solutions can be created on a single PCB.

“In tasks such as camera stabilisation for land surveying, operators now expect to work with minimal jitter, drift and noise, allowing them to increase the quality of what is often vital imagery and data,” says Silicon Sensing general manager, Mr Steve Capers.

Three Pinpoint gyros, as well as three of Silicon Sensing’s CRH02 gyros and in-house accelerometers, are also used in the company’s inertial measurement unit, DMU30. This is an all-Mems (Micro electro-mechanical system) unit delivering inertial performance that is equivalent to fibre-optic gyro (FOG) grade devices but with greater reliability and at a lower cost, size and weight than is typical of FOG technology.