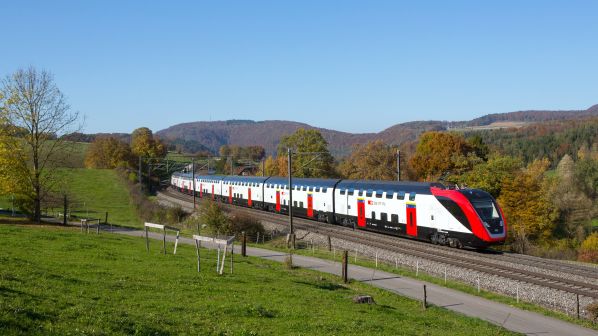 Smartrail 4.0 is expected to result in a 70% reduction in lineside signals and associated equipment.

SWITZERLAND has the dubious privilege of having one of the most densely-used rail networks in the world, for both passenger and freight traffic. Around 4 million people commute to work every day, more than ever before, and 31% travel by train. As a result, it has been evident for some time that a way has to be found to get the most out of the system without spending vast amounts constructing new infrastructure in this small, mountainous country.

Enter Smartrail 4.0, a traffic management system based on ETCS for the entire rail network. This is expected to boost passenger and freight capacity by 15-30% using existing infrastructure, cut annual costs for Swiss Federal Railways (SBB) alone by SFr 450m ($US 450m), increase the availability of safety installations by 50%, increase safety, particularly during shunting and at work sites, and provide a high-capacity radio system for customers.

Smartrail 4.0 was launched in 2017 as a joint industry programme involving SBB, BLS, Southeast Railway (SOB), Rhaetian Railway (RhB) and the Swiss Public Transport Union (VöV). The SFr 3bn project is financed partly under the LSVA performance agreement with the federal government and partly by the railway companies themselves.

The key to the whole project is digitalisation. Up to 100 people have been working on Smartrail 4.0 so far; their task is to develop the concept and a complete plan which should be ready by the end of this year.

“The idea is to solve problems as fast as possible - anything involving signalling, train sequencing, connectivity, shunting and the train itself - through automation and standardisation of the current manual processes,” says Mr Marc Reber, Smartrail 4.0’s project leader. “This represents a big leap forward in the digital railway world.”

The first step in the programme has already been successfully completed. “The breakthrough was reached on December 3 2018, when we completed a feasibility study followed by a simulation,” Reber says. The project phase is due to be completed by the end of this year. Development work is underway in cooperation with partners from various sectors in industry, universities and railway companies, as well as from other countries.
Individual functions will be tested step-by-step from 2020 onwards. A fully-functioning Smartrail 4.0 Release 3 will start to be tested in 2025 on one or more track sections.

The first roll-out of Smartrail 4.0 is planned between 2027 and 2030 on isolated low-traffic lines to minimise the number of trains that need to be adapted.

The next major update of the Command and Control Signalling Technical Specification for Interoperability (CCS TSI) is expected in 2022, which will include important features for SR40, such as using the Future Railway Mobile Communication System (FRMCS) for ETCS and voice communication, automatic train operation, virtual electronic signpost, and train integrity for ETCS Level 3.

Full rollout based on the CCS TSI 2022 is expected to begin in 2030 on 10 large networks followed by the Zurich and Berne S-Bahn networks and TEN-T corridors from 2035 to 2040. “We will introduce it gradually, not with a big bang, but by interacting with our users and customers,” Reber explains.

The Smartrail 4.0 project is divided into five sub-programmes including a traffic management programme that consists of a uniform system for optimal train operation, optimising timetables automatically and regulating train operations and customer information. This will replace today’s system which is regulated by various programmes which are not entirely compatible.

Smartrail 4.0 also envisages using ETCS Level 3 to enable direct communication between the train and the control centre, which Reber describes as an essential feature of the project. “We’re in close contact with the ETCS people and we are currently working on specifications,” he says. Localisation, connectivity, and security (LCS) will enable trains to be located continuously and with greater precision than now, which means that more trains can be run safely on any given line at the same time.

Smartrail 4.0 is expected to result in a 70% reduction in lineside signals and associated equipment. This will be achieved through Coat, a CCS onboard application platform for trackside-related functions, which shifts functionalities from the infrastructure to the vehicle. With a fundamentally different approach, the aim is to deliver a standardised architecture with a separation of hardware and software procurement.

Automatic Train Operation (ATO) will provide the driver with more assistance in the cab. “Although we are carrying out tests with driverless trains, it is not really a theme for us; we want to have a driver in the cab to keep an eye on things,” Reber says.

The last element of the project covers processes and requirements, as the first five parts of the programme require many processes to be modified, and is designed to ensure they match together better and therefore reduce complexity. “With information systems, some are not compatible, but we are working on it,” Reber says. “It is a matter of development, evolution, and testing in mutual cooperation to the benefit of all.”