SNCF reform back on track after devastating strike

Following a crippling strike, French National Railways (SNCF) is finally starting to implement the government’s hard-won reform programme. Guillaume Pepy, chairman of SNCF and CEO of SNCF Mobility, and Patrick Jeantet, deputy chairman and CEO of SNCF Network, outlined their plans to transform SNCF during a press breakfast at InnoTrans in Berlin attended by David Briginshaw. 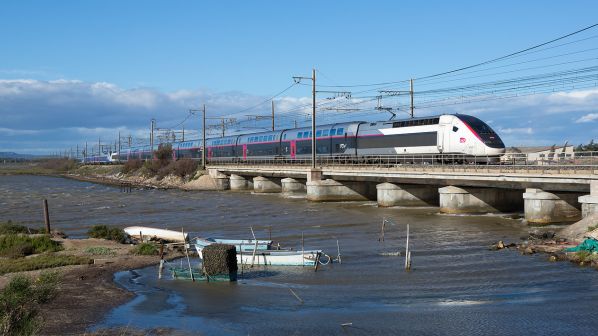 THE strike by employees of French National Railways (SNCF) in protest at the government’s decision to reform the national railway and controversially change the status of new employees to end their “the job for life” rights had a devastating financial impact on SNCF.

The strike, which started on March 22 and lasted until June 28, resulted in widespread train cancellations across the network on 37 days, costing SNCF €21m each day and resulting in a negative Ebitda of €790m.

SNCF says it had a good first quarter up to March 31 with TGV high-speed traffic up 9.6%, but by the end of June total revenue was down 3.3% at €16.1bn and TGV traffic dropped by 3.8%. SNCF estimates that without the strike, revenue would have grown by around 4%. It says it managed to offset the effect of the strike somewhat through first-half productivity gains of more than €330m and by selling non-strategic assets worth €120m.

“The French railway reform is radical and ambitious, and 80% of members of parliament voted in favour of it,” explains Mr Guillaume Pepy, chairman of SNCF and CEO of operating subsidiary SNCF Mobility. “SNCF staff are strongly republican, and some of them have been fighting hard against the bill, but it is done, and it is now a fact. This doesn’t mean there is no room for discussion and conflict, but the principles of reform have been validated and we are now working hard to roll out the programme.”

With the strikes over, Pepy says SNCF has three priorities:

“The first part of the year was spent handling the strike, but now we need to be customer-centric,” Pepy explains. He says under the reform plan,

SNCF has to transform itself into a normal company. “Our ambition is specific: to become a mobility company promoting rail on a sustainable basis. We have to go fast to reach the target of January 2020.”

There is a lot to do within the next 14 months and most of the reforms affect infrastructure manager SNCF Network, which will become a corporation in its own right. The Gares & Connexions subsidiary will switch from Mobility to Network, a more logical home for the stations’ developer.

“The key point is that €35bn of railway debt will be transferred to the state in two steps - €20bn in 2020 and €15bn in 2022,” says Mr Patrick Jeantet, deputy chairman of SNCF and CEO of SNCF Network. “This will save us €100m a year in financial costs. The debt was accumulated over time, particularly from the construction of high-speed lines, but you could regard it as an investment in fighting greenhouse gases.” As Jeantet points out, air is 50 times more polluting than rail.

An extra €200m will be available for investment each year starting in 2022 which will increase annual spending to €3.2bn. Between 2000 and 2010, only around €1bn was being spent on the national network. “For the last three-four years, we have been investing €2.7bn per year,” Jeantet says. “But in order to balance our books, we need to achieve a 2% increase in productivity each year, and to become cash neutral by 2024.”

Under the reform, SNCF Network will not fund any more high-speed line projects. In future, funding will instead come from the regions, which in some cases will form partnerships with the state, and in any event Jeantet says the government want to prioritise investment in the major cities to improve services for commuters.

SNCF Network’s capital spending during the last few years has focussed on the conventional network’s track which had been allowed to deteriorate while SNCF concentrated its energies on building high-speed lines. Jeantet says SNCF has finally halted the deterioration in track quality. “It is now starting to improve, but we need sustained investment in the track to catch up,” he says. “However, the signalling is still worsening, so this together with the catenary is our next objective for investment.”

Jeantet also wants to see the private sector playing a greater role in maintaining the network. He says private companies conduct 70% of renewals compared with only 25% of infrastructure maintenance, but there is a caveat. “We don’t want to farm everything out to the private sector because we want to maintain our detailed knowledge,” Jeantet cautions.

SNCF must also prepare for the opening of the regional passenger market to competitive tendering at the end of next year and competition on the high-speed market a year later.

“‘Fit for competition’ is our new motto,” Pepy says. “We need to win tenders and win new customers.”

Jeantet says SNCF Network needs to be transformed into a client-facing organisation. It has set up a special department to help the regions prepare for market opening and concessioning of services. “Three or four regions are quite well prepared, and Provence-Alpes-Côte d’Azur plans to launch tenders in 2019,” he reveals.

Pepy says Transdev and Paris Transport Authority (RATP) are keen to operate regional trains in France while German Rail’s (DB) Arriva subsidiary might be interested in bidding for tenders.

As far as assessing the potential market for high-speed operators is concerned, Pepy says it is always difficult for the incumbent to size-up the competition. “You are never really ready for competition because your rivals study the market and find a way to create a new business,” he says. Pepy believes operators, such as Renfe, Trenitalia and DB, may be waiting in the wings. “The question for them is the same as for us, what is more important: the domestic market or international expansion? I don’t have a clear idea of their ambitions. In the past, DB said it wanted to expand, but I am not sure this is the case now. Italian State Railways (FS) was keen to expand, but with the recent change of management, they may decide to focus on the domestic market.”

In the meantime, the priority is to reduce costs and develop services. “We need to cut our costs by €4.8bn,” Pepy explains. “There is still great potential for our high-speed services. We serve 120 million customers a year and have a market share of around 48-49%, including Eurostar and Thalys.

“To realise this potential, we need to attract more passengers, but the market is not homogenous. There are a lot of people using buses or car-sharing who would like to travel by train but find it too expensive.”

The plan is therefore to expand SNCF’s low-fare Ouigo services launched in 2013 which initially served out-of-town stations such as Roissy Charles de Gaulle Aiport and Marne la Vallée to the east of Paris to help reduce operating costs to half that of conventional TGV services. To broaden their appeal, Ouigo trains are now starting to serve central Paris stations.

Pepy says the target is to increase the proportion of high-speed traffic using Ouigo from 13% and 13 million passengers by the end of this year to 25% and 26 million passengers by 2020. This will be achieved by increasing the number of destinations served from 28 to 30 and the number of daily services from 48 to 70, which will require an expansion of the Ouigo fleet from 24 to 34 trains.

“Not all of our passengers are interested in low-cost,” Pepy says.

“We also want a high-end offer with the best service imaginable. We created InOui one year ago in southwest France, and we will extend this to eastern and southeastern France.”

Finally, Pepy says he believes the planned Siemens-Alstom merger will be good for SNCF. “If we start from the helicopter view, the European rail industry is facing competition from China and Japan. If we are not strong, we will have problems exporting. We need to strengthen manufacturing in Europe - this is a long-term view.”

In any event, the merger is awaiting a ruling later this month by the European Commission as to whether it will adversely affect competition in the signalling and rolling stock markets. The fear is that the merger will remove a strong competitor from the market leading to higher prices, less choice and less innovation.

In the meantime, SNCF is reorganising the railway, becoming more commercially aware, and preparing for competition. Alongside efforts to embrace digitalisation, Pepy believes this will transfor SNCF into “a data-driven company.” However, the railway still has a lot of work ahead to achieve this goal.

FOR years, SNCF has eschewed ETCS, arguing that its own TVM 430 cab signalling system was perfectly adequate for its high-speed network. But, with ETCS Level 2 in operation on the new Tours - Bordeaux high-speed line and installed on TGV Est linking Paris with Strasbourg, SNCF believes the technology can help to increase capacity on the 460km Paris - Lyon Sud-Est high-speed line, parts of which are operating at maximum capacity at peak times.

In 2017, the line carried 44 million passengers. With ETCS Level 2, SNCF estimates it could increase hourly capacity from 13 to 16 trains.
SNCF has therefore decided to invest €600m, to which the European Union will contribute €116.9m, to upgrade the line. This will comprise:

In addition, SNCF has decided to install ETCS Level 2 cab signalling on the Marseille - Nice - Ventimiglia main line. “This will cost €500-600m over three to four years without lineside signalling,” Jeantet says. “To replace the signalling on a like-for-like basis would take us 15 years.

“On less-busy lines, especially those with single track, we will have other systems designed to reduce costs,” Jeantet says. This will be one of around 50 measures aimed at cutting costs on these lines, such as replacing ballast with asphalt pavement to lower maintenance costs, renovating one track instead of two, and introducing shuttle services to simplify signalling.

By contrast, on busy commuter lines, SNCF is introducing communications-based train control (CBTC) under its Nexteo programme. This will allow 22 trains/hour to operate on the new extension to RER Line E in Paris when it opens in 2022 to Nanterre and two years later to Mantes-le-Jolie. This compares with 16 trains/hour on Line E today. Nexteo envisages semi-automatic operation at Grade of Automation 2 (GoA2) with automated starting and stopping and driver-controlled doors.

Finally, SNCF is planning an innovation partnership to develop a digital control centre for roll-out across the network starting in 2023. This is expected to be 15% cheaper than current computerised systems.