A new start for Dubai’s metro and light rail network

Social media platforms like Twitter and Facebook are changing the way passengers interact with rail operators. Kevin Smith examines how railways are responding to this media revolution. 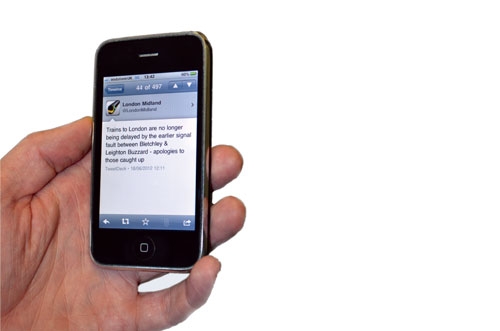 BELIEVE it or not, we are currently living through a communications revolution. The explosion of social media in the past five years through the growing influence and presence of platforms like Twitter and Facebook in our daily lives has changed the way we interact with one another and how we respond to certain events.

Where an overheated or crowded train might have once led to the muttering of displeasure, or a brief conversation with a fellow passenger about the shared discomfort, more and more people now take to social media to vent their frustrations.

The rapid increase of smartphone use in the past two or three years has turned social media into a truly mobile experience, meaning that more people are interacting while they are on the move. And while this is a dream for reporters who can quickly gauge public opinion from searching certain Twitter trends from their desks, as was seen during widespread rail disruption during Queen Elizabeth's Diamond Jubilee celebrations in London last month, it leaves rail operators vulnerable if they are not in a position to respond.

Many rail operators from around the world have subsequently launched their own Twitter and Facebook pages and are now constantly interacting with their customers online in real time, transforming the role of customer relations staff.

IRJ, a regular Tweeter since January 2010, follows many of the railways' feeds, and browsing our news feed reveals the various uses of the platform: from highlighting promotional fares on KiwiRail trains, to service updates and travel advice on Dubai Metro, and invitations for followers to suggest the best things to do in Lancaster by British franchisee First TransPennine Express (FTPE).

"The reputation of brands, big or small, can be broken through social media," says Ms Helen Peacock, digital customer engagement manager at FTPE. "We no longer control the conversation, consumers do. We therefore need to be in the social media space listening, responding and contributing to this."

Peacock says that with a customer base primarily focused on discretionary leisure travel, its social media strategy emphasises attracting new customers, promoting reduced fares and providing reasons and inspiration to travel. As a result she says that this strategy is helping to increase revenue, decrease customer complaints, enhance customer support and improve relationships.

"On Twitter specifically people contact us in both positive and negative manners," Peacock says. "But because we are prompt, open and honest and have a non-corporate conversation we have many examples of addressing concerns, changing the perception of us, and developing a positive experience, resulting in increasing positive sentiment towards our brand."

Mr David Whitley, head of marketing at British operator London Midland (LM), says that the company's use of social media began by utilising LM employees' personal Twitter accounts, including his own, to respond to individual requests.

However, he admits that he was soon overwhelmed, leading the operator to launch a dedicated feed that is now staffed every day between 07.00 and 19.00. He also says that the speed at which the sector was moving when the accounts were launched in April 2010 meant that no pre-defined implementation strategy could be put in place due to the risk that it would soon be out of date.

"Initially we used our Twitter account as a way to promote marketing-led functions to provide special offers and promote ourselves," Whitley says. "However, it very quickly became clear that in order to interact with people on a one-to-one basis and provide the services they require we needed more than this. We subsequently launched two accounts - one dedicated to providing service updates and another for promotion.

"We are very proud of our reputation and need to get people onside and we see social media as a way of building an online community. Railways are often seen as a faceless organisation where you cannot interact with an individual person very easily. Twitter in particular is a way of increasing engagement with our passengers and it has led to an increase in our transparency. It also enabled us to develop a reputation for being open and honest which has improved our relationship with our passengers."

In addition to its Twitter and Facebook pages, LM is present on location tracker FourSquare, which it uses as a marketing tool, and increasingly on YouTube. The operator also plans to use its Twitter feed on its website homepage and iPhone app as its service status feed, utilising the platform's reputation for providing concise and up-to-the-minute information, and increasing the reach of Twitter beyond its current 10,000 followers to the 50,000 people that have so far downloaded the app.

Inevitably the use of social media is altering the role of customer relations staff. By responding immediately to certain issues through social media platforms operators are improving the distribution of information, reducing the number of calls received and the flow of thousands of people to customer information points at stations during peak hours to ask the same question.

Whitley says that rather than allocating funds to pay dedicated Tweeters and Facebook monitors, the job of existing customer relations employees has evolved. Instead of answering the phone, these staff members are writing a 140 character tweet which can ultimately reach more people and improve the efficiency of the service.

"We hold a monthly "meet the manager" session where customers can ask questions and state their opinion about certain issues," Whitley says. "We still do this and customers can still write us a letter or e-mail if they wish. But the benefit of social media is that it allows us to respond immediately to problems like an overheated train that previously we might not have been aware of right away."

In contrast French National Railways (SNCF) has taken on full-time staff dedicated to social media. Mr Patrick Ropert, communications director and member of the SNCF Group Board, says that the railway's online forum at www.questions.sncf.com and Twitter are used for feedback from passengers. The railway also uses Facebook for marketing purposes, and has a Twitter feed dedicated to communicating with journalists.

"The division 2.0 Communication was founded in mid-2010 and today we have about 15 online managers each with their own speciality and subject," Ropert says. "Our budget for this has increased steadily over the past two to three years, reflecting the increased importance of these new communications channels."

Inevitably there are some potential pitfalls to using social media. Its remote nature means that people often say things that they normally would not when face-to-face. Mr John Austin, of British consultancy firm Austin Analytics, says that Facebook in particular has the potential to be overrun with abuse and therefore any such service requires constant monitoring.

"The accuracy and regularity of information is so important to retaining an operator's reputation," Austin says. "Social media has the potential to expose weaknesses in this and potentially embarrass the operator. They should therefore resource it properly by providing dedicated staff who monitor the site regularly and are able to remove any unsavoury content as quickly as possible."

Whitley says that while LM did suffer a fair amount of abuse and crass language when initially rolling out its programme this has reduced significantly.

He says that the company's policy to respond to every person who communicates with it through social media in a timely manner without using aggressive or abusive language has rubbed off on these passengers. Some that were particular angry and scathing of the service on offer when they first began to interact through social media are now full of praise for the operator, with the personable nature of the service allowing operators to track and build relationships with individual passengers.

Ropert reports a similar development. "This new interactive channel was a way for the public to express their frustration at the impression that they were never being heard or listened to," he says. "Over time, even if such critics inevitably remain, they are partially offset by this new dialogue. SNCF was the first major company in France to answer its customers transparently. This translated into an increasing number of positive comments which have played their part in changing perceptions of SNCF."

Inevitably technologies will change and the social media platforms used today may be replaced. Austin says that the time may come when the business community begins to charge for access to the services because advertising budgets are under pressure and the revenues that Twitter and Facebook bring in are not as large as they first thought.

However, for operators which depend on the platform this will be difficult to do. Passengers now expect access to these services because. And while certain platforms may indeed fall by the wayside, others are always likely to fill the void by offering an enhanced service and continuing the social media revolution.