As part of its Vision 2030 scheme, Qatar is embarking on a hugely ambitious railway construction programme ahead of a bid for the 2020 Olympics and the Soccer World Cup which it will host in 2022. Kevin Smith examines the four railway undertakings that make up the Qatar Integrated Railway Project. 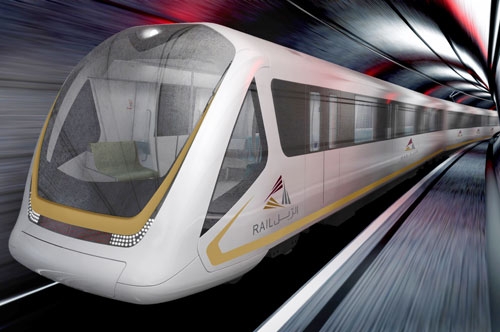 But with temperatures often exceeding 40oC during the Middle East's intense summers, questions were immediately raised by those outside of Fifa's inner sanctum about the practicalities of playing high-octane sport in the desert. Doubts were also expressed about the country's ability to deliver from scratch much of the infrastructure required to host one of the world's largest sporting events.

Air-conditioned indoor stadiums and switching the tournament to the winter have since been touted as solutions to the heat, while a brand new integrated railway network is at the heart of Qatar's infrastructure investments that will serve the estimated 500,000 World Cup visitors, equivalent to more than a quarter of the country's total population.

Four metro lines, a peoplemover, a light rail system, high-speed, and mixed-traffic lines are all at various stages of development in the Riyals 130bn ($US 35.7bn) at 2008 prices, Qatar Integrated Railway Project. Qatar Railways Company (QRC) is leading the rollout of the railway, which is part of the government's Vision 2030 programme which aims to improve the quality of life for Qataris.

Qatar's sporting ambitions are not limited to the World Cup, though. The capital Doha has since announced that it intends to bid to host the 2020 Summer Olympics after it failed in a bid for the 2016 Games. The prospect of hosting the Olympics before the World Cup means that Qatar's rail projects are being accelerated by 18 months, with deputy CEO of QRC, Mr Geoff Mee, stating that 2020 is now the target date to open the first phase of the Doha metro network. "We have already shown a tendency to win these things so our plans are designed with the Olympics in mind," he says.

Phase 1a of the Doha metro encompasses construction of four lines, totalling 75km and 26 stations. It will include 56km of underground lines in single-bore tunnels beneath the centre of Doha, 17km on viaduct through the suburbs, and 5.3km at grade further out. Phase 1b will be completed in time for the World Cup, and will link all six stadia in Doha to the metro network. The additions will extend the network to 123.4km overall, adding another 2.7km of tunnel, 18.5km of viaduct, and 16.8km of line at-grade, and nine stations. The second phase will be completed in 2026, while the final phase will be finshed after 2026. It will include 91 stations and take the network to a total length of 213.3km, 78.5km of which will be underground, 104.7km elevated and 30.1km at grade.

Bidding for the first four tunnelling packages for phase 1a will be launched this month, with Mee stating that QRC is in discussion with "every reputable tunnelling contractor in the world."

Each package will be worth $US 2-3bn and will include two tunnels and construction of stations at Education City and Musheireb, which are expected to be the network's busiest. Winners will be announced in October.

Expressions of interest are also scheduled to be invited in the next few weeks for the network's elevated sections with packages in the range of $US 700-800m on offer. Discussions with potential bidders for railway systems, fitting out of stations and rolling stock supply are expected to commence later this year.

QRC's strict timeframe for construction of the metro means that there is little room for error during the development phases. Design and tender design began in 2011, with construction due to start at the beginning of 2013 and be completed by the end of 2019, ahead of commissioning and testing which will take approximately a year before phase 1a opens in 2020.

A major indication of whether the project is on schedule will be the start of tunnelling work. Mee says discussions with tunnel boring machine (TBM) manufacturers are underway with an order expected as soon as the tunnelling contracts are awarded.

"The key for this to happen is to get the TBMs in the ground, because once we get the tunnels built, we can get in to do the fitting out work," Mee says. "We aim to bore 12-15m per day. Many things are possible in Qatar, but you can't defeat the laws of physics."

While construction of Doha's metro is close to getting started, one project that is already well underway is the 28.4km light rail scheme in Lusail, a new city that is being built 15km north of Doha and will eventually be home to 220,000 people. Doha metro's Red Line will feed into the four-line, 32-station network, and the Qatari Diar Vinci Construction (QDVC) consortium is currently working on the 7.2km underground section.

Earthworks began in March 2009 and tunnel construction exactly a year later. In August 2011 the consortium won a $US 503.5m, 38-month contract for civil engineering work for the network's eight underground stations, a viaduct over a motorway and preliminary works on the depot. The final phase of the tendering process encompasses the contract for the rolling stock and railway systems which is expected to be launched in September and awarded next year.

Lusail's LRT network will require 34 LRVs and Mee says that the authority is very keen to adopt a suitable and reliable catenary-free system for part of the network. "We want to have improved reliability and whether this is with stored battery capacities, or high-speed flywheels, we will see what the industry proposes to us," he says. "If the technology can be proven to have a commercial benefit, then we would like to use an innovative system."

Another rail transport project proposed for the West Bay area is a peoplemover. This 10km, double-track, 19-station line is projected to serve 143,000 passengers per day with a fleet of 66 vehicles, and will interchange with other rail services at Convention Centre and Barwa Financial District stations. However, Mee admits that the plans are currently being re-evaluated due to the complexity of building the network under the high-rise buildings situated in Doha's financial district. "It has to be studied whether the proposed system should be underground, elevated or at-grade," he says.

Rail is also a major part of plans to improve transport links to other regions of Qatar. Specifically mixed-traffic lines which will be electrified at 25kV and will permit speeds of up to 250km/h for passenger services and 120km/h for freight, are planned to reach Dukhan in the east of the peninsula, Abu Samrah on the Saudi Arabian border, Al Zubarah via Madinat Al Kaaban, and Al Shamal via Ras Laffan in the north. The Al Shamal line will eventually interchange with the Doha metro Red Line at its northern terminus at Al Khor North. The journey time from the Saudi border to Doha West station will be 40 minutes.

A dedicated high-speed service with a maximum operating speed of 350km/h is also planned to connect Qatar with Bahrain.

Trains will operate through 25km of tunnel in Doha, running 213km from New Doha International Airport, and 180km from West Bay Central via Education City and Al Zubarah across the planned 40km causeway to Manama in Bahrain. Construction of the causeway will commence this year and will be completed for road traffic in 2016. Work on the railway is due start immediately afterwards.

The causeway is also a key piece of infrastructure in the proposed Gulf Cooperation Council (GCC) railway which will link Kuwait with Oman, and could eventually provide a landbridge for freight services to and from Europe. Mee says that like Saudi Arabia's North-South Railway, Qatar has adopted European technical standards for its infrastructure, but American freight standards including a maximum axleload of 25 tonnes and train length of 1000m.

"There are a lot of projects going on in Saudi Arabia, Oman, the UAE and Kuwait, and it is important that we agree to interoperability standards. Many of us have already signed up for OTIF's cross-border legislation which provides the legal framework for this. We have the opportunity to do that from the start here, choosing from the best that is already available from all over the world."

Indeed, Mee says that the consultants managing the projects are likely to find a United Nations of consortia bidding for the multitude of contracts on offer. With no railway history, Qatar, like many other Middle Eastern nations, is relying on a substantial influx of expatriates to lead and build its projects. And while Mee says this is essential to deliver the high quality required, Qatar does expect to see some domestic return in terms of job creation and knowledge sharing so that eventually Qataris will run their own railway.

"The government isn't going to commit to spending $US 35bn without wanting to see some benefit to the country," Mee says. "We want to marry the best of international technologies and capabilities with local entrepreneurs. For example, in the short term there is an opportunity for a concrete manufacturer to establish a plant here. The same might be said for a manufacturer of escalators given the huge demand for that product over the next few years."

As the world's third largest holder of gas reserves, and largest per-capita GDP, securing funding has not been an issue in fulfilling Qatar's railway ambitions.

Mee says that a public-private partnership model was considered in the early stages, but was ultimately rejected because it was felt that it would eventually cost more than using only state funds.

Various operating scenarios are also being considered, although Mee discounts the benefits of franchising.

He says that the eventual operators might also take heed from Qatar Airways' partnership with British airline BMI with a view of adopting a similar training programme for rail.

"This isn't about price," Mee says. "Anybody can build a cheap railway that doesn't work. This is about delivering a quality project on time within costs while meeting the highest safety standards. In my 40 years of experience I have found that very few people get the chance to build a railway from scratch. We have a great opportunity here, and we want to get it right."

With the clock ticking down until the World Cup and potentially the Olympic Games visit the Middle East there is certainly no time to waste. The pace is relentless, and the challenge immense, but as Qatar embarks on what Mee describes as the largest commercial railway development project in the world, the opportunities for Qatar and railway suppliers over the next few years are bountiful.

"12 months ago there were 12 of us in a portable building in the desert," Mee says. "We have now moved into an 18-storey headquarters building. This shows how quickly things are moving in Qatar."