Sulphur so good for green sleepers

Belgian sleeper manufacturer De Bonte is introducing a new design of concrete sleeper to the market, which uses recycled sulphur rather than cement as a binding agent. CEO Pascal Blommaert explains the development and potential of Thiocrete to Kevin Smith. 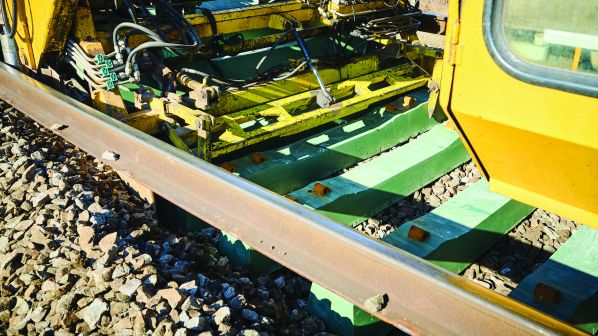 The sulphur-based concrete has the same weight and similar tensile strength as traditional concrete, but a much lower environmental impact. Photos: Infrabel

CEMENT production is a carbon intensive process responsible for an incredible 8% of all global greenhouse gas emissions in 2016. As a core component of concrete, the world’s preeminent building material, reducing this environmental impact is essential if there is any chance of meeting the objectives of the Paris Agreement.

The benefits of using concrete sleepers over wood are well documented. Plastics have been trialled, but Belgian sleeper manufacturer De Bonte hopes that by tweaking the formula for concrete by using sulphur instead of cement and water as a binding agent, it has the recipe for a more sustainable and just as effective product.

Infrabel is the first infrastructure manager to commit to the new sleeper, agreeing a contract in 2020 to purchase 25,000 Thiocrete sleepers, or 10% of its annual sleeper procurement, every year for the next eight years. A ceremony was held in March to mark the launch of installation of the first few ceremonial green sleepers on the line between Puurs and Antwerp. Mass production for Infrabel is set to commence at De Bonte’s plant in Mons, Belgium, in September.

Mr Pascal Blommaert, De Bonte’s CEO, says sulphur concrete has existed as a product for more than 30 years. However, it was not conducive for mass production until 2010 when oil producer Shell came up with an innovative method to simplify the production process using sulphur produced as a by-product of its oil refining process.

Blommaert says Shell approached De Bonte about licensing the use of the method. The industrial process took around two to three years to optimise for sleeper production. De Bonte developed the machinery in-house, building on 20 years of experience in this area, and Blommaert says the process uses around 70% of the existing production line. The major difference is found in the concrete production process. Thiocrete relies on a physical process rather than a chemical reaction between cement and water. With a liquefaction point of 114˚C, the sulphur concrete is heated to 140˚C and then slowly allowed to cool using an automated process. The critical point is between 130˚C and 100˚C where it is especially important to control cooling to ensure all of the sulphur is below the 114˚C point to optimise hardening.

In total this process takes around two hours, a major advantage over concrete, which takes a minimum of 28 days for the chemical reaction to finalise. “After two days it is possible for us to be on a train and in track,” Blommaert says.

Critically, Blommaert says sulphur concrete has a lot of similarities with traditional concrete. It has the same weight and more or less the same tensile strength as well as the same compressive strength. However, it is a lot more kind on the environment.

As well as using unwanted sulphur, the manufacturing process also produces substantially fewer emissions. Thiocrete sleepers are estimated to be responsible for 40-45kg of CO₂ emissions per sleeper compared with 75kg CO₂ for a traditional concrete sleeper, which is linked to the absence of cement. Cement production requires huge kilns which are heated to around 1450˚C, often using fossil fuels, for the calcination process to heat raw materials, mainly limestone and clay mixed with other materials such as iron-ore or ash, to produce clinker. The clinker is subsequently cooled and mixed with gypsum and limestone to produce cement. Production of clinker accounts for 90% of the CO₂ emissions of cement production, which in 2016 generated around 2.2 billion tonnes of CO₂.

In addition, sulphur’s low liquefaction point compared with around 1500˚C for traditional concrete means that it is a highly flexible material. “This is the biggest advantage and it means you can endlessly reuse the material,” Blommaert says. “What you do with concrete is you downcycle, so afterwards you can use it for aggregate. But each time you need to add cement and water. With sulphur concrete you just reheat and reform it and you can do this endlessly.

“Right now the discussion is about reducing CO₂ emissions but in a few years when we have this under control the conversation will shift to circularity and reusing materials. Our process also does not use water, which in some countries is another added environmental benefit.”
Crucially, buyers will not have to pay a premium to install Thiocrete sleepers. At around 5% more expensive, the cost of the product is also comparable with traditional concrete sleepers. In fact, with the cost of cement on the rise, Blommaert expects sulphur concrete to soon become a cheaper alternative.

The first trial application of Thiocrete took place in Belgium as long ago as 2013. Blommaert says the eight-year process to secure the first commercial contract is reflective of the conservative nature of the railway industry. Changes were required to product standards to allow the use of sulphur in concrete sleepers and to tender documents; Infrabel’s tender stipulated that limiting CO₂ production during manufacturing and transport of materials accounted for 40% of the score in the tender with costs 60%, reflecting the infrastructure manager’s increasing desire to procure sustainable products.

The Mons facility has capacity to produce 200,000 sleepers per year, and following success in Belgium, De Bonte is eyeing opportunities in neighbouring markets. Trial installations in track in France and the Netherlands have been in place for two years, and Blommaert is hopeful that infrastructure managers here will follow Infrabel’s lead and embrace sustainable procurement for sleepers.

“I hope this year to get official accreditation from the Netherlands and in France,” Blommaert says. “This will be the first two countries that we target because we are already there and we already know these markets quite well. Of course, we are considering other markets but railway companies are traditionally quite conservative. I expect there will be countries where things go quite quickly and others where things progress quite slowly.”

As well as sleepers De Bonte has secured licensing from Shell to use Thiocrete in cattle grids, roof tiles, sewage pipes, and 2x2m concrete slabs, reflecting its wider potential. Mass production of sewage pipes is already underway and Blommaert says Thiocrete is attractive in these applications because it is not impacted by high levels of acidity. In addition, De Bonte is not tied into sourcing sulphur from Shell, emphasising the flexibility and potential of the material.

Indeed, if the product takes off as Blommaert hopes, he envisages De Bonte licensing production to other sleeper suppliers active in markets around the world. Blommaert says the company has hired a team of business development and financial staff, who are discussing on a weekly basis how this will play out. He expects to finalise the plan for licensing the product in September, which he says is likely to ask for a license fee based on the added value the material offers the supplier.

“For the time being, we want to focus on the installation of the machine because when we start these discussions it will be much better for us to be able to show the machine and how we do it,” Blommaert says.

The environmental benefits of Thiocrete mean that the potential for the product is vast. It could be a busy, but exciting, few years ahead for De Bonte and for infrastructure managers looking to reduce their carbon footprint with sleeper replacement, a logical and straightforward target. “The world is changing and within five years there could be a major transformation in this area,” Blommaert says. “Every country has an obligation to reduce their CO2 emissions and this product is one way to do that.”