Purchasing a ticket to travel could become a relic of the past as new developments change the way passengers pay their fare. Fairtiq CEO, Gian-Mattia Schucan, talks to David Burroughs about how technology is adapting to changing travel habits. 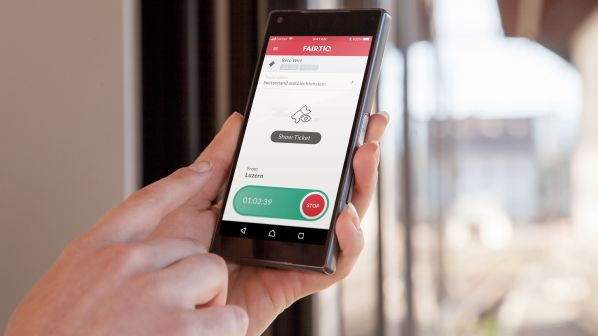 During their journey, the Fairtiq app provides passengers with a ticket that can be viewed and verified by operators and conductors.

AS passengers’ habits continue to change and technology evolves, the traditional model of purchasing tickets before or during a trip is being challenged. Passengers are looking for ease of use, and ways to avoid confusing pricing systems. Commuting patterns are also changing, with an increasing tendency towards home working, reducing the benefits of purchasing standard season tickets and other multi-trip tickets.

And as passengers look for more convenient travel options, the variety of alternative fare-collection systems continues to grow.
One of the most well-known is the Oyster contactless ticketing system used by Transport for London, where passengers tap their pre-paid Oyster Card or any wireless-enabled bank card at both ends of the trip, before being charged the cheapest fare for their journey.

However, Swiss-based start-up Fairtiq is looking to take the convenience offered by such systems a step further by removing the need to tap in and out at stops, instead turning the passenger’s phone into a GPS-enabled ticket.

The system is simple for passengers to use, says Fairtiq CEO and founder, Mr Gian-Mattia Schucan. As they hop onto a train, metro, tram, bus or even ferry, the passenger swipes the “start” button in the Fairtiq app to begin the journey. They can then travel across multiple modes of transport, before swiping the “stop” button when they arrive at their destination.

During the ride, the app provides a ticket that can be viewed and verified by operators and conductors. After the trip has been completed, an algorithm uses the phone’s GPS and other metrics to determine how much the passenger should be charged, which travel modes were used, and how much of the fare should be paid to each operator.

The system can also determine if passengers have walked for part of the journey, and removes this from the charge. If the value of a single ticket exceeds the price of a one-day ticket, the customer only pays the lower fare.

Schucan says the benefits of a system like Fairtiq became apparent while he was head of sales at Swiss Federal Railways (SBB). He left SBB and launched Fairtiq in 2015, working with three clients to develop and test the system before launching it in April 2016. By March 1 2018, the system covered all public transport across Switzerland and is now used by more than 30 partners across the country. The app’s 50,000 active monthly users are now making 350,000 trips a month, with the number rising by 10-15% each month.

Attempts to develop a similar system in the late 1990s were unsuccessful. However, Schucan says a combination of new technology and the partnerships developed during the launch of the project made it a success this time around.

“We’re in a neutral position where we’re very much trusted in that regard as we’re not affiliated to SBB or any other big operators,” Schucan says.

The idea of the system requires a level of trust both between the passengers and the app; that they will be charged the correct - and cheapest - fare. And between the operators and Fairtiq; that they will receive their fair share of the fare for multi-modal trips.

“That was the trust we got very quickly,” Schucan says. “People start with short trips and then they go ‘oh it works’ and then they try longer journeys.”

The company is also using machine learning to continue to develop the algorithms that calculate the fare and determine whether a trip was taken by bus, tram, boat or train. While the company is completely independent, Fairtiq has continued to develop a strong relationship with SBB. The Fairtiq system was incorporated in SBB’s BundesBahnen Mobile Preview app in 2018, allowing passengers to use the service without needing to download Fairtiq’s app. Following the success of that trial, the system will be merged into the main SBB app in 2020.

As the system has not yet reached a point where it could operate as a standalone ticketing system, operators still require more traditional ticket structures and infrastructure such as ticket machines for those passengers not using Fairtiq. Instead, Schucan says it is complementary to these systems while allowing operators to reduce the number of ticket machines required, thereby reducing maintenance and operational costs.

The system also collects useful data which at an anonymised level can be used to improve the app, as well as improving the transport services.

“You can see where people have been travelling and plan services around that,” Schucan says.

The system is now in use outside Switzerland, with the launch of the Fairtiq Vmobil app in Austria on September 27 2018 in cooperation with the Vorarlberg Transport Network (VVV) for travel in Vorarlberg and Liechtenstein. Plans are also being developed to allow cross-border journeys between Switzerland and Austria, while operators in Germany and The Netherlands have expressed interest in trialling the system.

Fairtiq is also making strong inroads in Britain, and last year was selected as one of 10 start-ups to take part in the Billion Journey accelerator project sponsored by Go-Ahead, which focuses on simplifying the use of public transport and improving the travel experience for passengers. Following the completion of the project on January 23, Fairtiq was named the “most promising product” and signed a contract with Go-Ahead to introduce the system on a trial basis in Britain.

The partnership is an important one for Fairtiq, as the British public transport market varies significantly from that in Switzerland, where the purchase of a single ticket makes it possible to travel across the country using any means of transport. With a largely privatised network in Britain, and numerous transport operators, passengers often have to purchase separate tickets for travel on different modes of transport - an issue Fairtiq believes it can solve.

The introduction of a system that automatically calculates the cheapest fare across modes and operators could come at an important time in Britain, as the rail industry debates the country’s complex fare structure that currently offers around 55 million fares.

A study by Britain’s Rail Delivery Group found 84% of people want to see the fares system reformed, while 88% wanted changes to how tickets are sold.

As Fairtiq and other mobile-ticketing developers continue to challenge the traditional forms of fare collection, they offer an alternative that could become the norm.