Switzerland is investing heavily to increase capacity on the country’s rail network to keep up with demand and to achieve much higher train frequencies and shorter journey times. David Briginshaw and Anitra Green report. 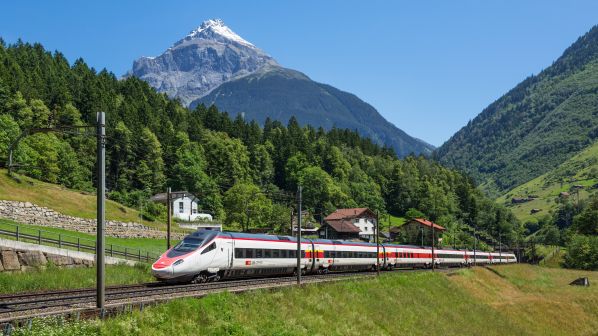 SWITZERLAND’s well-coordinated and reliable rail network is highly appreciated by its population. Passenger-km has more than doubled since the 1980s while freight tonne-km has grown by about 40%. According to government forecasts, passenger traffic is expected to increase by 51% to around 2 million journeys by 2040, with traffic doubling in the Zürich-Winterthur area and around Lake Geneva. Rail freight will grow by about 45% with the greatest rate of growth predicted on the east-west corridor.

To meet these growth predictions, the government has drawn up its Strategic Expansion Programme (Step). The first stage, Step 2025, is designed to increase capacity at major rail hubs such as Geneva, Basle and Bern at a cost of SFr 6.4bn ($US 6.5bn). Under Step 2035 - the second stage - the federal council has proposed around 200 projects costing SFr 11.5bn with the objective of increasing capacity still further. The Step programme includes some major infrastructure schemes to relieve serious bottlenecks on the rail network.

The double-track Zürich - Winterthur line is used by 670 trains per day and is operating at maximum capacity between Effretikon and Winterthur. The solution is to construct the 9km Brütten tunnel comprising two tubes, each 10m in diameter. The tunnel will have one portal east of Bassersdorf on the line to Zürich Airport and a second portal near Dietlikon on the line to Zürich Stadelhofen and Zürich Main Station. The two branches will merge into one tunnel running to Tössmühle southwest of Winterthur. Completion of the Brütten tunnel will allow up to 900 trains to operate between Zürich and Winterthur per day.

Another major bottleneck is the partially single-track line between Zürich and Zug which already handles 210 trains per day. After the completion of Step 2025, the line together with Thalwil station will be full. Another tunnel is proposed: the Zimmerberg Base Tunnel II between Thalwil and Zug, and Swiss Federal Railways (SBB) will prepare a concept study for the tunnel by the end of this year. Construction of the tunnel will increase the number of long-distance trains running on the line from Zürich to Rotkreuz, between Zug and Lucerne, to up to six/hour/direction and cut the journey time between Zürich and Zug by 6 minutes.

Other important initiatives include capacity expansion on the south side of the Jura between Yverdon, Lausanne and Geneva as well as the construction of a direct line between La-Chaux-de-Fond and Neuchatel.

Step 2025 will result in the following improvements to train services:

Step 2025 will also  provide funds to plan for the elimination of bottlenecks on three lines: Aarau - Zürich, Zürich - Winterthur and Zürich - Zug - Lucerne, as well as creating the prerequisites to expand S-Bahn/RER services in the Bern, Basle and Geneva areas.

Step 2035 will facilitiate even greater improvements to train services, including:

In addition to the Step scheme, work is continuing on the SFr 5.4bn ZEB investment programme, which is a continuation of the Rail 2000 national rail development plan. By 2025, ZEB will allow the operation of 400m-long double-deck trains on the west-east axis, the elimination of bottlenecks on the access routes to the St Gotthard and Ceneri Base Tunnels, improved schedule stability and punctuality despite the increase in traffic, and increased security of supply for SBB’s energy network.

These base tunnels are transforming rail transport across the Alps with much shorter journey times for both passenger and freight trains and greater capacity for freight traffic moving between Italy and Germany.

The SFr 22.8bn 15km Ceneri Base Tunnel is due to be completed by the end of this year. This is the final element of the hugely ambitious New Railway Links through the Alps (Neat) project which saw the construction of the 35km Lötschburg Base Tunnel followed by the 57km Gotthard Base Tunnel. These base tunnels are transforming rail transport across the Alps with much shorter journey times for both passenger and freight trains and greater capacity for freight traffic moving between Italy and Germany.

Older tunnels on the Gotthard route are being enlarged and other obstacles removed to complete Switzerland’s role in creating a corridor for the transport of 4m-high lorry semi-trailers by rail from northern Europe to transshipment terminals in northern Italy. As Mr Jacques Boschung, head of SBB Infrastructure, observes, the Chinese are investing in the development of the Ligurian ports in Italy, so there are going to be even more freight trains on this route in future.

“We want to be as customer-oriented as possible,” he says. “We have a good team, and people are motivated. After all, business is a team sport.”

Switzerland is also investing SFr 1.1bn to improve connections to the European high-speed network to shorten journey times to Lyon, Paris, Stuttgart, and Munich. This work is also expected to be completed by the end of 2020.

The huge amount of construction already underway and planned will be a major logistical challenge for SBB. Managing construction sites to avoid delays to trains should improve soon by synchronising the work with the actual amount of rail traffic passing through the area.

SBB Infrastructure has 10,000 employees working around the clock, and Boschung plans to engage another 200 to prepare for the increased workload. “We want to be as customer-oriented as possible,” he says. “We have a good team, and people are motivated. After all, business is a team sport.”

The Swiss railway industry is not relying on infrastructure improvements alone to create the capacity needed to cope with rising traffic as it will harness the benefits of digitalisation and the potential of new technologies under the Smartrail 4.0 programme. This will enable SBB to further increase capacity and safety, make more efficient use of railway infrastructure and reduce costs.

However, Boschung says there are significant problems regarding compatibility of the latest software releases or baselines with older on-board equipment, forcing many train operators to install new on-board equipment. “We have some rolling stock that’s 45 years old,” Boschung says. “Our world is heavily influenced by the past, with a long history of rail technology.”

Switzerland, as an early user of ETCS Limited Supervision to replace its conventional signalling, has introduced a moratorium on its planned roll-out of ETCS Level 2 due to cost and capacity concerns, adding to fears about GSM-R obsolescence from 2030 onwards when the railway supply industry’s guaranteed support for GSM-R comes to an end. GSM-R is due to be replaced by the Future Railway Mobile Communication System (FRMCS) currently being developed by the International Union of Railways (UIC).

“We have a lot to do: increase capacity, lower costs, and bring software up-to-date,” Boschung says. “It’s not just for the sake of increasing digitalisation, it’s a case of modernising the system. We have to innovate in order the keep up with the rest of the world - we have no choice.”