The opening of the first stage of the Sydney metro project on May 26 heralds a new era of passenger rail transport, not just for Sydney, but Australia as a whole, as Mark Carter explains. 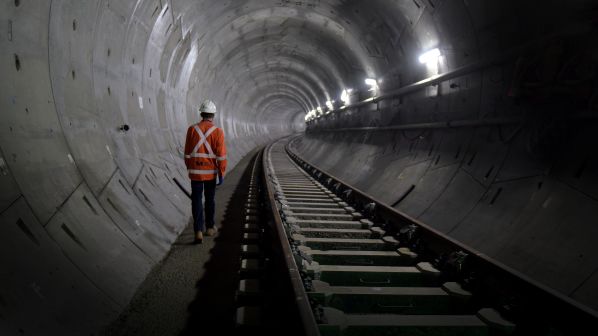 IN a major departure from its reliance on a surface commuter rail for the Sydney area, the New South Wales (NSW) state government has adopted driverless metro operation, much of it underground, for most of its future network expansion. The first line opened on May 26, an extension will open in 2024, followed by a second metro line and a link to Sydney’s new airport.

Australia’s largest city, Sydney is experiencing the same congestion challenges facing most major global cities as a result of continued population growth. Medium growth forecasts predict that Sydney’s current population of around 5 million will reach more than 6 million by 2027, and 8.3 million by 2050.

The newly-opened $A 8.3bn ($US 5.7bn) Sydney Metro Northwest Line is Australia’s most costly public transport project to date and was first envisaged in 1998 as an extension of the heavy rail suburban network to Sydney’s expanding north-western suburbs.

Progress was severely hindered with frequent politically-influenced policy changes and government budgetary constraints over a 15-year period. Political change in 2011 saw firm plans implemented for the project and tenders for major works called by early 2013.

Much of the 23km line between Tallawong and Epping is underground with 15.5km in twin tunnels between Bella Vista and Epping, plus a 4.4km viaduct between Kellyville and Rouse Hill. At Epping, the new line connects with the former Sydney Trains 13km Epping - Chatswood line which was converted for metro operation during an eight-month shutdown.

"The metro trains have longitudinal seating with seats for 378 passengers, and a total capacity of 1100."

The 13 stations on the line will be the first in Australia to be equipped with platform screen doors. Chatswood will be the major interchange between Sydney Metro Northwest and the Sydney Trains network for access to the city centre until the Sydney Metro City and Southwest extension opens in 2024.

Rolling stock is provided by 22 six-car Alstom Metropolis EMUs built in Sri City, Andhra Pradesh, India. Power supply is 1.5kV dc overhead, similar to the rest of the Sydney suburban network, however, the single-deck trains are a major departure from Sydney’s double-deck commuter fleet. The metro trains have longitudinal seating with seats for 378 passengers, and a total capacity of 1100. The rolling stock maintenance facility and operations control centre are based at the northern end of the line at Tallawong.

The trains are fitted with Alstom’s Urbalis 400 CBTC system which ensures trains are capable of operating automatically at all times including door closing, obstacle detection and in emergency situations.

Sydney Metro Northwest is not only the first line in Australia to have driverless trains, it is also the first to have been built and operated by the private sector from the outset, albeit under contract to the NSW government. The Northwest Rapid Transit Consortium (NRT) comprising MTR, John Holland, Leighton Contractors, UGL Rail Services and Plenary Group won the $A 3.7bn Public Private Partnership (PPP) contract for the trains and systems, which includes a 15-year operation and management contract. However, ticketing and pricing for the metro will remain within NSW’s existing Opal Card regime.

In another first, services will not be timetabled, but operate on a turn-up-and-go basis for commuters with 4-minute headways during peak periods. Sydney Trains has introduced additional services on the North Shore Line during the morning peak in preparation for the thousands of commuters who will change to and from the metro at Chatswood each day.

This interchange will disappear in 2024 when the second stage of the metro opens between Chatswood, the city centre and Bankstown southwest of Sydney.

Major works on the $A 12.5bn Sydney Metro City & Southwest extension started last year. The 30km extension will comprise a completely new line with seven stations running from the current terminus at Chatswood, under Sydney Harbour and through the central business district before taking over the existing heavy rail line to Bankstown which will be converted for metro operation. The 11 existing stations on this section will be upgraded.

Tunnelling commenced last year with four of five tunnel boring machines now in the ground to complete 31km of tunnels between Marrickville and Chatswood. A fifth machine has been specially designed to bore the twin tunnels under Sydney Harbour.

Evaluation of the trains, systems, operations and maintenance tender is currently underway. At the end of 2018 Sydney Metro executed a Contract Finalisation Deed with Northwest Rapid Transit - the consortium delivering stage 1 of the Sydney metro - for the potential alteration of their contract to take into account the delivery of extra trains and some key rail systems for stage 2, as well as the operation and maintenance of the entire line.

Even though the two stages are being procured under different contracts and are several years apart, the OTS augmentation provisions allow it to operate as one integrated line. This means the contract for stage 1 can be altered to include elements for stage 2.

Major civil works will start this year at a number of sites, including the extensive works required to transform the interchange at Sydney Central between existing heavy rail services and the metro.

Together with signalling and infrastructure upgrades across the existing Sydney rail network, the number of trains entering central Sydney will increase from about 120 per hour up to 200 beyond 2024, an increase of up to 60%.

Sydney Metro West will be a new 25km underground line linking the centres of Parramatta and Sydney. This $A 18bn-plus project is the city’s most ambitious metro scheme as it will double rail capacity between the area’s two biggest commercial centres.

Sydney Metro West will serve Greater Parramatta, Westmead, Sydney Olympic Park, the Bays Precinct and Sydney city centre. It is expected to open in the second half of the 2020s. The NSW state government has so far allocated $A 6.4bn in future budgets towards the cost of the project.

A journey time of around 20 minutes is envisaged between Parramatta and Sydney, compared with 26 minutes today by commuter rail.

The current scope of the works includes:

Contract procurement and subsequent delivery of works, goods and services for Sydney Metro West is expected to start this year. Given the scale of the project, the first major contracts will be for tunnelling. The potential for greater private sector participation through a PPP is being investigated.

With a decision having been made in March 2018 on the location of Sydney’s second international airport at Badgery’s Creek, the federal and state governments announced that the airport, together with an associated manufacturing, research, medical, education and commercial hub, to be known as Aerotropolis, will be served by an initial 22km metro-style link. Airport link passengers will interchange with the existing Sydney Trains suburban network at St Marys on the Sydney - Emu Plains line.

A detailed business case, to be delivered by the end of 2019, is already underway to consider final corridor identification, station locations and detailed costs.

The two governments have agreed that they will construct the line as equal partners with the federal government suggesting its previously announced share of $A 3.5bn will come from the $A 10bn National Rail Programme announced in the 2017-18 federal budget.

The NSW government has so far allocated $A 2bn over the next four years, while a market sounding process will also be used to test private sector interest in station developments and explore innovative financing solutions.


The Metro is a bold and expensive experiment by the NSW state government.

Sydney Metro is a major departure for Sydney’s public transport, breaking a more than two-decade reliance on heavy rail and double-deck trains for the city’s suburban rail needs. The Metro is a bold and expensive experiment by the NSW state government, but something that was sorely needed following years of inertia in transport policy planning.

Sydney often sells itself as “Australia’s only global city” so arguably a largely-underground metro is something that will help further enhance that claim.

The shift in emphasis has not been without its critics, but with work on the second stage Sydney Metro City and Southwest Line now well underway, there is no turning back on the commitment to this mode for future rail expansion in Sydney.

TRACKLAYING is complete and trial running has commenced on sections of Sydney’s troubled 12km South East Light Rail project. Most of the line is expected to open in December, almost a year behind schedule and $A 500m over budget.

The $A 2.1bn ($US 1.45bn) project has caused major disruption for local businesses along the route during construction with many claiming severe hardship despite a compensation scheme operated by the NSW government. Additionally, a $A 1bn lawsuit lodged by major contractor Acciona, against Transport for NSW, alleging “misleading or deceptive conduct” before signing the design and build contract in 2014, has also cast a cloud over the project.

The line, which will have 19 stops, extends from Circular Quay along George Street to Central station, and then through Surry Hills to Moore Park with branches to Randwick and Kingsford. Work on the latter branch is behind schedule and will not open before March 2020.

The existing 12.7km long Inner West light rail line connecting Dulwich and Central station, which carries more than 9.7 million passengers a year, will connect with the new line at Central station. The two lines will be incorporated under the Sydney Light Rail banner.

Integration of local bus services with the light rail network is aimed at improving public transport access to major sporting and entertainment facilities at Moore Park and Randwick, along with the University of NSW and health precincts. Services will be stepped up to provide extra capacity for major sporting events.

Transdev, which has the contract to operate light rail services, has begun recruiting drivers, and training is expected to start soon on the 60 Alstom Citadis X05 LRVs being delivered for the project.

Light rail will also form a major part of the NSW government’s revitalisation of Sydney’s western suburbs. Contracts were signed in December 2018 for the $A 2.4bn 12km long Parramatta Light Rail Stage 1. The line will open in 2023, and will run from Westmead via Parramatta to Carlingford and then along the existing commuter rail line to Camellia.

Paramatta Stage 2 will connect with Stage 1 at Camellia and run via Ermington, Melrose Park, and Wentworth Point to Sydney Olympic Park. The 9km line will provide travel times of around 25 minutes from Sydney Olympic Park to Camellia, and a further eight minutes to Parramatta where it will connect with the planned Sydney Metro West. The NSW government is considering a final business case for Stage 2, with an investment decision and details on the timing of construction to follow.