Vossloh Cogifer has developed maintenance-friendly switch machines for use on standard sleepers or in box sleepers, thereby allowing automatic tamping of the trackbed. Their latest application is on two very different railways: a heavy-haul line in northern Sweden and on the recently-completed Ankara - Konya high-speed line in Turkey. 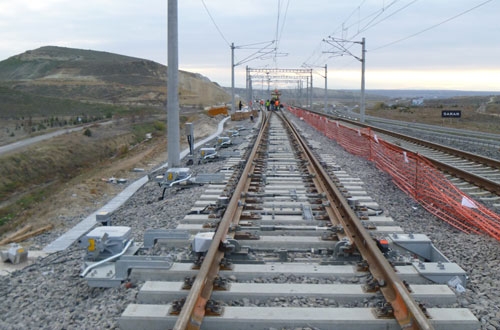 THE Malmbanan links Sweden's Arctic iron-ore mining regions of Malmberget and Kiruna with the port of Luleå on the Baltic Sea as well as Narvik on Norway's Atlantic coast. The maximum axleload is currently 30 tonnes, but this could be increased in the future. The region is known for its severe winters with very low temperatures and heavy snow. These technical and climatic conditions pose a great challenge for switch systems and track maintenance.

Moreover, maintenance work is impeded by the fact that in Sweden switch machines are traditionally nested between the sleepers, which rules out any automatic tamping in the switch zone. Yet manual tamping entails much more work along with the risk of inadequate compacting of the trackbed.

Vossloh Cogifer's Easyswitch-R is an electro-hydraulic switch machine suitable for use in the Nordic winter. The entire unit has been integrated into a steel sleeper which has the dimensions of a standard sleeper and is protected against frost, ice and snow by a cover. Since rods do not protrude into the ballast, the trackbed can also be tamped automatically in this area. Furthermore, the unit's design allows less maintenance work, as there's no need to grease the components - in fact, the latter can be replaced in less than 15 minutes, if required.

Vossloh Cogifer won a €100m 10-year contract from Trafikverket in 2010 to supply Easyswitch-R for the Malmbanan. Six weeks after the first four machines were installed in a switch, the units were exposed to high humidity and temperatures of -37oC.

Easyswitch not only moves the switch blade back and forth, it also ensures secure locking in the desired blade position. The design uses proven but reconfigured electrical and mechanical components. Safety elements such as the Verrou Carter Coussinet (VCC) point-locking mechanism and external Paulvé detectors have proven themselves for many years on more than 50 large railways.

The VCC point-locking mechanism is connected to the switch blade, and stock rail and rests on the sleeper. It secures the switch blade in its closed and open positions, making it impossible to force open a closed blade. The detectors that measure the blade's opening and closing/locking phases are located directly on the frame of the locking mechanism.

The switch machine can also be fitted with an electric heater. Independently of this, an elongated hole allows for expansions and contractions of +/-55mm.

The modular design offers advantages when it comes to logistics and servicing while at the same time consuming less power than any comparable system. Development work was completed according to the EN 50126 standard and strict climatic tests.

This philosophy was also applied in developing the in-sleeper switch machine for Turkey, which is based on a multi-motor, electro-mechanical switch actuator. A total of 83 in-sleeper switches were installed on the Ankara - Konya high-speed line, which opened in August 2011. The longest switch has a geometry of 1/46 and can be negotiated at a maximum speed of 170km/h onto the deviating track. The line has a maximum axleload of 22.5 tonnes.

High-speed switches pose special challenges regarding safety and quality. Due to their exceptional length, the blades of high-speed switches have to be actuated simultaneously at several locations to ensure smooth and gentle movement. Also, the switch blade position has to be monitored redundantly and accurately so that any blockage, for example by a stone, is detected in good time.

Until now, Vossloh Cogifer has offered switches based on a single actuating unit with mechanical back drives. However, a multi-motor system was supplied for the new line in Turkey which simplifies track maintenance. Rather than using a complex and costly electrical system to synchronise the point machines, a mechanical system was used that is capable of synchronising up to 10 switch motors.

As there are currently no national standards for building high-speed lines in Turkey, French standards were adhered to. The VCC point-locking mechanism was used, which also conforms to International Union of Railways (UIC) standards, along with Paulvé detectors.

The MCEM91 switch, which weighs less than 100kg, uses a single-rod electro-mechanical motor which can be directly integrated into the concrete sleeper unlike a three-bar point machine. As rods do not protrude into the ballast, the trackbed can be tamped automatically in the switch area. The integrated push rods move in a recess located in the concrete sleeper and are protected against dust and moisture.

For safe locking and detection, the MCEM91 is equipped with internal electric contacts that are activated when the safe position is reached. To both enhance safety and reduce cabling, they are series-connected by safety contacts and a four-wire system with the external Paulvé detectors.

For the Turkish project, a 380V, 3-phase 50Hz power supply was chosen. However, for other applications, the switch can be operated by a variety of electric motors, such as 230V ac, 220V dc, or 110V dc, and equipped with additional devices such as internal temperature control to prevent condensation, or a counter.

The unit can also be controlled manually. In this mode, energy supply is disconnected and operation is via a lever. Moreover, the unit can be delivered in various configurations. The stroke can be adjusted on-site between 100 and 260mm.

For environmental reasons, only electro-mechanical systems are used rather than electro-hydraulic ones to avoid oil seepage into the soil.