It has taken an international effort with high levels of support from France, but Morocco has successfully brought high-speed rail services to Africa. David Burroughs reports from Tangier on how the country’s high-speed network is performing. 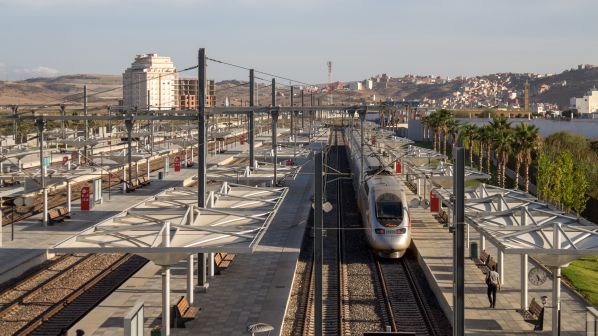 NEARLY a year after the opening of Africa’s first high-speed line, Moroccan National Railways (ONCF) says it has achieved the delivery of a world-class system.

The first 183km line linking Tangier, on the Strait of Gibraltar, and Kénitra, north of the capital Rabat, opened on November 15 2018 and as of October, punctuality, measured by services arriving within two minutes of their scheduled time, was sitting at 96%. Passenger satisfaction is also a comfortable 92%.

Around 6800 services have operated since the line was opened by King Mohammed VI of Morocco and French president, Mr Emmanuel Macron, carrying more than 2.5 million passengers.

Construction of a high speed network to reduce travel times between major centres in Morocco was first suggested in 2006, and a Memorandum of Understanding (MoU) was signed between Morocco and France in 2007, resulting in French National Railways (SNCF) playing an important role in the development, planning, construction and operation of the project.

The first phase of the network involved the construction of the Tangier - Kénitra line and was complemented by upgrades to the conventional Kénitra - Rabat - Casablanca line to reduce the Tangiers - Casablanca journey time from 4h 45min to 2h 10min.

“Punctuality, measured by services arriving within two minutes of their scheduled time, was sitting at 96%. Passenger satisfaction is also a comfortable 92%.”

Declaration of a public utility was achieved in 2009 and financial closure for the €1.8bn project was reached in 2010. The Moroccan government provided €500m from the state budget and the Hassan II Fund for Economic and Social Development. The French government contributed €625m in the form of a concessional loan and a €75m grant, with the French Development Agency (AFD) providing a further €220m. Financing was also drawn from across the Arab states, including Saudi Arabia Fund for Development (€144m), the Abu Dhabi Fund for Development (€70m) and the Kuwait Fund for Arab Economic Development (€100m).

Work on the line began in 2011 with an expected completion date of late 2015, but this was delayed due to difficulties completing land acquisition and subsidence along the route. A consortium of Ansaldo STS (now Hitachi Rail STS) and Cofely Ineo was awarded a €120m contract in April 2013 to supply and install signalling and telecommunications systems and the line’s centralised traffic control centre, which is located in Rabat.

Services on the line are operated with a fleet of 12 double-deck TGV Duplex trains supplied by Alstom, two fewer than the initial 14 ordered in December 2010. The trains are formed of two power cars and eight intermediate trailers, including two first class, five second class and one buffet vehicle, seating up to 533 passengers. The trains operate on 25kV 50Hz ac on the high-speed section of the line and 3kV dc on the conventional line. The fleet is based on the TGVs introduced in France in 2011, but have modified HVAC systems adapted to the African operating climate and an updated ERTMS system, which was designed to operate with the 3kV dc power supply.

The fleet is maintained at a 40-hectare facility adjacent to the line and south of Tangier Ville station, which has the capacity to carry out level 1-3 maintenance tasks as well as some level 4 tasks related to spare parts. A smaller facility capable of carrying out lower-level tasks is located at Casablanca. The facilities are managed and operated by Siana, a 60:40 joint venture (JV) between ONCF and SNCF, with a stated aim of achieving the operational performance levels maintained by SNCF’s fleet of TGVs in France.

The Tangier site, which has direct access to the high-speed line at both the north and south entrances, has 40km of track on site and a 2000m² main workshop with four tracks which are equipped to enable work above and below the double-deck trains. The site also has facilities to replace and repair bogies and machine wheelsets, along with equipment to empty the sanitary tanks and wash the exterior of the 200m-long trains, with both tasks taking around 20 minutes each.

The regular timetable requires eight trains to be in operation each day, but this can be increased during high-demand periods such as holidays.

Maintenance is carried out on a preventative or corrective basis.

While the launch of the Tangier - Kénitra high-speed line is a major achievement, Morocco is planning to go bigger, with the fulfilment of its plans to construct other lines and improve mobility across the country.

Morocco’s 2040 Rail Strategy (PRM 2040), a long-term plan for the development of the national rail network and its various components, was announced by King Mohammed VI in 2015. It includes maintenance or improvement projects to boost the resilience of the existing network and improve performance by, for example, removing bottlenecks.

The conventional 160km/h network will be expanded to connect with 43 cities, up from the 23 currently served, while the number of rail-connected ports will double from six to 12.

ONCF told IRJ last year it is planning a 1500km network of high-speed lines as part of PRM 2040.

As of March 2018, preliminary studies had been completed for the alignment and tunnels for the Marrakech - Agadir high-speed line, while detailed studies for the extension of the Tangiers - Kenitra high-speed line to Casablanca had been concluded.

Time will tell how many of these projects come to fruition by the 2040 deadline, but ONCF is keen to continue the momentum gained during the construction of the high-speed line and carry on utilising and developing the skills and knowledge it has brought to the country.

Morocco in numbers. Morocco has a 2295km-long network with 3815 track-km, with 64% of the lines electrified. ONCF operates 204 passenger services and 80 freight services each day, carrying 35 million passengers and 27 million tonnes of freight and phosphates each year.