Tel Aviv is on course to open its inaugural light rail line in October 2021. Kevin Smith gets an update on progress with the Red Line, the backbone of the system, and further projects as the Israeli city attempts to improve mobility for citizens. 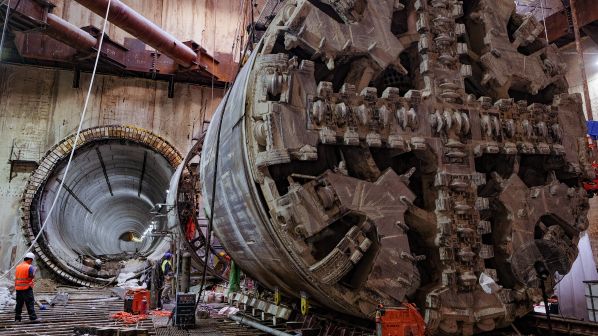 Excavation of the 10km dual bore tunnels for the Red Line is nearing completion in central Tel Aviv. The line is on course to open in October 2021.

CLOCKS hanging on the walls of Tel Aviv Metropolitan Mass Transit System’s (NTA) offices in Tel Aviv are all counting down to what will be a monumental event for the Israeli city: the opening of the 25km light rail Red Line, the city’s inaugural mass transit service, in October 2021.

The long-awaited project is the first of a three-line light rail network, which promises to transform transport in the city which, while well-served by buses, suffers from chronic traffic congestion.

Thankfully for the clock watchers, the Red Line is very much on time.

Mr Anthony Burchell, Red Line project director at the project management consultant, WSP, which was appointed to manage the project and system for 10 years under a $US 233m contract in 2014, told IRJ in mid-January that just 1km of the 10km twin-bore tunnel section remains under construction. Concrete and foundation work are also well underway on the at-grade sections.

The tunnels run from a branch to the line’s depot at Kiryat Arye and from Geha Interchange, west of Shenkar station in the northwest to Manshiyya/ Neve Tzedek east of Ben Zvi station where the line continues at-grade for 10km, serving 13 stations before reaching the terminus at Bat Yam. An additional 5km at-grade section with six stations runs east from Shenkar to Petrach Tikva Central Bus Station.

Burchell reports that the outer box is complete at all 10 stations on the underground section with work underway on the inner box at four stations. The most advanced is Allenby where fitting out is expected to begin by the middle of the year. Burchell anticipates that structural work at each station except Carlibach, a future interchange with the Green Line, will be completed by the end of 2019.

The underground stations will double up as civil defence structures with thick concrete walls and blast-proof doors, reflecting the heightened security in Tel Aviv’s public areas. A further 800m cut-and-cover tunnelled section will run at the southern end of the underground section making use of an existing cutting on the disused Turkish Railway to Jaffa Port. Burchell says the city wants to preserve the old stone walls from the railway and will introduce a cycle path and park above the tunnel, providing a pedestrianised boulevard from central Tel Aviv to Jaffa and the beach. “The walls are finished and the roof slab is virtually complete,” Burchell says. “That tunnel will be ready by the end of this year.”

On the surface sections, 5km of concrete work is already complete and Burchell says the systems contractor, the Chinese consortium of China Railway Tunnel Group (CRTGB) and China Railway Electrification Bureau (EEB), is set to begin installing 1.5kV dc overhead line electrification in the next few months. Voestalpine has delivered more than 50% of the rail required for the project. These rails are in storage at the depot site where civil works are complete. The contractor is preparing to begin laying track here and on the at-grade sections next month. German Rail (DB) is managing integration of all systems for the project.

Delivery of the first two pre-series LRVs by CRRC Changchun Railway Vehicles is set to take place in autumn 2019. Fabrication of one vehicle is already complete and Alstom technicians are currently in China installing onboard signalling equipment ahead of testing on the manufacturers’ test track. Full series production of the remaining 88 vehicles is set to commence following delivery of the first two LRVs.

Alstom is also installing its Urbalis 400 CBTC signalling equipment on the underground section where the trains will operate in ATO at Grade of Automation (GoA2). Depot operation will be fully automated while line-of-sight driving will be used on the at-grade sections with Alstom installing a speed supervision system, which will automatically deploy the brakes if a specified speed is exceeded. The line will also utilise an LTE digital radio solution rather than Tetra following a request by the Israeli Ministry of Communications. Burchell says that design of this system by CRTG and local subcontractors is underway.

The Red Line is Tel Aviv’s first major tunnelling project, which inevitably presents challenges. The presence of soft sandy cemented ground conditions with a high water level raised concerns about the stability of the tunnel face. However, tunnelling contractor, CRTG, delivered sophisticated earth balancing tunnelling machines, as specified by WSP, and Burchell reports that the work has gone very well with settlements of just 5mm and a production rate of 20-30m per day, which is more than expected.

“One thing that we did which was very interesting is because the tunnelling shafts were already built as an advanced contract by the client [NTA], we were able to order the tunnelling machines very quickly from the contractors,” Burchell says. “We made use of that by driving the tunnels through the station boxes, with just the perimeter wall of the station strutted. This is enabling us to complete the tunnelling a year earlier than our original programme.

“There were concerns about how we would manage excavating and breaking out the tunnels, but we have done that now at each of the 10 stations and that has gone very well,” Burchell continues. “It is a method of construction not widely used - I know they did it at London Paddington station on Crossrail and on Chennai metro - and I would encourage people to look at it.”

Further tunnelling challenges were encountered on the section under the Israel Railways’ main line, a six-lane highway, and the Ayalon River close to Arlosoroff station. Here Burchell says CRTG faced tunnelling through redundant reinforced concrete piles from a retaining wall for the river which was rebuilt around 30 years ago. He says that CRTG spent a lot of time and effort in laboratories in China to develop a 1:4 model of the TBM in order to modify the design of the cutters so they are able to cut through the piles. Usually workers would have to remove such obstructions by hand.

“IR was very nervous to start with and they shut the main line for one weekend while we tunnelled underneath,” Burchell says. “We demonstrated that it was very well controlled and increased the face pressure and the grouting pressure while maintaining less than 5mm movement. During our subsequent crossings, they proceeded with only supervision and reduced speeds on the line.”

As well as physical difficulties, the project has faced cultural challenges. The Shabbat, the Jewish holy day, is strictly observed by certain sectors of the population, particularly orthodox Jews. No vigorous work is permitted from a few minutes before sunset on Friday evening until Saturday evening.

However, Burchell says this is not practical with tunnelling, where for safety reasons the work often has to continue uninterrupted. Fortunately, an agreement was eventually reached with leaders in the area and work was allowed to proceed, although it is avoided when possible on the Shabbat.

This agreement reflects the close cooperation between NTA and the contractors and the general public throughout the project. “The new municipalities want to have their say in what we are doing and what it looks like, and getting permits from them has its challenges,” Burchell says.

“This is something NTA has managed extremely well. They also engaged extensively with the public. They have events, and show them what is happening. When the rolling stock mock-up arrived, they put it on display in Rothschild Boulevard in central Tel Aviv. They have also involved the public in organised lectures. It is about really engaging with the people and letting them have a say. They showed various layouts of the different stations and put it out to public consultation. It is very much a people’s metro.”

The desire on both sides to engage reflects the anticipated impact on the public of the complete light rail network. Once open, 35% of the population will live within walking distance of a station while the network will provide connections for 45% to within walking distance of their workplace. The network will be operated by a consortium of Egged Group (51%), Shenzhen Metro (30%) and China Civil Engineering Consortium (19%) under a 10-year contract signed in August 2017 and is expected to serve 70 million passengers per annum.

NTA is keen to maintain its close relationship with the public as it proceeds with subsequent phases. The 39km Green Line will link Aba Even in Herzeliya and Neve Sharet in the north with Bat Yam, Holon and Rishon LeZion in the south with a 4.5km underground section beneath the city centre. The line will have 62 stations, four of which will be underground. A fleet of around 120 LRVs will be required and annual ridership is forecast at around 65 million.

The 29km Purple Line will connect Yehud and Givat Shmuel in the east with Tel Aviv city centre in the west. The line will have 45 stations, including two interchanges with the Green Line and one with the Red Line, and is forecast to carry 60 million passengers a year. A fleet of around 100 LRVs will be required to operate the line.

In contrast with the $US 3.5bn Red Line, which is entirely government funded, the Green and Purple lines are set to employ a public-private partnership funding under a design-build-finance-maintain procurement structure.

NTA will be responsible for major civil engineering works including tunnels and bridges, utilities diversions and urban development work. The PPP contracts will encompass all electrical and mechanical systems, including track, electrification, signalling, rolling stock, and depots.

Israeli company Dana Engineers was appointed to manage design, construction and maintenance of the Green Line, while another local company, Spivak Engineers, was selected for a similar contract for the Purple Line. NTA is currently tendering for construction of twin bore tunnels for the Green Line and prequalifying bidders for later tenders. Tendering for PPP partners for the project will open later this year.

With momentum for these projects building, Israel’s Ministry of Transport and NTA upped the ante in December, announcing plans for a three-line metro network for Tel Aviv. This Shekels 100-150bn ($US 26.5-39.7bn) project will deliver over 130km of underground lines and more than 100 stations.

The second 25km east-west line will serve the cities of Rosh Ha’ayin, Petah Tikva, Ramat Gan, Givatayim and Tel Aviv, as well as future development areas including the Sirkin area.

In total, the metro is expected to serve 1.5 million passengers per day and 450 million per year. Trains will operate at 3-4-minute headways.
NTA says it is currently focusing on finalising the preliminary design of the metro project and hopes to complete statutory design within two years. A firm decision on how to proceed with the metro at the government level is expected after national elections in April.

Such ambitious plans for mass transit reflect a desire to develop infrastructure to serve Tel Aviv’s expanding population. The appearance of high-rise buildings across the city emphasises the situation with more than five million people expected to live in the Greater Tel Aviv area by 2040 compared with just over three million today.

After numerous false starts, the Red Line still seemed like a pipe dream for many city residents just a few years ago. However, this has changed. Burchell, who began working in Israel in 2014, says that when he passes through immigration and is asked what he does for a living, the response from the agent has changed from “that will never happen” to “when is it going to open? Why can’t it be earlier?”

Fortunately, they now only have 20 months to wait.