TGV Lyria: bringing frequent fliers back down to earth

Providing a comfortable service on high-speed trains as an alternative to air travel is the formula offered by TGV Lyria, which operates high-speed services between Switzerland’s main cities and Paris. Anitra Green talks to TGV Lyria’s director general Fabien Soulet, about the strategy. 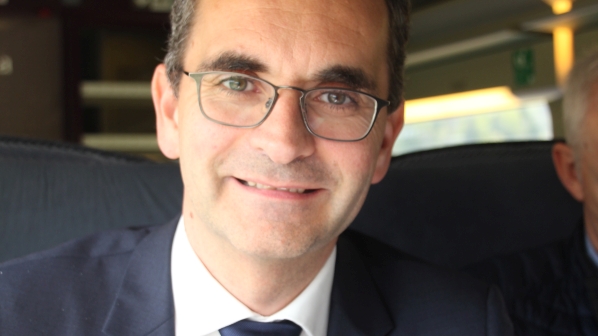 TGV Lyria was originally set up by French National Railways (SNCF) and Swiss Federal Railways (SBB) as an economic interest group 35 years ago to provide high-speed services between Paris and Lausanne/Berne. It soon became popular with French visitors to Swiss ski resorts. The network has gradually expanded and now operates on four routes radiating from Paris to Geneva, Lausanne, and Zürich and Bern via Basle.

Today, TGV Lyria is owned 74% by SNCF and 26% by SBB, and serves 21 destinations in the two countries with 19 return services every day. Journey times have been cut substantially over the last few years with the expansion of the TGV high-speed network and other infrastructure improvements in France. Last year the company recorded sales of SFr 333m ($US 333m) and carried 4.5 million passengers.

However, life has not been easy for TGV Lyria in the past few years. According to Mr Fabien Soulet, who took over as director general of the company towards the end of 2018, strikes in France last year resulted in a loss after a small profit in 2017. This was preceded by losses two years running. Soulet says he is now determined to get TGV Lyria back into the black.

“Our objective is to maximise growth for the sake of the climate,” Soulet says.

Soulet cites several reasons for TGV Lyria’s poor performance: an aging fleet, aggressive competition from airlines especially between Paris and Geneva/Zürich, and a lack of capacity. “Our objective is to maximise growth for the sake of the climate,” Soulet says. “It’s the only way to reduce the carbon footprint. To attract new customers, we need more comfortable trains, so we need to make a profit in order to invest in a new fleet.”

To get TGV Lyria back on track, Soulet has announced several major initiatives for the coming year. In a bid to ensure further development of the business on these routes and reinforce TGV Lyria’s position, he plans to increase comfort and offer Wi-Fi on-board. The current fleet of 21 trains, of which 19 are single-deck, will be replaced by 15 refurbished Euroduplex double-deck trains offering 507 seats per unit instead of the current 355 seats. All trains have two train managers on board, one German speaking and the other French, which has been the case since the outset.

Frequencies will also be improved and the timetable simplified. Services from Geneva to Paris will be increased to a regular eight departures every day of the week, instead of the current range of five to eight trains a day. “This is our most popular service,” said Soulet. There will be six trains a day - also every day of the week - between Lausanne and Paris instead of the current four or five, with three going via Vallorbe and three via Geneva. Zürich and Basle will see six departures a day each, seven days a week, instead of five or six to Basle and four or five services to Zürich.

One feature that has already proved to be a huge success is the addition of a third class in 2017 called Business Premier, in addition to the existing Standard Premier and Standard. Business Premier offers comfortable seats, a hot meal provided by a top-class chef, at-seat service, and free newspapers. TGV Lyria is trying to match airline business class, but without the hassle at either end of the journey. “Around 80,000 people chose to travel Business Premier in the first year,” Soulet reveals. “People are prepared to pay a little extra for this service. And it’s far more comfortable than travelling by air.”

Asked about the plan for a Geneva - Marne la Vallee (Disneyland Paris) - Lille service, Soulet says trials on the route demonstrated that ridership levels would not be sufficient for a viable service. It was a similar story with the Geneva - Montpellier service, he adds. Only the Geneva - Marseille TGV service continues to operate.

"This cooperative effort between France and Switzerland (a non-EU country, it should be noted) could well act as a role model for other European countries"

Another challenge facing TGV Lyria is on-time performance. “Punctuality is a battle every day,” Soulet explains. “We use Paris Gare de Lyon, which has the highest TGV traffic in France. Our services then have to travel over the busy Paris - Lyon high-speed line. Then there are the single-track stretches totalling about 165km, between Dole and Vallorbe on the route to Lausanne and between Bellegarde and Bourg-en-Bresse on the line to Geneva.” This explains the 85% punctuality rate which TGV Lyria achieved in 2018, with punctuality defined as within 15 minutes of scheduled arrival.

This cooperative effort between France and Switzerland (a non-EU country, it should be noted) could well act as a role model for other European countries if they have any ambition to do their part in tackling climate change by curtailing air travel over the relatively short distances on this continent. The technology is there, and TGV Lyria is proving that the comfort and convenience factors can be provided as well, at competitive fares.