Apps and Artificial Intelligence could be the answer to creating better public transport within cities and reducing the dependence on cars. Richard Clinnick reports on plans under development in Karlsruhe, which is no stranger to public transport innovation. 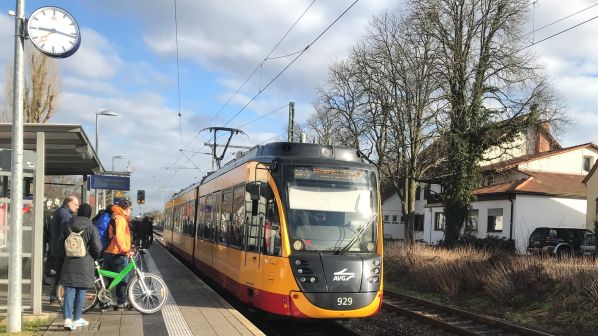 Sharing could be the key to a transport revolution, although this time based around sharing digital information rather than tracks.

KARLSRUHE, in southwest Germany, not far from the French border, has been at the forefront of innovation in public transport before, and could be about to repeat the trick.

Sharing infrastructure was the key to the Karlsruhe Model for tram-train operation, which has been successfully exported around the world. Now, 30 years later, sharing could again be the key to a transport revolution, although this time it is based around sharing digital information rather than tracks.

The ambition is for passengers to use apps to plan and carry out their journeys while operators will use digital solutions to improve performance of the public transport network and better understand passenger requirements.

At an IT-Trans webinar, “The Digital Hub Karlsruhe - Leading innovation in mobility,” Professor Dr Anke Karmann-Woessner, head of the city of Karlsruhe planning department, says the city has a strong foundation of future-oriented technologies and a range of excellent academic and research institutions, which have been working on progressive digital innovation, new technical developments and studying changes in traveller behaviour. She says that transport must also react to climate change. Specifically in the Rhine region of Germany there is a need to protect the landscape.

“It is essential to understand the link between urban planning and mobility development,” Karmann-Woessner says. Connecting environmental quality and mobility will be key to achieving the agreed targets for climate change and noise pollution mitigation.Karmann-Woessner says this can be achieved by improving integration between various transport modes. However, she says the major challenge remains in meeting the demand for individual mobility and convincing people to leave the car at home.

Mobility must be considered a technical as well as a social issue, Karmann-Woessner says, and must focus on people’s requirements. A sustainable mobility plan covering light rail, buses and active transport illustrates the city’s objectives for developing and implementing such a strategy over the next 10 to 15 years. She suggests this can be achieved through simple measures to improve connectivity such as linking light rail stops to footpaths and cycle lanes, and designing transport hubs to improve interchanges between modes. Areas which are easily accessible from main stations are particularly well situated for further development, she says.

Other ideas under consideration include the development of the city inside the existing settlement area. The city wishes to reduce car usage and increase public transport use, but passenger behaviour needs to change. “Everyone should be able to access everyday facilities, ideally on foot or by bike, within a distance of five minutes from public transport,” Karmann-Woessner says.

Dr Frank Pagel, manager multimodal transport at the Karlsruhe Transport Association, says that one way of reducing car dependency is to make the public transport system more attractive via an app that supports use of various modes of transport, including car-sharing and public transport in Karlsruhe and across the region. The app would enable people to plan their journey, while also allowing the various regions to promote new services and multimodal options. There are plans to incorporate tourism agencies, shopping centres and other companies into the app’s services, which is hoped will lure more people out of their cars “People want to go to events, the cinema or museums and that offers the chance for public transport to win new passengers,” Pagel says. “The really big challenge in creating this mobility is to change behaviour.”

However, integrating more services, more data sources and more platforms makes the whole management of a mobility system increasingly complex. This requires a technological solution and is also an opportunity to improve the efficiency of the entire network.

Mr Dominic Ziegler, software developer from Init, discussed Project Karl, an artificial intelligence system designed to support public transport dispatchers. He highlighted how accidents, traffic congestion and other disturbances are common events and that passengers now expect these to be dealt with quickly in order to minimise delays.

Ziegler says this is where AI can help. Research has been carried out at the University of Karlsruhe around the issue of incident management and how systems are continuously monitored. Intermodal transport control systems (ITCs) are employed to enable controllers to see where tram-trains are and to enable contact with drivers, but also to help staff plan diversions or changes to the timetable to get the service back to normal operation as soon as possible.

Ziegler says that an AI-based system could not only help the process but also support inexperienced staff to make better and more informed decisions. It will also reduce stress by allowing staff members to concentrate on other tasks involved in the context of the incident.

The AI harnesses historical data gathered from the ITCs, pinpointing known weak points in the network as well as past schedule adherence and historic operational decisions. Ziegler says the ambition is to learn from these, using the Karlsruhe light rail system as the case study.

The Karl project began last year and is still in the design phase. The next stage is to interview staff from the Karlsruhe control centre. They will be encouraged to share their expertise in the dispatching process including how they make decisions, and the relevant factors behind those decisions. From previous discussions Ziegler says that there is already an understanding that decisions are often made based on previous experiences. For example, diversions are regularly introduced when there is no explicit information available about the situation, which is why dispatcher experience is crucial.

People want to go to events, the cinema or museums and that offers the chance for public transport to win new passengers. The really big challenge in creating this mobility is to change behaviour.

There is also a need to understand the staff’s views on introducing AI, including any concerns and any possible limitations they see with the system. Parallel to these interviews, data is being prepared and analysed to understand what AI methods may be suitable with the aim of creating a prototype.

Mr Tim Wörle, from the Institute for Transport Studies at the Karlsruhe Institute of Technology, discussed the need to integrate all modes of travel. He says the creation of a travel demand model is essential when planning mobility hubs. This involves understanding people’s motivation for certain journeys. The process has shown that public transport is rarely used in isolation, but as one element of a wider trip.

“Even if that journey is on foot, it still defines how accessible public transport is, and that has an influence on transport quality in general,” Wörle says.

Passengers are already making more informed decisions based on their needs. Bike sharing is becoming more common, for example, which highlights the rise in popularity of using more than one mode of transport. Wörle suggests that this must be considered in any mobility plans and that travel behaviour needs to be continually studied and better understood.

Affordability, ease of access and straightforward journey planning are key to changing travel patterns. However, Wörle says there needs to be trust in the new systems that they are more reliable than what is currently available. There is also recognition that people perhaps are still unaware of all the options available to them when it comes to public transport and that people remain creatures of habit. This is another major challenge that must be overcome to achieve modal shift targets.

The longer-term ambition for the city of Karlsruhe is to create a situation where public transport services are so easily accessible that car ownership will not be required. That is quite a way in the distance, but by better understanding the travel needs of residents and acting accordingly, it is a possibility. Karlsruhe has created a successful model in the past, the work now underway could help it do so again.