The sound of the future

Unintelligible station announcements are a bugbear of passengers everywhere, especially when travelling on an unfamiliar network or when delays occur. Holoplot CEO Roman Sick explains to David Burroughs how a newly-developed speaker system could make these problems a thing of the past. 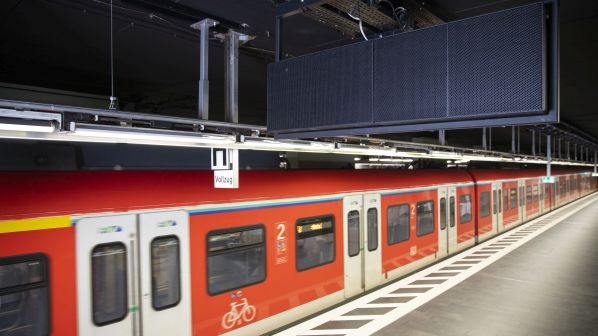 IT was a chance meeting at a conference that led Holoplot to work with German Rail (DB), and three years on, the Berlin-based company is close to releasing a product it says is a paradigm shift for station announcements.

Using multiple speakers, Holoplot is able to control sound in the same manner as directing a beam of light, allowing certain announcements to target different areas on a platform without spilling onto other platforms or becoming mixed with other announcements.

The system wasn’t initially developed specifically for rail but derives from 3D spatial audio technology, which has been under development for several decades.

“The basis is that the way we experience audio today, the stereo set up with the classic left and right speaker that you have at concerts or in many applications, is not at all how we listen to or experience audio in reality,” explains Holoplot CEO, Mr Roman Sick.

“Our goal was to build a technology that replicates the same original wavefront that is produced in reality.”

“We have a single mono source - a person talking, a piano being played, a helicopter flying - it’s all mono sources that create the sound of an object.

“Our goal was to build a technology that replicates the same original wavefront that is produced in reality. One kind of theoretical model is called wave field synthesis, which has been around for nearly 20 years in research, and which a couple of institutes have built on.”

While the technology was already developed to some degree, it was not practical for use in a real world application because of the need to install multiple small speakers 360° around the listener to create the effect. Instead, Holoplot set out to develop its own system that was able to create any wavefront using speakers installed in a single cabinet.

Holoplot began developing the hardware, software and algorithms in 2011, growing to a small team in 2013 before accelerating development in 2017 and taking the first product series Orion to market in 2018. The unique loudspeaker design with a multitude of small transducers inside enables a new level of control over the sound propagation.

“Any conventional loudspeaker, or any object, creates a sound wave that is uncontrolled,” Sick explains. “It’s like a stone that you throw into water, it creates a spherical wave that goes in all directions. You cannot control how it travels. The wave gets bigger as it goes outwards, so the energy has to distribute across a larger surface. This is the reason why the volume decreases the further one moves away from any loudspeaker today. Doubling the distance, we lose half of the volume. That’s just a physical principle of the traditional loudspeaker.

The resulting system can create various sound waves, including focus or concave wave fronts, which allow the concentration of energy at a certain point.

“So, instead of having one or two transducers in the loudspeaker cabinet, we have a large number of them in our audio module, and through our algorithms we can control each of them individually with very high precision. So in the end, we are not throwing one stone in the water, we are throwing a hundred stones in the water. If you do this, all of these small waves will form a new big wave, and you can control the shape and direction of the big wave by deciding which stone you throw at which time.”

The resulting system can create various sound waves, including focus or concave wave fronts, which allow the concentration of energy at a certain point. This not only has the advantage of creating precisely defined sound fields, but gives the listener a feeling of proximity to the sound source. The system also creates planar waves which allow a constant volume over distance, control of sound wave propagation and the creation of a confined sound field.

The integration of these sound waves allows for better control of audio and provides a better experience for passengers by improving the speech intelligibility of station announcements. The system also reduces noise pollution, as the targeted sound waves are less likely to be heard on other platforms or in different areas of the station, and results in a reduction in the amount of noise reflected from other surfaces such as floors or ceilings, contributing to an improvement in speech intelligibility.

The system is flexible and can be changed in real-time, Sick says, allowing station managers to update and change the announcements as and when needed through the software interface.

The software is capable of configuring and isolating multiple sound beams from each other, allowing each sound beam to have its own content routed through it. This makes it easy for operators to test different guidance scenarios or make adjustments to optimise uniformity of coverage and speech intelligibility.

While Holoplot was not initially targeting rail, the fortuitous meeting with DB at the TOA Tech Open Air Festival in 2017 led to the company taking part in the DB Mindbox accelerator.

“They had a booth next to us, and they came over and said ‘hey that’s pretty interesting for DB’,” Sick says. “We didn’t approach DB as an outsider because that’s a pretty long project lifecycle but they gave us the opportunity to pitch at their demo day to various company stakeholders. We did so, and it was a great success.”

Over the three to four months of the programme, Holoplot was invited to work with various stakeholders within DB to develop and test its products in a rail environment. The company also had direct access to DB’s managers on the ground who were interested in the product and able to directly approve the tests.

“That was an incredible result and a good kick-start into that relationship,”

During that time, Holoplot and DB launched a test at Frankfurt main station, which Sick says is acoustically one of the worst stations in Germany. Regulations call for stations announcements to have a speech transmission index (STI) of 0.5 on a scale from 0 to 1, which is usually achieved by installing speakers every 20m. However, during the tests Holoplot showed how its system could provide an STI of 0.75 over 200m using one set of audio modules.

“That was an incredible result and a good kick-start into that relationship,” Sick says, which also resulted in Holoplot winning the DB supplier innovation award in 2018.

Following the positive results above ground, DB and Holoplot launched a test on platforms 103 and 104 of the S-Bahn station underneath the main station in January.

“Instead of having a very open space, they wanted somewhere with a very low ceiling and a lot of clutter on the platform, such as escalators and vending machines, to show how you can achieve very good speech intelligibility on such a complicated platform,” Sick says.

The pilot was due to be completed on June 1, but DB has since extended this until at least next year when Holoplot plans to replace the system with a commercially available product.

“The products we have already are mainly targeted at other areas and other segments so they’re not optimised for this application,” Sick says. “DB wants to keep the system until the new product is available. It’s going to be mid-2020 but we’re not giving a date on it at this stage.”

There are also other potential benefits from the technology, such as a reduction in the amount of acoustic absorption material often used around stations which can be costly to install and maintain.

While its entry into the rail market received a positive and helpful boost from its involvement in the DB Mindbox programme, Sick says the rail industry is still comparatively difficult for start-ups to get a foothold in due to the longer product cycle.

“It’s a unique market and it has certain requirements that are not very transparent from an outsider’s perspective,” Sick says. “You really need inside knowledge to understand how this works, what do they expect from this product, how it is implemented, who the stakeholders are, and who makes the decision in the end.”

Sick says there is interest in the market for new technology and a willingness to test innovations, with a number of rail companies asking to trial Holoplot’s system. However, the process still takes time while conversely, start-ups are usually looking to get into a market quickly to prove their product and become established.

For Holoplot, time will tell whether its technology can become established as the new standard for platform speaker systems.