The timetable balance: long-distance vs regional, incumbents vs newcomers

Martin Smoliner, with the Austrian province of Styria’s Department of Transport and Structures, explains how introducing a network of standardised train paths in conjunction with a regular-interval timetable on medium-sized railway networks would improve the efficiency of allocating long-distance passenger train paths without comprising connections with regional services. 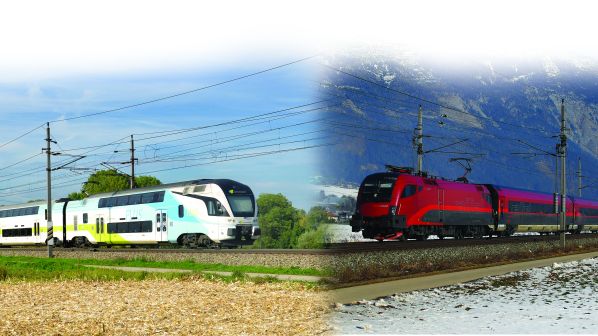 The resolution to Westbahn and ÖBB applying for a well-connected train path for the same long-distance connection on Austria’s Vienna - Salzburg main line resulted in a better long-distance service, but fewer connections to regional trains. Photos: Marco Stellini

AN integrated regular-interval timetable (IRIT) is a systematic timetable for the joint development of infrastructure and timetables and is perfectly suited to the needs of medium-sized countries which have many small cities relatively close together and lack the potential for high-speed trains. However, its implementation impacts timetabling and long-term infrastructure development and often requires costly infrastructure upgrades.

With the liberalisation of railway markets, non-discriminatory path allocation for passenger trains is becoming increasingly challenging as new players enter the market. Although legislation supports the implementation of the IRIT in such countries, train path allocation processes can potentially worsen overall network performance due to vague implementation rules. An IRIT is based on a network of hubs connected by train paths with standardised running times so that trains arrive at the hubs at the same time to maximise connections, as proposed in Austria in 2040 (Figure 1).

The hub at Amstetten on Austria’s Vienna - Salzburg main line is a good example of the problems that can arise. Two competing operators - Austrian Federal Railways (ÖBB) and Westbahn - applied for a well-connected train path for the same long-distance connection. However, the resolution of the conflict led to a reduction in the number of possible connections with other trains at Amstetten, thereby reducing network-wide benefits for passengers. In addition, reduced running times for regional trains lead to cancelled train stops or bus replacement services. While competition increases the frequency of long-distance services, this can be to the detriment of regional services.

An IRIT is a systematic timetable concept which requires a soundly designed network service. It combines advantages such as attractive network-wide journey times, high connectivity, and clearly pre-defined infrastructure requirements such as the number of tracks at a hub or the maximum speed on a line to achieve standardised running times between hubs. But, if passengers cannot benefit from the advantages of an IRIT, costly infrastructure investments must be questioned.

A detailed evaluation of rail infrastructure investment in Austria shows that more than 30% of the overall sum is spent on IRIT-related projects. However, it is unsustainable to design infrastructure based on the demand for short-term open-access services only. But, as new players enter the market, a non-discriminatory path allocation for passenger trains in the framework of an IRIT is becoming increasingly challenging.

By identifying a schedule of pre-arranged network train paths that are competitively tendered, it is possible to combine the advantages of competition and an IRIT.

A detailed analysis of the technical feasibility of developing a systematic timetable and train path allocation according to the current EU-legislation was carried out. Case studies in Austria, Britain, the Czech Republic, the Netherlands and Switzerland show the current situation of railway networks aligned to the IRIT and/or competitive markets (Table 1). To foster competition, it is essential to be transparent as to which train paths are available. Network train paths reduce this barrier to entry significantly, as they are planned on a long-term basis. Train path packages covering the entire long-distance network guarantee a sustainable coordination of the timetable and infrastructure development.

The IRIT is based on a strict schedule that consists of clearly defined hubs, which are connected by lines with standardised running times. The IRIT-scheme offers optimal network-wide connections for passengers and reduces journey times. But an IRIT can only work if network-wide standardised train paths are offered instead of individual train paths for open-access operators.

Standardised train paths in the shape of a parallelogram (Figure 2) fit the requirements of an IRIT. Arrival times at hubs are clearly defined to guarantee optimal connections with all trains. The shape of the parallelogram between the hubs does not precisely define a train and therefore allows train operators to adapt the timetable regarding stopping pattern, energy saving or timetable stability. After designing network train paths using FBS timetabling software on several sections of the Austrian railway network, a shape as depicted in Figure 2 can be produced.

To understand more about tendering schemes and IRIT, several countries which have an IRIT or intensive competition have been analysed in terms of:

As Table 1 shows, the Netherlands and Switzerland have network-wide concessions for long-distance services while Austria, the Czech Republic and Britain (partly) tender services under a public service obligation (PSO) or franchise scheme. In Austria, contracts for the operation of non-profitable lines are awarded directly. The lines are aligned to the requirements of the IRIT and consider direct connections as well as homogenous passenger demand and train composition as well as train operation.

In Britain, prior to the coronavirus pandemic, franchises have been competitively tendered since the liberalisation process started in the 1990s. The services packaged together for each franchise were primarily designed according to the former structure of British Rail and geographic areas and were latterly aimed at limiting the number of operators in major termini.

In the Czech Republic a redesigned process for awarding long-distance packages started in 2017 by introducing market consultations and direct awards. Package design characteristics include optimisation of train operation considering the requirements of an IRIT, type of traction and train turnaround times. The size of the resulting packages was about 2-6 million train-km with line lengths of 70-430km.

Beside line planning, which should consider IRIT boundary conditions, passenger flow, direct connections and train operation, the size of packages is an essential factor in terms of railway operation and competitive tendering. Small package sizes contradict economies of scale; however, financial risks can be reduced which may encourage new market entrants. Economies of scale experts suggest a minimum size of 2 million train-km.

An evaluation of competitive tenders in the EU shows that 80% of the tenders are less than 8 million train-km. Therefore, a range of 2-10 million train-km is assumed. As the complexity of a package is not mainly connected to its size, the type of services and vehicles should be as homogenous as possible.

Legal feasibility is crucial for the implementation of competitively tendered network train path packages. Infrastructure managers are obliged by Directive 2012/34/EU to allocate capacity in a transparent and non-discriminatory way, while guaranteeing efficient use of infrastructure. Regulation 913/2010/EU defines pre-arranged train paths for international passenger or freight trains, which is why network train paths can be applied in national passenger or freight services as well. To guarantee that network train paths are given preference in the annual train path allocation process, the priority for IRIT services needs to be implemented in official transport policy documents. As direct awarding of contracts is only possible under specified exceptional circumstances up to 2023, competitive tendering is a suitable tool to award network train path packages and to foster competition at the same time. PSO tendering has several advantages over other procedures such as concessions, franchises or auctions. Network train path packages tendered as PSO contracts:

Standardised train path packages tendered as PSO services fulfil the criteria of joint long-term development of timetable and infrastructure best and allow for the highest network-wide connectivity as well as customer benefits. The prerequisite, however, is that PSO services are given preference over self-sustaining services in train path allocation. Packages tendered in manageable sizes will allow new operators to enter the market. Niche segments such as accelerated point-to-point services, connections via routes or stations that are not yet served by long-distance services, or low-cost segments will be open for self-sustaining open access services. Network train path packages should be designed in an eight-step procedure covering parameters of transport planning, demand and railway operation (Figure 3).

A systematic and sustainable methodology based on an integrated regular-interval timetable and open access services can be implemented in accordance with the relevant EU-legislation. This non-discriminatory approach enables long-term strategic infrastructure development and effective utilisation of costly IRIT infrastructure. PSO-tendering of network train path packages will allow new market entrants to gain attractive market shares, while niche segments will be available for open access services. Finally, systematic timetables with clear structures and good connections produce the highest possible customer benefit.