The $US 8bn transformation of Iran’s rail network

The Iranian railway network is undergoing a major transformation through a series of schemes including construction of new lines and electrification. Richard Clinnick reports on almost $US 8bn worth of work. 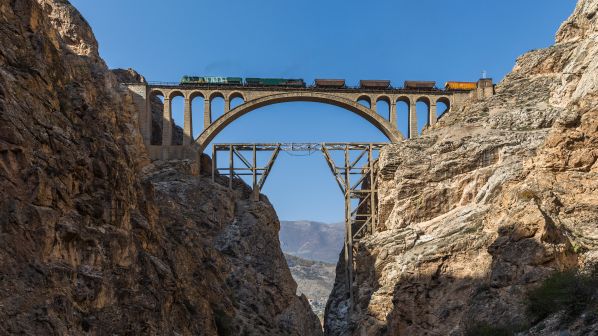 Iran is looking to improve rail connections with its immediate neighbours, Europe and East Asia.

IRAN’s place in the global rail sector cannot be underestimated. The country is home to 85 million people and its recently-elected 13th government is continuing with plans to invest heavily in transport systems with a particular focus on rail.

This is not just focussed on the domestic network but also aims to improve connectivity with neighbouring countries and provide a transit route for long-distance freight trains running between China and Europe.

Within Iran itself there are currently 28 projects underway including the construction of branch lines that total around 500km, all of which should be complete by the end of 2026. On top of these, there are a further 16 route improvement schemes totalling 520km in progress including work such as repairs and smaller construction schemes.

“It should be noted that the total cost for construction and completion of these projects is estimated to be around $US 7.915bn, part of which has already been provided,” says Ms Mozhgan Kordbacheh, deputy director general of international affairs at Iranian Islamic Republic Railways (RAI). The rest of the funding required will be accumulated by attracting investors.

The overall aim of this ambitious programme, designed by RAI, is to increase the share of rail transport in both the freight and passenger sectors by 20% within the next five years.

“Using international routes to connect Uzbekistan and Kyrgyzstan and finally China is envisaged after the re-establishment of stability in Afghanistan.”

Improving rail connections with its immediate neighbours as well as countries in Europe and East Asia is seen as a pressing need in Iran. RAI’s priority remains to extend the network to its borders. However, it is fully aware that connecting to other countries may not be easy; the infrastructure within Iran is often more advanced than that of its neighbours. A perfect example of this is the planned connection with Afghanistan. So far, 63km of new line has been built in Iran along with three stations, however the rail connection is currently out of use due to the recent political upheaval in its eastern neighbour.

There was some progress prior to this. On December 10 2020, RAI operated a train with seven wagons of cement from Shamtigh, on the Iranian border, to Rahzanak in Afghanistan. A second train, also carrying cement, formed of 11 wagons followed, operating on the opening day of the first 140km section of the 225km Khaf - Herat line as far as Rahzanak. RAI had also been involved in the training of Afghan railway personnel in a now-completed programme in partnership with Afghanistan Railways.

The Iranian government still has ambitions to develop the rail connection with its neighbour. Kordbacheh explains that this has more far-reaching benefits than just linking the two countries. She says that according to RAI’s master plans, construction of the 80km joint railway to Herat, which will be built in two 40km sections, will continue.

“The first was to be completed within nine months of the opening of the Rahzanak route, and the measures for construction of the second section were to begin the following month. However, using international routes to connect Uzbekistan and Kyrgyzstan and finally China is envisaged after the re-establishment of stability in Afghanistan,” she tells IRJ.

One of the key priorities for RAI is completion of the 164km final section of the Rasht - Astra line. This will connect the Iranian rail network to Azerbaijan. A new 40km branch is also under construction from Rasht to Anzali on the Caspian Sea, with the aim of completing work within months.

“Of course, the construction of the Chabahar - Zahedan railway with a length of 635km is very important,” Kordbacheh says, stating that work began last year and already the physical progress regarding infrastructure is around 63% complete, while the entire project has reached 47% completion. This line will create a rail link to the Indian Ocean port of Chabahar.

Decarbonisation is not just about what can be done in Europe and the Americas – the rest of the world is taking this critical issue just as seriously.

In Iran, there is a major focus on electrification with several projects underway.

Electrification and route enhancement including increased line speeds on the 926km Tehran - Mashhad line is in progress. This is one of the busiest lines in the country, running to the northeast from the capital. There are 50 stations, and the line serves major cities including Garmsar, Semnan, Damghan, Shahroud and Neyshabur. The current maximum line speed is 160km/h, but there are plans to increase this to 200km/h once electrified. Projections suggest that by 2032 the line will carry 33 million passengers annually as well as 10 million tonnes of freight.

The project is being completed in two phases, with the first comprising the design, procurement and installation of overhead lines for the entire 926km double-track line, as well as the four-track section between Tehran and Garmsar. In addition, 70 electric locomotives will be procured.

The second phase focusses largely on civil works, including upgrading and renewing sections of the existing network to enable the planned increase in line speeds. Stations will either be rebuilt or redeveloped while more passenger rolling stock and maintenance machinery will be procured.

A €1.2bn contract has been signed with Russian Railways (RZD) to finance electrification of the 430km Garmsar - Incheh Borun line.

In addition, a Memorandum of Understanding was signed as recently as July for the electrification of the 114km Tehran - Garmsar suburban lines. This will also enable an increase in line speeds from 120km/h to 160km/h on the two lines.
Construction of the 410km Tehran - Qom - Isfahan high-speed line by the China Railway Engineering Corporation is underway. First proposed in the 1990s, the line will have a 300km/h maximum speed.

RAI is also seeking investor finance for the planned electrification of the Sarakhs - Bandar Abbas line. Traction-wise, Kordbacheh points out that 150 electric locomotives built by Siemens to the same specifications as European units were delivered as part of Iran’s 10-year railway plan in the 2000s.

But it’s Iran’s location between China and Europe which is so important for the railway’s ability to not only grow, but to attract the finance needed to expand and meet its international ambitions. Kordbacheh believes the route to Europe via Iran will “undoubtedly be shorter, more economical, and due to the fact that no trans-shipment is needed, really fast compared with the branch of new Silk Road crossing the Caspian Sea. Furthermore, freezing cold winters on the northern route crossing Siberia makes this route difficult to cross and increases the freight costs in this region. The route crossing Iran has four seasons, and it is free from these problems.”

A report published by Roland Berger Consulting in 2021 states that Iran is among the routes that the Chinese consider the most suitable for connecting to Europe. But Kordbacheh suggests that the ongoing situation in Afghanistan must be determined before there is progress. This is because the Chinese intend to link its southern rail link to Turkey via Pakistan and Iran should an agreement be reached.

“In this regard, the Islamic Republic of Iran intends to act as a bridge linking Europe and Asia together,” she says.

“Furthermore, RAI attempts to enhance interactions and cooperation with all the related entities in the field of trade, apply strategies for the post-Covid-19 period and by holding a strategic vision in boosting trade to provide the required capacities in the framework of a national measure for activating international corridors crossing the Islamic Republic of Iran.”

Like the rest of the world, Iran suffered during the pandemic. Borders closed, which halted international travel for four months as well as the country’s ability to trade.

However, Kordbacheh says the country’s railway was able to continue operating. Disinfection tunnels were introduced for freight services at borders that enabled them to continue working and this has resulted in a noticeable increase in rail transport.

“Fortunately, the broad-gauge track at Incheh Borun border station has been linked to the Turkmenistan border station which makes increasing of the wagon exchange capacity and shunting with broad gauge locomotives possible for RAI,” she says.

Iran is on the brink of realising the value of investment in rail. While the current situation in Afghanistan may be slowing down its plans to play a significant role in providing faster links between China and Europe, expansion within its borders is continuing undeterred.