Tokyo is gearing up to host this summer’s Olympic and Paralympic Games. With millions of extra people set to visit the Japanese capital for the sporting extravaganza, Tokyo Metro and JR East reveal to Kevin Smith how they are preparing their respective rail networks to cope. 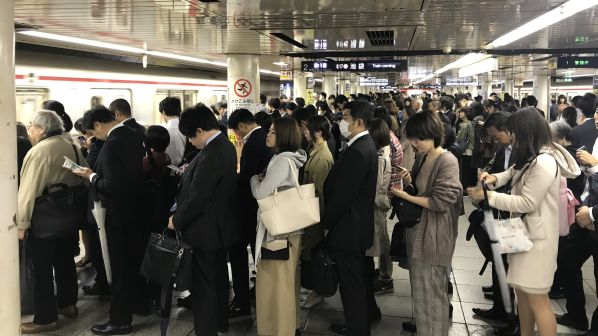 Tokyo’s urban rail network is notoriously busy at peak times. Operators are working on measures to ease congestion during this summer’s Olympics.

AWAY from lighting the flame and awarding medals for outstanding performance, some of the most important aspects of hosting successful Olympic and Paralympic Games is the safe and efficient transport of the thousands of spectators who will visit the host city each day. This summer’s games in Tokyo are no exception.

As the finishing touches are made to impressive new and renovated sporting venues across the city, attention is shifting to operational planning for the event.

During the city’s candidacy for the games, the bid file mentioned that an estimated 7.3 million people will visit the country for the Olympics and 2.8 million for the Paralympics. Inevitably this will place significant pressure on Tokyo’s public transport network, which is already heavily used - an estimated 40 million journeys take place in the capital using public transport every weekday.

To meet increased demand, operators including Tokyo Metro and JR East are set to lay on additional trains to enhance capacity, particularly around the start and end of major events. Operating times will be extended on some key lines. For example, the Yamanote Line, the central city loop which is operated by JR East, will extend services beyond 02.00 while other sections will offer an additional one hour of operation.

However, these strategies are not yet set in stone. Tokyo Metro says plans are amenable to new information on the number of expected spectators at specific events. Detailed operational plans are set to be announced closer to the start of the Olympics and when more information is available on the number of anticipated Paralympic spectators. JR East senior executive officer in charge of international affairs, Mr Hitoshi Saimyo, says the operator’s plans will be informed by close discussions with other transport operators as well as the Tokyo Metropolitan government, Olympic organising committee, and the police force.

By strategically positioning the automatic fare gates t­hat they must tap to participate, the metro hopes to better disperse the flow of passengers through stations and to and from venues.

These plans are set to include advice to regular users of the network to avoid using routes and stations at times of expected heavy congestion. However, this is not just left to chance. Tokyo Metro will use various media channels to provide information on which section, fare gates and stairs are particularly busy and encourage passengers to use less-congested routes. Olympic spectators will be provided with maps of the areas around venues to help them select the least congested route before and after the event.

Among the plans to support regular commuters is the offer of Metopo incentive points for using some lines and stations outside of peak times. By strategically positioning the automatic fare gates t­hat they must tap to participate, the metro hopes to better disperse the flow of passengers through stations and to and from venues.

Metopo points are exchangeable for electronic cash for use with the metro’s Pasmo smartcard. 10 points are worth Yen 10 ($US 0.09) and can be used to purchase transport tickets as well as for payments in convenience stores and restaurants. In addition, special ticketing schemes are on offer to Olympic visitors: the Pasmo Passport is a special transport smart card valid for 28 days while the Tokyo Supporters Pass, which is offered by 26 operators in the greater Tokyo area, will provide free journeys on all participating operator’s lines for three consecutive days.

Tokyo Metro says the emphasis of a series of infrastructure improvements that will continue up to the start of the games is on guaranteeing passenger safety when stations are busy.

For example, the metro is pushing ahead with its programme of installing platform screen doors at stations with plans in place to cover 143 of the 180 stations by the start of the games. Priority is given to stations close to Olympic venues such as Meiji-jingumae on the Chiyoda and Fukutoshin lines, which is adjacent to Yoyogi National Stadium, the host of the Olympic handball competitions and the Paralympic wheelchair rugby and badminton.

In addition, the metro will install temporary ticket barriers to help improve the flow through stations. It is also working hard to install barrier-free facilities such as multi-functional western style toilets at all stations and additional lifts. Tokyo Metro says 177 of the 180 stations will feature elevators by the start of the games. These include Gaiemmae station on the Ginza Line, which is located close to the Olympic stadium and its adjacent venues and will feature additional lifts to improve accessibility. New elevators at Shinjuku station platforms 7 and 8, used by JR East’s Chuo Line, will have capacity for 24 people, meaning multiple wheelchair users will be able to use the lift at the same time.

The Ginza Line, which opened more than 90 years ago, is undergoing a major refurbishment. The sub-surface line has been divided into five distinct areas: old downtown, commercial, Ginza, business, and trendy, with station improvements in each intended to reflect the characteristics of the area of the city above. For example, two of the network’s oldest stations at Ueno and Asakusa in old downtown were redesigned so that passengers could feel the tradition and atmosphere of a bygone era. However, the stations will still benefit from modern upgrades, including platform screen doors and elevators to improve safety and comfort.

Likewise, the line’s 40 six-car series 1000 trains, which entered service between 2011 and 2016, are designed to evoke the original 1927 1000 series trains but again include modern features such as permanent magnet synchronous motors developed by Toshiba, which offer a 20% energy saving compared with conventional VVVF inverter controlled motors.

Passengers using the Ginza Line will also be able to transfer at Tranomon to Tranomon Hills, a new station for the Hibiya Line, which will open this summer. The Hibiya Line opened in 1964, the last time Tokyo hosted the Olympics.

Increased resilience is also evident in measures to reduce the impact of natural disasters or a terrorist attack.

Work is also underway across the network to reduce the gap between trains and the platform to improve boarding for all passengers, but particularly wheelchair users. The focus is initially on stations close to sporting venues. Metro stations will similarly benefit from enhanced security during the games through the addition of new or upgraded security cameras. The new cameras can detect suspicious behaviour or potentially dangerous items. Onboard security camera coverage is similarly being improved.

Increased resilience is also evident in measures to reduce the impact of natural disasters or a terrorist attack. This includes installing water-tight entrances at some stations to prevent flooding in the event of heavy rain. Staff are undergoing emergency drill training. One important objective here is to shorten the time it takes to restore service and to help staff to assist customers safely, in a timely manner and in multiple languages.

Inevitably the major challenge of delivering these infrastructure improvements has been managing construction work alongside daily operation. The scale of work taking place was apparent during IRJ’s visit to Tokyo in November. Temporary partitions were installed at numerous stations across the network to allow work to continue without disruption while minimising the impact on passengers using the station. The four-hour night-time closure between 01.00 and 05.00 also provides valuable but limited opportunity to conduct improvement works.

Guests from more than 100 countries are expected to visit Tokyo during the Olympics and updates to passenger information systems are emphasising availability in a variety of languages.

Information at stations and onboard trains is already available in four languages - Japanese, English, Korean and Mandarin - and other media such as Tokyo Metro’s official website and the App for foreign visitors is available in three additional languages - Thai, French and Spanish. Audio announcements during the Olympics will also be provided in multiple languages as will visual displays near ticket gates. Staff will use tablets with a voice translation app to support passengers while megaphones used for audio announcements at busy stations will provide information on service status on all lines as well as in the event of emergency situations.

Passenger enquiries will also be supported by an extension of operating hours at Customer Information booths at Ueno, Ginza, Omote-sando, Shinjuku and Tokyo stations by four hours during the games from 09.00 to 17.00 at present to 08.00 to 20.00. Telephone helpline operating hours will similarly be extended by two hours from 09.00-20.00 currently to 09.00-22.00.

In addition, it also hoped that the provision of free Wi-Fi will help passengers with navigation and to find the information they need using their own devices. The service is already available at stations and will be made available onboard trains by the time of the Olympics.

As well as structural and process improvements, transport companies are encouraging their employees to embrace the games. Saimyo says as part of JR East’s preparations, staff are being offered opportunities to volunteer and participate in the promotional campaigns in the run-up to and during the games. “We want to support this wonderful event as much as possible,” he says.

Of course, Tokyo is not the first city to host the Olympics and transport officials are drawing on the experience of other recent hosts. In particular, London is widely regarded as having delivered the most effective transport strategy at a recent Olympic Games and Saimyo says JR East officials visited the city on countless occasions before, during and after the 2012 games to learn about how the city’s plans were developed and ultimately delivered. For example, Tokyo Metro says it learnt valuable lessons on using demand estimates for operational planning. However, Saimyo was cautious about simply replicating what has happened elsewhere.

“We can’t just imitate what London has done,” Saimyo says. “We have to evolve based on what we learnt from London.”

Last autumn’s rugby union World Cup provided Tokyo’s public transport operators with a litmus test for planning for a major event and accommodating sports fans from multiple countries. The Olympics is of course on another level and, as it is largely located in one city, will require a lot more work.

With the countdown now well and truly underway, planning is set to ramp up in the next few months to give Tokyo the best possible opportunity to deliver an effective and efficient transport service. Success is imperative. After all, without effective mobility, the games simply would not be able to function.