Tough market set to persist in 2020

A stagnant North America freight market is set to continue in 2020. However, as Jim Blaze explains, technological advances and potential growth in intermodal, heavy-haul offer the Class 1 railways room for optimism. 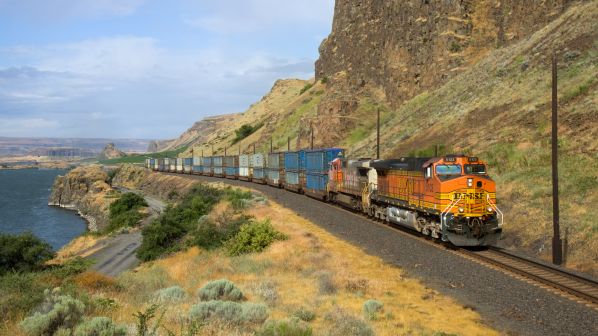 West Coast intermodal flows could contract due to new trade paths from Asia to the east coast. Photo: David Gubler

ECONOMIC demand forecasting in the United States freight logistics market is a complicated task even when trade patterns are dependable. Today it is very nearly impossible.

In the last 18 months, a trade fog has descended. Uncertainty is clouding probability of outcomes across ocean, land, and even air routes, making even the best laid plans for 2020 potentially outdated a few months into the year.

By late November, most US freight railways had surveyed their core customers to produce a first quarter 2020 traffic volume outlook. Railways had also produced annual capital expenditure and maintenance plans -
as well as a pricing strategy and an income statement for the year.

Senior executives on each railway will likely conclude that their 2019 outlooks were wrong.

Senior executives on each railway will likely conclude that their 2019 outlooks were wrong. Most of the big seven Class 1 railways had probably assumed 2-4% growth rates in sectors such as grain, chemicals and intermodal. That didn’t occur, as actual volumes were probably down around 7-9%.

The Cass Freight Index, which represents annual freight shipment and expenditure worth more than $US 28bn, also makes tough reading. The index experienced a prolonged decline throughout 2019, falling 3.4% in September, the 10th straight month of declines. The declines accelerated throughout the first half of the year, peaking in July (-5.9%) before slowing in August (-3%) and September.

As a result, many of the railways’ plans for 2020 are expected to be relatively conservative, suggesting perhaps 1-3% traffic growth over 2019 volumes.

Why so low? Is a recession on the horizon? Over the last 90 years, the US economy has averaged a recession every 6.5 years, so we might be overdue. While overall US economists seem split, there is general concern about what is to come in the next 18 to 24 months.

However, FreightWaves market expert, Mr Mike Baudendistel, points out that as 2019 ends, the year-on-year weekly declines in volumes are moderating - there are even some segments like grain where volumes are increasing slightly. Performance here might also be helped by the China-US trade agreement announced last month.

Union Pacific expects that 2020 volumes will be positive year-on-year while both Canadian Class 1s cite crude by rail and their investments in eastern Canada as supporting growth.

Indeed, petro-chemicals are set to continue to strengthen in 2020 even though final quarter chemical production was mixed. Overall, massive plant investment and construction continues in the Texas/Louisiana Gulf Coast region, reinforcing optimism.

The railways’ early forecast for 2020 suggests a year of modest recovery with improved but still comparatively low volumes with very few seeing a full-blown recession. Others are not so sure.

Mr Ron Sucik, an observer of the intermodal equipment market, foresees very little US intermodal growth well into 2020. This is partly due to retailers continuing to adjust their sourcing and further uncertainty over long-term consumer buying strength.

“Once a shipper has gone back to trucks, because of railway pricing or route cutting practices, they are very difficult to recapture.”

Ron Sucik, an observer of the intermodal equipment market

Sucik expects competition to continue for mid-distance distribution by truck. He also anticipates international sourcing to shift further west in Asia, resulting in traffic switching to use the Suez Canal to reach east coast ports. This will reduce cross-country rail intermodal movements compared with the past two decades when imported goods mainly entered via west coast ports.

Sucik says western long-haul intermodal railways may attempt to protect their train volumes and seize market share from trucks and the emerging global port diversions. However, this will be difficult. “Once a shipper has gone back to trucks, because of railway pricing or route cutting practices, they are very difficult to recapture,” he says. Flat intermodal wagon demand will translate into weak intermodal wagon orders in 2020.

The Class 1s have consistently argued that as they implement Precision Scheduled Railroading, service will improve, and they will gain traffic. However, while the industry’s key performance metrics, including average train speed and the amount of time wagons spend in yards, have improved considerably, they do not equate to the actual service a customer receives because they measure network health, not reliability of final delivery.

Only a big bang change, such as a new China-USA trade agreement which includes agricultural and tariff adjustments, will guarantee higher rail growth.

While rail executives insist these improvements will lead to recapturing market share from road, this is not yet the case. And while the outlook for rail freight in 2020 might not be clear until March, due to continuing economic uncertainty, there are few signs of significant growth ahead.

Only a big bang change, such as a new China-USA trade agreement which includes agricultural and tariff adjustments, will guarantee higher rail growth. A slight thaw in US-China relations in late 2019 indicated this might be close.

Looking ahead to the new decade, one big issue concerns the decline in coal shipments. More than 500 coal power stations closed between 2010 and 2019. Coal now accounts for less than a quarter of all electricity generated in the United States compared with 52% in 2000. There is no single replacement commodity currently on the horizon that will replace the coal market.

Rail is also threatened by the continuing growth of trucking. The long-projected driver shortage and the drug and electronic logging threats that would drive mainly intermodal freight from road to rail hasn’t happened. Instead, truck driver salaries are increasing and the logging devices are helping to improve driver utilisation by identifying shippers that delay drivers.

Conversely, rail has not yet developed a competitively viable short-haul North American intermodal or wagonload product. A few short-haul intermodal services, such as Florida East Coast’s Miami - Jacksonville service with extensions to Atlanta, show the potential. But they are exceptions, and this remains a missed opportunity since there are so many short distance urban market pairs east of the Mississippi.

Indeed, big long trains may now be out of sync with demand. Six of the seven Class 1 railways are cutting their production costs by operating mixed commodity trains.

Moreover, the high growth rate of double-stack container trains out of the west coast ports towards Chicago, Dallas-Fort Worth, Atlanta, and the eastern seaboard has slowed. In the past, intermodal was growing three to four times that of GDP.

Indeed, big long trains may now be out of sync with demand. Six of the seven Class 1 railways are cutting their production costs by operating mixed commodity trains that exceed 3km in length to maximise rail’s economic advantage of higher weights and longer distances. This contrasts with road hauliers which are increasingly moving high value commodities in smaller, lighter shipment sizes and much more frequently in a 24-hour period.

Information technology is also both an opportunity and a threat in the coming digital era. On the risk side, most railways haven’t worked out how to integrate their ageing data systems into modern shipping and supply chain digital tools, so the big railways need to catch up with their digital-capable rivals.

In 2018, Hunt started using masses of data points and machine learning technology to match loads with the correct trucks. By autumn 2019, the digital system was using over five billion sets of data points. The analytic results were so transparent that Hunt can claim it enabled the addition of over 600,000 trucks to its platform within two years, equivalent to $US 1bn in transactions.

Shippers widely complain that they are often required to use antiquated railway software and procedures, which are bulky and not fully transparent.

The Class 1s claim a similar revenue and traffic system is in development. But nothing like the Hunt 360 method has emerged so far. This delay is troubling. Shippers widely complain that they are often required to use antiquated railway software and procedures, which are bulky and not fully transparent.

In short, railways are a step behind technologically, but they could leap forward by buying in the digital skill and integration capability rather than trying to build it themselves. The first simple step might be to start using the Positive Train Control (PTC) GPS feeds from thousands of already-equipped locomotives to feed intelligence directly into customers’ digital logistics data centres and software.

But it is not all bad news. There is still potential to capture intermodal traffic from road. So much so that JB Hunt announced recently that it will target a percentage of the 11 million annual highway truck movements available for intermodal conversion.

Inevitably there are a few challenges. The first is to convert semi-trailers to more rail-efficient double-stack operation instead of trailers on rail flat cars. However, not all shippers want to make the shift.

Secondly, railways continue to assume that they have pricing power considerably above inflation and so do not sense the need to discount their claimed increasingly-superior service.

Market analysis suggests shippers still see intermodal rail as a discounted service relative to precision trucking, suggesting a market disconnect. Pricing and volumes across five to 12 US corridors during the first six months of 2020 should reveal who is correct.

As for the next three years, it will be interesting to see how intermodal growth and market share versus trucking plays out. Rail hasn’t performed very well in growing intermodal growth due to corporate cost cutting. In 2018-19 several cost-conscious railways walked away from 15% of intermodal traffic. That’s a dangerous strategy when you are often the customers’ second choice. Anaemic growth rates between 2015 and 2019 reflect this.

It is also time for the big seven Class 1s to re-energise their intermodal market view. With operating profits at around 40% and the return on the business assets at close to 14%, they can clearly afford the capex to strike out for more business.

The heavy-haul freight market continues to grow, but some of the corridors require loading gauge improvements at bridges, tunnels and on curves.

However, adaptation and a good slice of luck could still push railways forward.

Wind turbines are a big opportunity as is the movement of transformer and generator equipment for a proposed modernisation of the US power grid.

Random events will likely interrupt logical assumptions. Disruptive inventions and competitors could also lay waste to the best laid plan. However, adaptation and a good slice of luck could still push railways forward. But they are still likely to be chasing the trucks in 2030.