As infrastructure managers look to increase network availability while coping with shrinking maintenance windows, pressure is building to operate as efficiently as possible. David Burroughs visited Vossloh in Germany to find out how its advances in rail grinding and milling are mitigating this issue. 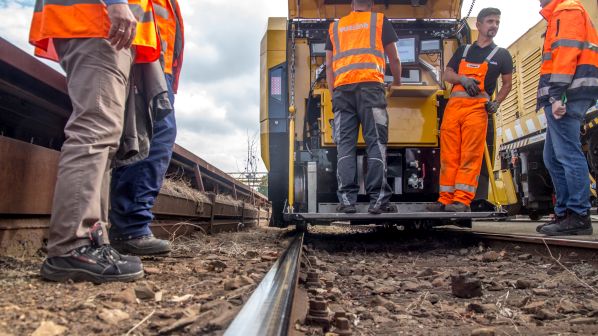 MAINTAINING and managing track is a costly and time-consuming exercise. At its 2019 Rail and Turnout Machining Symposium, held in Hamburg on September 24, Vossloh outlined the capabilities of its new technologies along with improvements to its existing tools, which it says will increase productivity and reduce the time needed to maintain tracks and turnouts.

High speed grinding (HSG) technology has been used for preventative maintenance across Europe and Asia for more than a decade, and Vossloh is now changing its approach. Instead of multiple runs throughout the year, Vossloh now recommends combining separate HSG deployments into a single annual cycle comprising eight or nine passes, with the aim of removing 0.3mm of material.

This operation is usually carried out at 80km/h, removing the need for track closures and causing minimal disruption, but Vossloh is also testing operating at speeds of 100km/h.

Vossloh says this strategy reduces not only the time required for network access, but also the planning involved for site set up and network occupancy, delivery, and the cost of traction services.

Tests have shown the quality of the grinding result to triple, while at the same time allowing infrastructure managers to better orient their maintenance requirements to the current rail condition. In addition, the choice of different grinding wheels allows a much more specific and flexible application that can be tailored with each pass, optimising the rail’s cross profile in the grinding zone of 50˚ on the gauge corner to 10˚ on the outside edge.

The strategy of performing multiple passes successively also results in a significant improvement in rail roughness. Several final passes with fine grinding wheels puts a smooth finish on the rails, achieving a roughness quality index of 4.

Vossloh’s HSG-2 is equipped with measuring technology to record the rail’s condition with each pass, creating a database that can subsequently be used to undertake smart track maintenance.

The autonomous sensors measure both rails at the same time, making it possible to determine if there is any widening of the track gauge.

Vossloh says there are several benefits associated with this: for the first time, collecting data on the condition of the rail is possible without track closures or timetable disruptions and at speeds of between 80 and 120km/h. Rail machining and actual state diagnostics are also combined in a single pass while machining data can be collected for the next grinding pass, creating a more accurate process.

At the beginning of the year, Vossloh installed and tested sensors that continuously measure the rail’s cross profile to ascertain which reprofiling measures are necessary.

The autonomous sensors measure both rails at the same time, making it possible to determine if there is any widening of the track gauge. Cross-profile measurement also makes it relatively easy to calculate the wear reserve in the rail head. Following the closed trial, Vossloh intends to make wear margin measurements available to customers in the near future.

By coupling two HSG-grinding units behind a locomotive, it is possible to reduce the grinding cycles required to as few as four passes, minimising disruption and traction costs while achieving a rail roughness of 3 to 4.

The cutting process, which machines the full rail profile and is accurate to within 0.1mm, removes significantly more material than grinding - usually up to 1.8mm on the running surface and up to 5mm on the gauge corner.

Vossloh’s High Performance Milling (HPM) machine can now remove between 0.3mm and 3mm on the running surface and up to 9mm on the gauge corner. The 1400mm-wide milling wheels reduce residual ripple, while the vertical face-milling units completely remove the ripple and milling chips at feed rates of up to 1.5km/h. The finishing method can achieve roughness quality indices of <1.0, without requiring subsequent grinding, and the procedure does not produce any sparks or dust.

Vossloh has developed a smaller Multi-Purpose Milling (MPM) machine especially for removing hot-spots, such as deeper rail defects located along short sections of track, and for corrective reprofiling of the entire rail head. The milling tool can be adjusted to the rail cant, allowing it to machine canted rails without changing the tool.

The milling trucks can also remove defects such as lip formation and gauge face wear from the rail’s gauge corner, which is the result of centrifugal forces generated when rail vehicles travel through curves. This can cause negative deformation of the rail.

Along with advances in the development of grinding and milling machines, Vossloh has also been working on programmes to support the overall management of rails and turnouts using a range of digital solutions.

Vossloh says that recent observations have shown that condition-based maintenance procedures are more effective than schedule-based maintenance at removing and preventing rail defects, and reducing rail noise. This means that data on rail condition has to be collected more often and better analysed to ensure that the right procedures are undertaken at the right time.

Asset management systems such as MR.pro or the mapl-e (maintenance planning easy) app allow this data to be automatically analysed and classified

Vossloh has developed a service portfolio, which combines “tracking, seeing and solving” to simplify track maintenance and decision making. The concept is based on intelligent rail reprofiling machines, which are equipped with an array of measuring equipment, to supply the necessary proof that the desired results have been achieved. The equipment also provides live data on the rail’s cross-profile quality and corrugations, and tests for cracks using eddy current technology.

Asset management systems such as MR.pro or the mapl-e (maintenance planning easy) app allow this data to be automatically analysed and classified according to the reference values set, simplifying planning and helping prioritise the procedures required while at the same time keeping track of costs. The software evaluates various maintenance options, calculates the machining times and costs, and transmits the data to the rail reprofiling machine.

The mapl-e app has been developed with the goal of simplifying and shortening the planning process for rail repair and maintenance. The programme has a database of all the accumulating measurement results so that asset managers are shown the latest updates on the condition of rail networks.

In order to provide a quick overview, this data is compared with the limit values and, based on these results, various repair and maintenance scenarios such as the deployment of the different machines can be simulated and displayed. These deployments are evaluated in terms of costs, time required and the necessity of track closures, and can be directly compared with each other. Data can also be transmitted to the reprofiling machines. Vossloh says the more historical data that accumulates in the system, the more reliable the trend analyses become, which continually improves the accuracy of forecasts on the future condition of the rails.

In order to further simplify data collection, Vossloh is equipping its reprofiling machines with sensors and measuring technologies that determine the longitudinal ripple and take exact measurements of the cross profile.

Vossloh is looking to replicate the service level agreement (SLA) approach applied elsewhere in the industry, such as with locomotives and fleets, and has begun offering its own flat-rate SLAs which provide the infrastructure manager with a guaranteed standard of quality for rail and turnouts at a fixed price.

As SLAs are common in France, Vossloh has created a joint service unit comprising employees from the Vossloh Rail Services and Vossloh Cogifer business units to respond to the growing demand for railway-related services there. These include specific maintenance work on turnout systems, spare parts management and condition-based, customised rail machining.