As the nature of work changes and the useful life-span of skills drops, training centres are grappling with the challenge of bringing through the next generation of workers to meet the needs of railways. David Burroughs reports from Morocco on how the industry is tackling these issues. 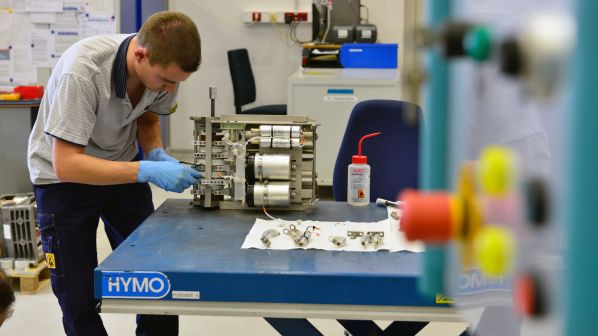 NOT too long ago, apprentices entering the railway industry could comfortably rely on skills learned on the job or at university as a base on which to develop as they worked their way up.

But as the rate of technological development has increased exponentially, the need for reskilling has also increased at an equally-rapid pace.

In the past, professional skills were said to have a life-span of between 10 and 15 years before becoming outdated and retraining was required. But this has since dropped to less than five years, resulting in a major requirement for companies to continuously retrain and upskill their workforce to keep up with advances.

Speaking at the 5th International Union of Railways (UIC) World Congress on Rail Training in Rabat, Morocco, in October, UIC and Italian Railways (FS) president, Mr Gianluigi Vittorio Castelli, told delegates that the shifting needs of the industry were changing the requirements for staff at all levels.

“My generation grew up with the strong idea that the multiple skills from university would be good for the rest of your professional life until you retired,” he says. “That is not true anymore.

We really need to enter into continual retraining of our skills, otherwise we will become obsolete.”

A major point of concern in the industry is the potential loss of jobs caused by automation and the introduction of artificial intelligence (AI), but Castelli said that there is an equal chance that people in 10 years will be doing numerous jobs that are unheard of today.

Podcast editors, Uber drivers and driverless car developers are just some jobs that were virtually unheard of 10 years ago, and estimates have found that up to 65% of children beginning primary school today will enter the workforce with jobs that don’t yet exist when they finish their vocational training in 15 to 20 years’ time, posing the challenge to industries of how to equip them with the skills they will need.

Trainers are increasingly looking at tasks and lessons to develop soft skills - those that are not task specific but are instead more often linked to personal attributes - and incorporating these into into the curriculum alongside lessons that develop hard skills.

Soft skills can include communication, listening, adaptability, creative and critical thinking, problem-solving, conflict resolution, work ethic, teamwork and decision making, and can often make it easier for staff to transition from one role to another. The challenge is that these skills are often harder to teach in a traditional classroom setting, and are also harder to measure and gauge using standard exam methods.

“For us it’s an opportunity to see what the difficulties for learners are, it allows them to acquire content in a more efficient way.”

One non-traditional method of training undergoing trials in an effort to grow these skills is the gamification of learning, where classes or lessons involve physical or digital games which have been designed to develop particular attributes.

This method is being pushed particularly strongly in France, a country where up to 50% of the population plays video games and 1000 new board games are developed each year. The country also has around 720 escape rooms, where participants are locked together in a room and given a set period - usually an hour - to find clues and solve riddles and problems in order to unlock the door.

French National Railways (SNCF) has developed this concept into a training module. Trainees are presented with a futuristic world where they must take over from a malfunctioning AI to efficiently evacuate different planets. This concept is a long way away from running a busy railway, but the skills they learn and exhibit over the 60 minutes, which is followed by a 45 minute debrief with a tutor, are ones they can then use on the job.

“For us it’s an opportunity to see what the difficulties for learners are,” explains SNCF training project manager, Ms Noémie Rouault. “It allows them to acquire content in a more efficient way.”

In order to gauge what skills will be required in future, and which ones will be most important, the UIC launched the Future of Work and Training working group in January. The project is being coordinated by Mr Elio Minerva, human resources coordinator at the FS Academy, and includes FS, German Rail (DB), SNCF, Russian Railways (RZD), Austrian Federal Railways (ÖBB), Russia’s University of Transport (RUT), Slovenian Railways, Rail Training International (RTI) and Railcenter, a Netherlands-based training centre.

“The main idea is finding which tasks that will remain with humans, and which tasks will be shifted to the algorithm, because if you want to train people this is an area that will be helpful,” says.

The main scope of the research, which is initially focusing on infrastructure maintenance, traffic control, driving and train assistance, is to describe future work scenarios, make forecasts of the impact on jobs, and match the best learning and development technologies to train the workforce required to carry out these tasks.

The first step for the working group has been to interview line managers to find out how they expect to deploy certain technologies within their companies, what will have the biggest impact on jobs, and which training methods will have the greatest impact.

Minerva says that in future, there are likely to be four categories of tasks comprising those operated by:

“The main idea is finding which tasks that will remain with humans, and which tasks will be shifted to the algorithm, because if you want to train people this is an area that will be helpful,” Minerva says.

So far, the initial results from the study have shown that infrastructure maintenance is expected to be simplified with the introduction of sensors, which will centralise asset management. 5G is also expected to have a large impact by increasing the quality of data gathered from the network and fleets, affecting how they are managed.

Minerva says that training departments are facing the challenge of producing more new staff with digital skills as well as more practical skills, and doing so in a more “personalised way.”

The industry still has a lot of questions it is looking to answer, and very complex issues to figure out. But regardless of how it does this, the new staff due to enter the workforce in the next five, 10 or 20 years will need to bring with them a different set of skills from those working in the industry today.