The opening of the Dubai Metro in 2009 showcased the potential of rail in the Middle East and became a symbol of the ambition of the region. 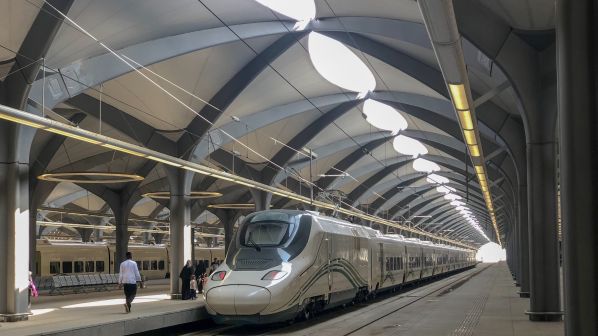 In 2010, MEED estimated that the total value of planned transport projects in the Middle East exceeded $US 400bn, and noted that “across the region, flagship rail projects have been pushed forward as governments recognise that the rapid economic development of recent years must be sustained with new transport infrastructure.” The centrepiece of these plans was the 2117km Gulf Railway crossing six countries between Kuwait and Oman.

But the promise of this initial “age of ambition” proved challenging. Whilst there have been some noticeable successes over the last decade, such as the opening in Saudi Arabia of the 453km Haramain high-speed line in 2018, and the initial 264km of the Etihad Rail network in the United Arab Emirates (UAE), most of the ambition still remains unfulfilled.

The cost and complexity of the projects placed doubts on the deliverability of that vision, whilst the fall in the price of oil created new fiscal challenges for governments hoping to finance new infrastructure. Meanwhile the promised emergence of next generation technologies - automated vehicles and hyperloop - raised concerns that new infrastructure could become obsolete even before it opened. And so, the initial ambition turned into a period of stagnation, where promising plans remained, but lacked a credible route to market.

A decade on from the opening of the Dubai Metro, the opening of the new metro in Doha, Qatar, and the imminent completion of the first metro lines in Riyadh may be the catalyst for a revival of the wider ambitions for a rail network across the region. However, there are some noticeable differences between the current plans and those that proved undeliverable a decade ago.

First, there is a growing realisation that for rail to remain relevant, it must embrace next generation technologies. We are seeing a much greater emphasis on digital systems to support higher service frequencies, enhance operational reliability and reduce lifecycle costs of rail systems. For example, Etihad Rail’s recent award of a $US 435m contract to Hitachi Rail to install ETCS Level 2 signalling on a new rail link between Ghuweifat on the Saudi border and Fujairah demonstrates the growing focus on maximising the operational value of investment. Similarly, the MoU between Saudi Railway Company (SAR) and Huawei agreed in July showcases the potential for partnerships to develop a new generation of digital solutions.

Secondly, there is a growing recognition of rail’s role in an integrated transport and land use strategy. Project promoters are increasingly recognising the need to build first and last mile connectivity into their plans, and are actively embracing emerging mobility solutions. This includes a proposal to use a Navya automated shuttle in Masdar City in Abu Dhabi, and the development of the Dubai Integrated Mobility Platform and sustainable smart transport scheme which will coordinate connectivity with the metro and ultimately support the development of a Mobility as a Service (MaaS) model.

Thirdly, there is a real partnership approach to securing global expertise to help develop schemes whilst at the same time relying on those international experts to help build the capability of the local workforce. The Saudi Railway Polytechnic in Buraidah Al-Qassim is one example of efforts to train the local workforce to deliver rail services, whilst the contractual requirement to support local sourcing of equipment is helping to establish a local manufacturing base.

In addition to this operational discipline, there is a new sense of financial realism around the development of these schemes.

First, there is a much clearer focus on the business case for specific projects, and a more selective approach to promotion. Projects have become less about joining dots on the map, and more about providing specific links to international markets. For example, the initial development of Oman Rail, which has ambitious national plans within the Gulf Railway programme, is now tightly focused in its initial stages on a line connecting the mineral deposits in Shuwaymiyah and Manji in Dhofar governorate with the Port of Duqm.

Secondly, the region has recognised the need to supplement its own funds if it is to deliver on its plans, and (like much of the world) is looking to China for support. This is apparent both in the growing number of contracts with Chinese firms to deliver projects, such as the MoU signed between SAR and CCECC to deliver the Saudi Landbridge linking Riyadh and Jeddah and the recent award of the civil engineering contract for Etihad Rail Stage 2 to CRCC, as well as increased levels of inward investment by China and potential use of Belt and Road funding across the region.

Projects touted at the beginning of the decade, which came to nothing are now refocusing with Chinese funding in mind. In addition to the Saudi Landbridge and Etihad Rail Stage 2, this includes the start of procurement to build the Oman Railway and the award of a consultancy contract in October for the 25km $US 3.5bn King Hamad Causeway road and rail link from Dammam, Saudi Arabia to Bahrain, where work is scheduled to begin in 2021. This suggests that there is now a clear path to delivering the backbone of the long-anticipated Gulf Railway.

The region is focusing on more deliverable schemes which will be properly integrated into the transport and economic networks, will capitalise on new technology to improve their efficiency and will, over time, be operated and maintained by a suitably qualified local workforce.

Combined with a clearer understanding of the financial realities of developing rail mega projects it appears that the ambition, which caused inactivity, has given way to a new age of pragmatism which could finally herald the development of a substantial rail network across the Middle East.