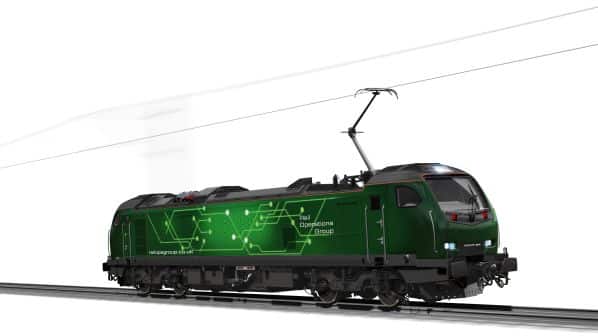 STADLER announced in July that it had completed manufacturing of the carbody for the first class 93 locomotive it is building for Rail Operations UK (ROUK) at its factory in Valencia, Spain, and that it is on course to deliver the first locomotive as planned by the end of March 2023.

ROUK has ordered an initial batch of 10 class 93s from a contract for 30 of the tri-mode Bo-Bo locomotives signed in January 2021. The new locomotive type represents a major upgrade on its current fleet, and which ROUK group president, Mr Karl Watts, believes will help to transform its offer to the market.

The class 93 is based on the diesel-electric class 68 and electro-diesel bi-mode class 88 locomotives built by Stadler for the British market between 2013 and 2017 but with several key differences. Perhaps most noteworthy, and a first for Britain, is the availability of four traction modes: electric, diesel, diesel-battery, and battery.

This is the first use of LTO on a British locomotive and the batteries can also provide traction power alone. Watts says this was not included in the original specification, but Stadler was asked to incorporate it, and he says it will prove beneficial by offering emissions-free operation on non-electrified sections, including stations and tunnels, and reduced noise in sensitive areas.

Watts says the addition of the battery was the only design change required for the class 93 compared with the bi-mode class 88. However, he says there were challenges with this development. Firstly, the weight of the initial battery system chosen would have taken the locomotive’s weight beyond 86 tonnes, restricting use across the British network. There was also limited space within the locomotive to accommodate the batteries.

“Something had to give,” Watts says. “The compromise was the removal of the rheostatic brake resistors. Rheostatic braking uses the conversion of kinetic energy to afford traction motor braking. However, it converts this energy into heat through the braking resistors which is lost to the atmosphere. With zero energy recovery, rheostatic braking offers little value apart from contributing marginally to reducing brake block wear. The decision to sacrifice the rheostatic brake resistors for traction batteries, which enable kinetic energy recovery, was a no-brainer for me. It is all about energy efficiency.”

Watts adds that the use of LTO over lithium oxide batteries offers a rapid charging range of 10-20 minutes. The variance depends on the source of the charge, whether it is from the overhead line or the diesel/alternator set, as well as ambient conditions and the age of the battery. LTO also has a 10-90% technical charge range, which is higher than other battery types, which may only have 40-80%. The batteries have a lifecycle of around eight years and Watts adds that they offer improved thermal management, although the cooling system still accounts for 50% of battery pack weight.

The locomotive is fitted with both two-pipe automatic air brakes as well as an electro pneumatic braking system, offering the class 93 compatibility with a multitude of passenger trains.

The locomotive’s flexibility is also evident in the use of the CargoFlex coupling supplied by Voith, which is fitted with a type 10 Scharfenberg automatic coupler as well as a screw coupling, and is adjustable to Britain’s five coupling heights.

The coupling has a drawbar strength of 850kN and has the scope to support a digital automatic coupling (DAC), currently on trial in continental Europe, if and when the technology is adopted in Britain. The class 93 will make use of both a 42-way jumper cable socket as well as a UIC 558 jumper cable for data transfer. The locomotives are also ready for future upgrades to 5G telecoms and ETCS.

Type testing will begin in November at Stadler’s Albuixech plant, where there is a short point-to-point test track, and switch to Britain following delivery of the first locomotive in March 2023. Line testing and approvals are scheduled to continue until July, with the locomotive entering service the following month. Watts says Stadler is partnering with TÜV Rhineland on certification and that a stint at the Velim test circuit is not necessary because the class 93 is “90% based on the class 88.”

The use of ABB’s latest transformer in the ac traction system, which is equipped with insulated-gate bipolar transistors (IGBT), requires testing for EMC compatibility. Tests are also required due to the differences in dynamics and changes in the kinematic envelope when operating at the locomotive’s top speed of 177km/h, which compares with a maximum of 160km/h on the class 68.

As a result, the secondary pneumatic suspension was improved. It features two coil springs and three hydraulic dampers on each side, so four and six respectively on each bogie, which are complimented by yaw and lateral dampers. In addition, Watts says a different traction motor gearbox has been adopted compared with the class 88.

“No other locomotive in Britain has an EP brake system fitted as standard.”

The locomotive’s enhanced performance is most evident in its highly impressive wheel-rail tractive effort. Excellent acceleration provides the class 93 with a significant advantage over existing fleets; Watts says the class 93 will be able to traverse the infamous Shap gradient in Cumbria at 80km/h where some freight traction is limited to 32km/h.

While running at 177km/h is possible, it is not optimal, according to Watts, due to the extra energy required and the associated costs, particularly in the current climate. Instead, he favours a driving profile that matches prevailing conditions. As a result, he says it is unlikely that the 4.6MW power boost will be used that often but will prove a good option when, for example, the class 93 needs to maintain a high-level of performance when operating in mixed traffic on the West Coast Main Line.

He adds that the higher speed and the locomotive’s flexibility will finally make a viable case to disrupt British freight operations. In particular, he says the train class system to prioritise certain train types over others when in traffic, dating from 1960, is increasingly irrelevant and needs to be changed. “A freight train carrying high-value goods is far more important to the economy and society than an off-peak commuter train carrying a few passengers, but at the moment we have to wait in a siding,” Watts says.

ROUK is a provider of ad-hoc passenger and freight traction as well as movements of rolling stock across the British network, charter operations and traction to support infrastructure testing and monitoring. The class 93 could support all of these activities. However, Watts says he is particularly excited about using the class 93 to boost intermodal operations. He says it is his ambition to finally increase the maximum speed of these services on the network above 120km/h, which dates from their introduction with the Freightliner service in 1965, which he says needs to change to bring “the British railway into the 21st century.”

He also foresees additional opportunities for Stadler in the British market with the class 93.

Under ROUK’s contract, it will decide whether to proceed with a second batch of 10 locomotives by December. This appears a formality and Watts says the order could ultimately total 60-70 locomotives.

With many of Britain’s 650 main line freight locomotives now approaching their 25th birthday, most notably the class 66, ROUK is unlikely to be the sole customer. Indeed, the locomotive has the potential to become the backbone of the freight fleet over the next few years, potentially heralding a new era of improved traction performance.