TSO develops Senegalese base from scratch

Constructing a line in a country where you have no established base and no existing supply chain is a significant challenge. David Burroughs talks to Sylvain Peltier, NGE country manager, Senegal, about how TSO geared up to complete the freight section of the Dakar TER project. 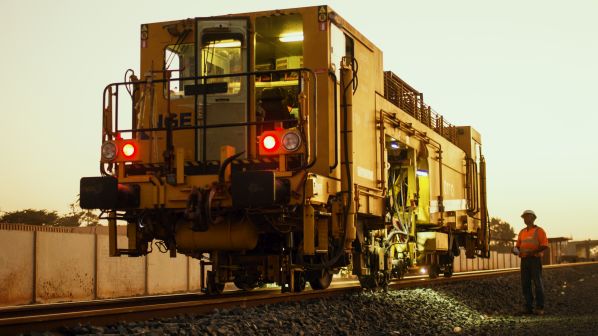 TSO imported its own equipment, including locomotives, ballast tamping and levelling machines, a rail welder and other on-track hardware from Europe and South Africa.

WHEN TSO first arrived in Senegal in mid-2017 to work on the country’s TER Express project, the company had to establish its local presence from scratch.

TSO, a subsidiary of NGE, led a consortium including NGE Contracting, CIM and CDE, which was awarded a contract by Senegal’s National Agency for Investment Promotion and Major Projects in 2017 on behalf of the Ministry of Infrastructure, Land Transport and a Better-Connected Nation to rebuild the 51km freight line from the centre of Dakar to Diamniadio.

The project is a component of the TER express project, which involves the construction of an electrified double-track connection to Dakar’s new airport. The initial 36km Dakar - Diourbel section was handed over in January 2019, with the remaining 21km section to the airport currently undergoing testing and commissioning.

The project to replace the existing metre-gauge freight line is designed to substantially improve the reliability of freight services between the port in Dakar and Senegal’s interior, eliminate derailment risks and increase traffic volumes.

“We needed to find offices, to recruit people and be ready in time to begin construction.”

The project was not TSO’s first in Africa, Peltier says, but it was the first project the company has undertaken in Senegal.

“We arrived in the country in 2017 and we had to establish a working company in Senegal,” says Mr Sylvain Peltier, NGE country manager, Senegal. “We needed to find offices, to recruit people and be ready in time to begin construction.”

An immediate challenge was recruiting staff with specialised skills in a country that has not undertaken a major rail project in decades. Combined with a lack of internal funding for training, this had resulted in a skills shortage. In order to reverse this, TSO brought in a few staff members from abroad to oversee the project, who in turn trained the 160 Senegalese staff members which the company hired.

TSO imported its own equipment, including locomotives, ballast tamping and levelling machines, a rail welder and other on-track hardware from Europe and South Africa.

As part of the preparations to launch construction in June 2018, TSO began establishing supply chains for the components and materials needed for the project. TSO was given full control of the technical preparation work, purchasing and the entire logistics chain, which made it possible to ensure continuity of supply.

“In Europe things run quite well, and if you need something you can go somewhere and pick it up,” Peltier says. “But once you are implementing a rail infrastructure project in Africa, you need to be sure that your design is fit for the purpose, because if you find that after six months you’ve made a mistake, you won’t just lose six months, you’ll lose one year or two years.”
Peltier says the smooth implementation of the project started with the work done by Setec, France, which was in charge of the detailed design and control of the works.

“Once we received the design we were in charge of writing the technical specification to fit to the design,” he says. “We spent a lot of energy to be sure what we ordered was right for the project.”

TSO initially looked to source the 86,000 concrete sleepers required locally, but as this was not possible within the required timeframe, they were supplied by Satepor, Portugal. British Steel France supplied 57,000 tonnes of rail, which was manufactured in Scunthorpe, Britain, while Vossloh Cogifer, France, supplied the 23 points and crossings. TSO was able to source the 150,000 tonnes of ballast needed for the project locally from Gecamines, a subsidiary of Vicat Group, France.

Much of the work to construct the new line was undertaken through the crowded suburbs around Dakar, and Peltier says one of the achievements was that they were able to carry out the work in the crowded environment without incident.

“There were many people around, and the population was not used to seeing such a big project in the country, so safety was a big issue for us,” he says. “Fortunately we did not have any significant accidents, and over the last year we didn’t have any accidents at all.”

“We spent a lot of energy to be sure what we ordered was right for the project.”

TSO was required to maintain services on the existing freight line, which serves the port in Dakar, during the project, and work was divided into multiple stages to allow for this.

The last major scare was the outbreak of Covid-19 around the world, which caused many construction projects to come to a grinding halt.

TSO implemented the same processes used to protect workers in Europe, including holding regular safety briefings and supplying staff with protective equipment. Work was able to continue as scheduled, with the freight line fully in service in April.

Following successful implementation of the freight line, Peltier says TSO and NGE are looking to utilise the base developed to further cement their position in Senegal. The company is looking to bid for upcoming rail projects, including maintaining the freight line and the renewal of the wider network, and is also looking at other sectors outside rail served by the wider NGE group.

“It’s been a big success for us,” Peltier says. “No major accidents, developing a good team three years after starting from nothing, the quality of the job, and the satisfaction of the customer, partners, employees and suppliers - it really is a win-win.”