With the start of tunnel boring on the eastern extension of RER Line E in Paris, momentum is building for the project which promises to ease congestion on the city’s saturated commuter network. Kevin Smith explores the intricacies of the undertaking and outlines the challenges facing contractors. 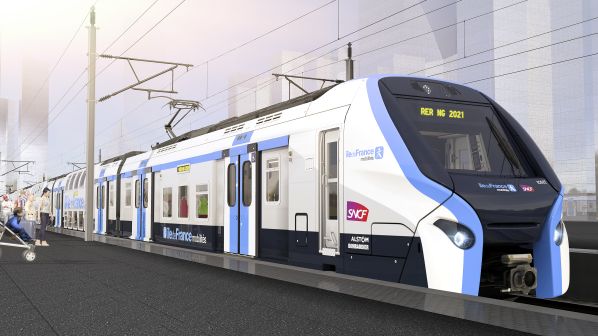 THE ground beneath the streets of Paris, like many modern metropolises, is a Swiss cheese of tunnels and underground infrastructure. Work on the latest addition, a 6km underground extension of RER Line E from St Lazare west to La Défense began on February 19 when TBM Virginie entered the ground.


The first test train will be delivered by the end of this year.

As well as the underground section, the scheme involves upgrading 2km of existing underground infrastructure between La Défense and Nanterre-la-Jolie and upgrading the 47km line to Poissy and Mantes-la-Jolie to accommodate Line E trains on the same tracks used by Transilien Line J services to Vernon.

Ile-de-France Mobility and French National Railways (SNCF) are also spending €2bn on new RER New Generation double-deck EMUs (pictured) built by Alstom and Bombardier that will be used on Line E as well as RER Line D from 2021. The first test train will be delivered by the end of this year. The plan is to complete the extension to Nanterre and the complete project, including high capacity signalling in the central section, by 2024.

The impact of the project for Paris commuters is expected to be significant.

The majority travel from the east and the west suburbs of the city during the morning and evening peaks. This places significant pressure on RER Line A, which currently serves 1.2 million passengers per day. With passengers packed into these trains, and the first sections of the Grand Paris Express orbital metro network not due to open until 2030, the extension of Line E is considered a more immediate solution to ease congestion. The trains will operate at speeds of up to 120km/h on the core section, saving commuters travelling from the western suburbs to La Défense around 17 minutes on their current journey.

Mr Xavier Gruz, director of the Eole-Nexteo project at SNCF, says it is estimated that more than 50% of Line A passengers travelling through the central section will switch to Line E once it comes on line. “For instance, people who commute from La Défense to Gare du Nord will no longer go through Châtelet and will use Line E,” Gruz says. “We also see that 10-12% decrease in traffic on lines B and D, which go through Gare du Nord. The objective is to take off some of the load that is supported by the RER lines inside Paris.”

Line E itself is forecast to carry 700,000 passengers per day, up from around 340,000 at present. Operation on the line’s 20km core underground section will be enhanced by the introduction of CBTC, which will enable 22 trains per hour, per direction to use the complete Rosa Parks - Nanterre-la-Folie section during the peak, with 16 of these trains operating on the line east of Rosa Parks, which comprises branches to Tournan and Chelles-Gourney, and six on the western section from Mantes-la-Jolie. There is the possibility to increase capacity to 28 trains with headways of 108 seconds once the Paris - Normandy upgrade is completed around 2030. Currently trains are operating at 180-second intervals.


“It gives us one year to test out the system and make sure that it can be scaled up,” he says.

SNCF Engineering is designing the Nexteo CBTC solution with support from Paris Transport Authority (RATP), which has deployed CBTC on Paris metro lines 1, 3, 5, 9 and 14, and industry partner Siemens, which was awarded a €186m contract in 2016. Trains will operate at GoA2 in the central section, which encompasses the new line as well as the existing underground line from Haussmann-St Lazare to Rosa Parks.

Siemens France is supplying its Vicos operational control system and Airlink radio communication for the project. While preparatory work to install the new signalling system alongside legacy equipment began earlier this year, installation of Nexteo equipment will begin in 2022. Gruz says the new tunnel will open initially with the use of a lineside signalling system, with the aim of commissioning Nexteo by the end of 2023 and fully opening the line the following year. “It gives us one year to test out the system and make sure that it can be scaled up,” he says.

The new project will add three new stations, including two new entirely-underground stations at CNIT-La Défense and Porte Maillot, and a new surface station at Nanterre La Folie, which will connect with the existing underground platforms. Modifications will also be made to existing stations with the line set to interchange with RER lines A and C, metro Line 1, light rail Line T2, and lines 15 and 18 of the Grand Paris Express network.

Inevitably building a new tunnel in the heart of Paris presents challenges. Gruz says the area around La Défense in particular is difficult because of the density of the buildings and because construction of the station itself is taking place directly below the iconic Centre for New Industries and Technologies (CNIT) building.

The 11-storey structure is supported by temporary jacks while work takes place in a vault which has been excavated with three contact points to the building. Gruz says great care has been taken to ensure that the work does not disturb everyday activities in the building, which is home to shops, a hotel and offices. “We also have to comply with the maximum permissible level of noise and vibration night and day because of the hotel,” Gruz says.

Contractors face similar challenges at Porte Maillot. Here work is complicated by the station’s proximity to the Paris Congress Hall as well as the presence of the neighbouring automated metro Line 1, which is used by 800,000 passengers per day as well as RER Line C, road tunnels and a car park. “We are trying to build the new station in between all of these pieces of infrastructure,” Gruz says.

The final major challenge relates to minimising the impact on everyday Parisians. With construction taking place in the heart of the city, Gruz says care is taken when delivering equipment. For example, the concrete segments used by the TBM, which was built by Herrenknecht, Germany, and at 1800 tonnes and with an 11m-diameter, is the biggest currently working in Europe, are delivered by rail up to the last mile where transport switches to road. In addition, barges on the River Seine are transporting spoil from the double-track single bore tunnel out of the city centre. However, with work taking place at 30m below the city’s streets, and with the area under construction only inhabited in the 19th century, Gruz says disruption from archaeological finds is not likely.

Work to upgrade the existing infrastructure is taking place alongside construction of the new tunnel. Specifically, this involves upgrading the existing line to Poissy and Mantes-la-Jolie, including realigning tracks and infrastructure on the section beyond Nanterre La Folie. Contractors will also construct a new 800m elevated section and deliver improvements to increase speed and capacity on existing passing loops, and enhance platform capacity at stations, including the total reconstruction of Mantes-la-Jolie.

The work will involve installing new computerised interlockings, with Alstom responsible for the western section to Mantes-la-Jolie under a €112m contract, and Siemens delivering the eastern portion to Chelles and Tournan under a €163m agreement.


SNCF will be keen to avoid the problems that have delayed the London project and deliver the scheme on time and budget.

“We are currently developing tools to ensure the connection with the ATS+ system for the operators using this system,” Gruz says. “The objective is to gain one path during the peak and also to make the system more robust and reliable. This is a line that does not work very well when there are a lot of delays.”

Gruz compares the Line E project with London’s Crossrail and the signalling upgrades in Copenhagen. “These are the two benchmarks that we have worked from,” he says.

Like Crossrail, the Line E project will offer enhanced cross-city connectivity and go a long way to providing desperately needed extra capacity. Although as the project ramps up in the next few years, SNCF will be keen to avoid the problems that have delayed the London project and deliver the scheme on time and budget. Long-suffering RER Line A commuters cannot wait much longer.