US light rail funding: the Tiger loses its stripes 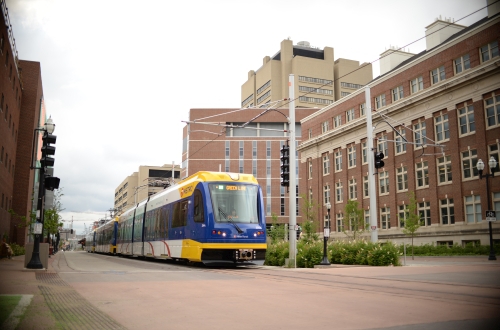 If there was any doubt about US president Donald Trump’s intentions to defund federal transit investment programmes, his proposed budget for the 2018 financial year brought his position on public transport funding into sharp focus. With a 13% ($US 2.4bn) cut in the Department of Transportation’s budget, key grant funding programmes are now in the firing line, clouding the prospects for urban rail development in many US cities.

The Tiger grant programme was established as part of the Obama administration’s 2009 economic stimulus package to provide an extra source of funding for transport projects. Tiger grants have often been used in circumstances where it has not been possible to raise significant match funding. The proposed budget estimates that scrapping the programme would save $US 499m annually.

CIG is the FTA’s primary grant programme for funding major capital transit investments, including light rail projects. The Trump budget proposes an allocation of $US 1.2bn for CIG. This would be sufficient to cover all existing Full Funding Grant Agreements (FFGAs), but is $US 549m below the level authorised for the programme in the 2015 Fixing America’s Surface Transportation (Fast) act. This cut means there will be insufficient funds to issue any further grants for new or small start projects. According to a press release issued on July 11 by the American Public Transportation Association (Apta), 54 projects are currently in the CIG rating process. Cumulatively these projects account for $US 38bn in new investment, 800,000 jobs and $US 90bn in economic output nationally.

Eviscerating these two funding schemes could mean a rethink for light rail projects across the country. According to IRJ Pro Project Monitor, nearly 500km of light rail lines are at various stages of planning in 22 cities across the United States, representing a total investment of more than $US 30bn.
The president had urged Congress to make heavy cuts to these programmes immediately, but they did not acquiesce, opting to allocate the full $US 500m for a ninth round of Tiger funding - albeit only State of Good Repair grants - and maintain CIG funding. However, this budget compromise, to avoid a federal government shutdown, only covers the remainder of the 2017 financial year, which ends on September 30. This puts future federal funding on the clock, with light rail projects scrambling to secure funding before the next budget, in which the same concessions may not be made.
The proposed 2018 budget states: “Future investments in new transit projects would be funded by the localities that use and benefit from these localised projects.” This is a marked change from the current model, whereby federal funding covers up to 50% of the capital cost of construction.

Thud recommends an overall budget of $US 11.8bn for the Federal Transit Administration (FTA), $US 526m more than the President’s request. This includes $US 1.75bn for CIGs and $US 1bn for FFGAs for transit projects. Thud also allocates $US 145m for core capacity projects; $US 182m for state and local “Small Starts” projects; and $US 400m for new passenger rail projects.

While this may soften the blow for projects at a more advanced stage of development, the longer-term outlook looks much more uncertain, particularly for projects that currently lack final funding agreements.

These include the 28.5km Durham Triangle Transit LRT in North Carolina. In April 2017 commissioners in Durham County approved an updated transit plan and cost sharing agreement for the project. Under the revised funding plan, Durham would meet 81.5% of the local cost, with the remainder coming from Orange County. Both counties would use a half-cent local sales tax to help fund the project, which was due to be completed in 2028. The remaining 8.6% would come from state Low Carbon Transportation Cap and Trade Funds.

It is now unclear whether the federal government will match this local commitment. Prior to the announcement of the proposed budget cuts the timeline for the project estimated a 2020 deadline for federal funding, which would cover 50% of the $US 2.48bn construction cost.

Likewise, in Minneapolis federal funds are expected to cover half of the cost of both the $US 1.9bn Southwest LRT and the $US 1.5bn Blue Line. The Southwest LRT has so far secured $US 10m of the $US 929m in federal backing being sought for the project. This funding was included in the interim budget compromise. However, without a full-funding grant agreement it may find itself with no federal cash in the next budget.

On the same day Trump was elected president in November 2016, voters in Seattle approved the Sound Transit 3 (ST3) Proposition 1 ballot, unlocking a $US 53.8bn 25-year investment in the public transport network through local sales taxes, which will raise $US 27.7bn by 2041. ST3 will expand the light rail network to 187km, five times its current size.

Sound Transit has two light rail projects that are currently without full funding agreements. The 20.3km Lynnwood Link currently requires a 50% federal commitment to help fund the $US 2.34bn construction cost. The project has received $US 100m in federal funds as the first instalment of the proposed $US 1.17bn FFGA. However, if the FFGA cannot be finalised there may be no further federal funding. Sound Transit is also seeking $US 500m from the FTA to cover around a third of the cost of building the 12.2km Federal Way extension.

On May 25 Sound Transit and Los Angeles County Metropolitan Transportation Agency issued a joint statement striking back at Trump’s budget proposal. “The administration’s assertion that our regions can deliver transit solutions for our citizens without federal partnership is uninformed, misguided, and unfair,” the statement says. “The voters of our communities stepped up and voted to tax themselves to provide a path out of punishing congestion. For that bold action, they should be rewarded at the federal level, not punished. This wrong-headed budget proposal ignores the will of our local voters and the real-world challenges we are facing in our rapidly growing cities.”

With the expansion of mature systems and numerous start-ups moving towards construction, cities and states are putting serious money behind light rail. Whatever the president might think, many voters in US cities expect the federal government to continue doing the same.