Ben Altman and Sharon Odetunde with Britain’s Rail Safety and Standards Board (RSSB), explain how research into low rail adhesion during the autumn is leading to new approaches to solving this serious age-old problem. 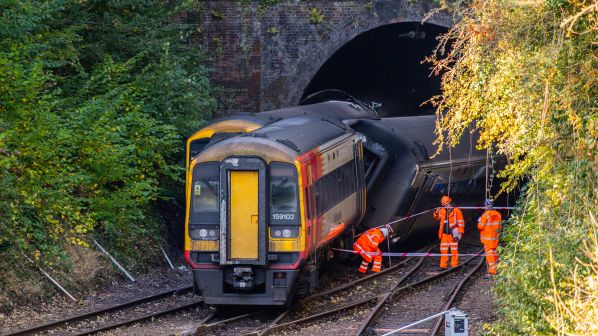 Britain’s Rail Accident Investigation Branch identified low adhesion as a major contributing factor in an accident between two DMUs at a junction near Salisbury in October. Photo: Jack Boskett

CONTAMINATION of the railhead and wheelsets is caused by a vast array of biological, chemical and physical factors, some of which cannot be easily monitored or controlled. While railways are predominately affected by low adhesion during the autumn, they can encounter low adhesion issues throughout the rest of the year, for instance as a result of moisture, diesel fuel or grease.

Low adhesion conditions can result in safety incidents such as signals passed at danger (Spad) and station overruns. Contamination can also electrically insulate the connection between the wheel and track, and if track circuits are used to detect the presence of trains this can lead to wrong-side track circuit failures.

The Rail Accident Investigation Branch (RAIB) identified low adhesion as a major contributory factor to a recent accident when two DMUs collided at a junction near Salisbury, Britain, on October 31 2021 injuring one of the drivers and 13 passengers.

Railways spend significant sums to manage low adhesion issues in many countries. According to the Rail Safety and Standards Board (RSSB), low adhesion is estimated to cost the British rail industry and wider society around £355m each autumn. The impact of low adhesion has immediate negative effects for customers, can lead to damage of wheelsets and track and affect train drivers’ morale and confidence when they fail to bring a train to a halt.

While the rail industry has devoted a significant amount of research to better understand the causes of low adhesion and suitable mitigations, there remain gaps in knowledge to be able to overcome the adhesion challenge. The Adhesion Research (Adere) programme was initiated by RSSB to contribute to the development and demonstration of new knowledge and solutions required to achieve adhesion conditions unaffected by and independent of the weather and climate.

The combination of optimised Wheel Slide Protection (WSP) systems and sanders are vital assets in braking under low adhesion conditions. RSSB has commissioned numerous research initiatives to enhance sander technology. This has resulted in the development of double variable rate sanders (DVRS) which deliver sand at variable rates depending on train speed so that sand delivery is optimised at both high and low speeds, resulting in more consistent and improved braking in low adhesion.

The programme demonstrated that on a four-car train, DVRS can halve stopping distances under low adhesion conditions compared with single fixed-rate sanders, delivering 6%g braking performance in very low adhesion conditions, which is a significant step forward for both train operation and timetable planning.

To demonstrate the in-service braking benefits of DVRS, two West Midlands Trains class 323 EMUs were fitted and trialled on the Birmingham cross-city line.

Unlocking the benefits of DVRS is dependent on train driving practice making use of the available equipment by using a level of brake demand (step 2 or equivalent) that triggers sanding. The trials were supported by DVRS driver familiarisation runs, to provide drivers with experience of the low adhesion braking benefits that enhanced sanders provide.

The response from drivers was overwhelmingly positive. “This is brilliant, absolutely brilliant, a marked improvement in stopping,” says Mr John McDermott, train driver and instructor with West Midland Trains.

The in-service pilot also demonstrated that retrofitting DVRS is feasible and practical; and confirmed that DVRS delivers adhesion conditions to support seasonally agnostic, consistent braking performance, regardless of underlying railhead conditions. The entire class 323 fleet is now being retrofitted with DVRS and other fleets are currently under review for potential fitment.

Fundamental science and modelling are other key areas in the Adhere programme, and areas where international collaboration has led to real benefits.

The World Congress on Rail Research (WCRR) founding members have shared knowledge and international best practice on optimised braking and low adhesion research for many years. A notable collaboration in this area has been between Britain and Japan, involving technical visits, doctoral training and secondments.

A highlight of this collaboration has been between JR East, RTRI and RSSB on the topic of leaf contamination in the wheel-rail contact patch. Understanding how leaves break down and bond to the railhead is key when developing mitigations to combat the problem of leaves on rails. Both Japanese and British railways experience challenges relating to leaf contamination, and a collaborative project was carried out that involved the chemical and material analysis of a range of common leaves. The aim was to identify the substances that cause low adhesion when crushed in the contact patch and consider ways to mitigate their effects. Key components that cause low adhesion were identified in the leaf samples and mitigations proposed, including continuous drag braking. This fundamental research has laid the foundation for further research into the biochemistry of leaves, bonding mechanisms and the development of chemical mitigations.

The ability to simulate train braking, particularly in low adhesion conditions, is a valuable tool for train manufacturers and operators as it provides a cost-effective way to optimise systems and investigate future enhancements. WCRR 2022, which will be held in Birmingham on June 5-10, will showcase an innovate train braking model called Low Adhesion Braking Dynamic Optimisation for Rolling stock (Labrador) developed by the University of Huddersfield through its strategic research partnership with RSSB. The model has been developed to simulate train braking in both normal and low adhesion conditions. It can be used by operators and train manufacturers to optimise braking systems, simulate the effect of different sander configurations, and improve wheel slide protection systems.

Labrador has been developed from a series of modules representing braking sub-systems. This makes the model unique, as it is possible to build representations of a wide variety of trains from older vehicles to future designs, enabling the capabilities of new rolling stock to also be tested.

The model has been validated using data gathered from the DVRS site trials, and it has recently been enhanced to include a range of options for adhesion profiles covering different contamination types.

International collaboration with Virtual Vehicle in Austria and support from a range of European train manufacturers and operators has been vital to produce a tool that the industry can have confidence in. Delegates at WCRR 2022 will be able participate in an interactive demonstration at the University of Huddersfield’s stand in the UK Pavilion.

Continuing optimisation of the wheel-rail interface and the achievement of reliable braking are challenges faced by railway networks around the world. WCRR 2022 will showcase world leading research in the areas of train braking and low adhesion mitigations. The programme will feature four sessions on these topics with 11 papers from organisations around the world including the Chinese Academy of Railway Sciences (Cars), Wabtec, Alstom, and Italian Rail Network (RFI). These papers will cover research on train braking challenges for high-speed rail, novel machine learning techniques to estimate low adhesion, and freight specific challenges at the wheel-rail interface.

WCRR 2022 will be held in Birmingham, Britain, on June 6-10 under the theme, Reshaping our railways post-pandemic: research with an impact. To register to attend, visit www.wcrr2022.co.uk