THERE was some seasonal cheer for passenger rail proponents in eastern Canada on December 12, when Via Rail Canada announced it had awarded Siemens Canada a $C 989m ($US 741m) contract to supply 32 inter-city trains for the Quebec City - Montreal - Toronto - Windsor corridor. 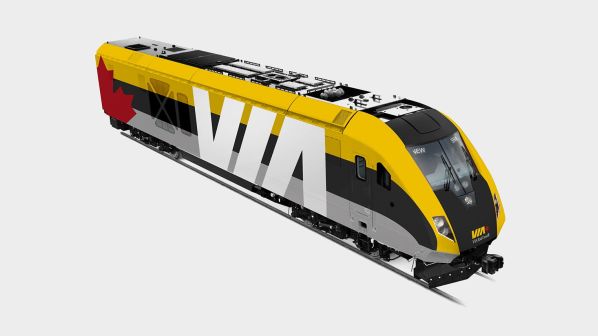 THERE was some seasonal cheer for passenger rail proponents in eastern Canada on December 12, when Via Rail Canada announced it had awarded Siemens Canada a $C 989m ($US 741m) contract to supply 32 inter-city trains for the Quebec City - Montreal - Toronto - Windsor corridor.

The fleet will enter service from 2022, replacing life-expired equipment and providing more than 9100 seats, a significant increase in capacity for Via Rail’s flagship route.

The announcement came two months after Via Rail celebrated its 40th birthday as the national passenger operator. Established as a Crown Corporation in 1977, Via Rail took over the operation of the remaining loss-making Canadian Pacific and Canadian National (CN) passenger services in October 1978. Through consolidation and eliminating duplication of transcontinental services, the finances of Canada’s passenger rail operations could be significantly improved, enabling Via Rail to invest in new equipment with the aim of turning a profit on its more promising routes.

In reality, Via Rail spent much of its first 40 years embroiled in a political tug-of-war. In 1981 the administration of prime minister Mr Pierre Trudeau slashed Via Rail’s budget, leading to swingeing service cuts, which were partially reversed by the government of Mr Brian Mulroney four years later. The axe fell again in 1990 when the operator’s budget was slashed from $C 600m to $C 350m, triggering another round of savage cutbacks which severed cities such as Calgary, Regina and Thunder Bay from the passenger rail map.

With far less passenger revenue and meagre government support, Via Rail limped on through the 1990s and 2000s, with further pressure on the budget unleashing service cutbacks in Quebec and British Columbia in 2012. The operator has continued to grapple with the everyday challenges of ancient rolling stock and inadequate fleet capacity, which has constrained its ability to respond to market demand on its core route through southern Ontario and Quebec.

However, under the stewardship of current CEO, Mr Yves Desjardins-Siciliano, the operator has experienced something of a turnaround in patronage, helping to strengthen the case for much-needed capital investment. “In 2014 we brought together a team to turn around the company on two fronts,” Desjardins-Siciliano said at Terrapinn’s World Rail Festival in Amsterdam in November. “Firstly, we moved from a transportation to a marketing organisation to grow ridership and revenue. We’ve grown close to 40% in the last four years. Secondly, we developed a long-term plan, including a new fleet for the Quebec City - Windsor corridor, and the government of Canada allowed us to go forward with that.”

Desjardins-Siciliano says a collective approach to improving service quality has helped to make the train a more attractive option. “We needed to look at what we could control, and one thing we could control was our attitude,” he says. “We have to ensure people are well treated in our care. We’re welcoming the public into our home and if you show empathy and sympathy people will come back to you more often and pay more money. Over the last four years employees have really bought into that strategy.”

Via Rail has now experienced 11 consecutive quarters of ridership growth. In the third quarter of 2018 passenger numbers increased 6.2% year-on-year, while passenger revenues climbed 5.1%. Ridership and revenues on the Québec City - Windsor corridor rose by 8.3% and 11.0% respectively.

With more trains in its fleet, Via Rail will be able to step up frequencies on the corridor, but both speeds and headways for inter-city passenger services are constrained by the need to share track with freight trains, which have priority on CN infrastructure. Breaking free of these shackles is central to Via Rail’s plans to offer a service that provides a genuinely compelling alternative to the car.

Alongside its request for funding for new trains, Via submitted proposals for the so-called High Frequency Rail project, which would see passenger services between Quebec City, Montreal, Ottawa and Toronto running at higher speeds on dedicated tracks, much of it making use of existing alignments. The operator says this would enable it to triple frequencies, reduce journey times by a quarter and increase on-time performance to 95%. The $C 4bn project would boost corridor ridership to an estimated 9.9 million passengers by 2030 and eliminate government subsidy for the route (currently $C 150m a year) by 2024.

While the fleet renewal programme is entirely government-funded, Via Rail envisages attracting private financing for its infrastructure plans. “There are a lot of pension funds looking for long-term infrastructure investments,” says Desjardins-Siciliano. “Canada is very steady politically with good economic performance. Raising money is not a big concern.

“This project will allow us to service the market in a way that gives people the flexibility to choose rail.”

Desjardins-Siciliano says he expects the federal government to make a final decision on the project by April, and if it gets the go-ahead, Via Rail could be running trains at 177km/h on the Quebec City - Windsor corridor by 2023.

Despite extensive trimming of the network, transcontinental services remain a feature of the Via Rail system and long-distance trains continue to bring in tourist dollars and provide vital links to remote communities.

Via is investing $C 154m in the modernisation of 75 long-distance coaches, including some vehicles acquired from the United States to strengthen the fleet. This includes a major upgrade of 17 Heritage coaches to make them fully-accessible for passengers with reduced mobility. Via Rail says the modernisation of the stainless steel Heritage coaches will extend their life “by a few decades” and is aligned with the company’s “reuse-recycle-repurpose” policy.

Via Rail’s fortunes are still inextricably linked to government policy and October’s federal election will set the budgetary agenda for the next five years. As the last four decades have proved beyond doubt, nothing is ever politically certain for Canada’s national passenger rail operator. But with major capital investment finally starting to flow and a robust business plan in place, Via Rail may well reach its half century in better shape than ever.