Vietnam is pushing ahead with the construction of its first urban rail projects in Hanoi and Ho Chi Minh City. The latest technology will be used representing a step-change in railway development for the country as Dr-Eng Akira Hosomi, chief representative in Vietnam with Japan International Consultants for Transportation (JIC), explains. 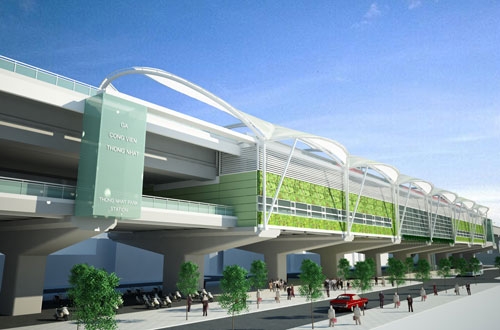 VIETNAM has enjoyed an average GDP growth rate of more than 7% during the last 10 years, the second highest among Asean countries. It has a population of 87 million, but much of the growth is being generated in Vietnam's two economic hubs: the capital Hanoi in the north with 6.6 million inhabitants, and the larger southern metropolis of Ho Chi Minh City (formerly Saigon) which is home to 7.4 million people.

Rapid growth in these two cities has led to familiar problems such as traffic congestion, accidents, air pollution, and noise which have been getting steadily worse. The Vietnam government is taking these issues seriously and its transport master plans include proposals to develop urban rail networks in Hanoi and Ho Chi Minh City.

In July last year, the government published a master plan for Hanoi which calls for the construction of eight urban rail lines by 2030, the first four of which are now moving ahead.

The 38.7km Line 1, which will run north-south, involves converting an existing Vietnam Railways (VNR) metre-gauge line into a double-track, elevated and electrified railway to provide a high-frequency service. Japan is supporting this project with a loan for engineering services and it is expected that investment in infrastructure and procurement of equipment will follow. The target for completion of the first 15.4km section is 2018. VNR is expected to operate Line 1 because the infrastructure will be used by both urban and inter-regional trains.

Line 2 will also run north-south, and will take the form of a completely new 35.2km underground metro. The project will be managed by Hanoi People's Committee (HPC) which is the equivalent of a city council. It has been agreed that Japanese funding will be used for the first 11.5km phase, which is due to open in 2017.

China is funding the construction of Line 2A which runs for 14km entirely on viaducts across the city centre.

The Ministry of Transport is in charge of construction, while it is planned to transfer the completed line to HPC which will become the operator. Line 2A is expected to open by mid-2015.

France is supporting the project to build the initial 12.5km section of Line 3, which will run for 21km between the western part of the city and the city centre. Some financial resources have already been committed including funding from the Asian Development Bank (ADB). HPC is in charge of this partly-underground and partly-elevated line, which is due to open by 2017.

Another five lines totaling 197.6km are planned in Hanoi, but only Line 5 is currently the subject of a feasibility study. This is being conducted by the Japanese for the Ministry of Transport with a view to building it as a public-private partnership.

In January 2007, the prime minister published a decision defining the transport development plan for Ho Chi Minh City up to 2020. The objective is to build a network of six urban railways and three other lines which will be either light rail or monorails.

The plan was modified in 2009, with Line 3 being split in two. It was also decided to connect Lines 1, 3A and 3B to provide a through service in the future. However, so far only two projects are underway despite several studies and interest from investors.

Line 1 is planned to run from Ben Thanh Market - which is regarded as the symbol of Ho Chi Minh City and its commercial hub - in a northeasterly direction to Suoi Tien. It will be 19.6km long, of which 2.2km will be underground and the rest elevated.

A loan agreement was signed by the Vietnamese and Japanese governments in March 2007 and it is hoped to complete the project in 2017.

Line 2 would be a new underground metro running from Thu Thiem via Ben Thanh Market and the Tan Binh district to Nga tu An Suong. The first section of the 18.3km line will be 11.3.km long. Germany has been supporting this project together with ADB and the European Investment Bank (EIB). Line 2 is also due to be completed by 2017.

The construction of these first six urban rail projects is ambitious for a country like Vietnam, which until now has only run a diesel-operated conventional metre-gauge railway.

The intention is to use the latest railway technology for all these new lines, but there is a significant shortage of skilled people with sufficient knowledge of such systems.

Another concern is that the donors and project owners vary between the different projects in each city and ensuring effective coordination will be a major challenge for the government. If this is not achieved, each project will become independent reflecting the standards of each donor country. For the sake of passengers' convenience when the projects are completed, there needs to be better coordination of projects, as well as frequent dialogue between the relevant donors, and the government needs to exert strong authority.