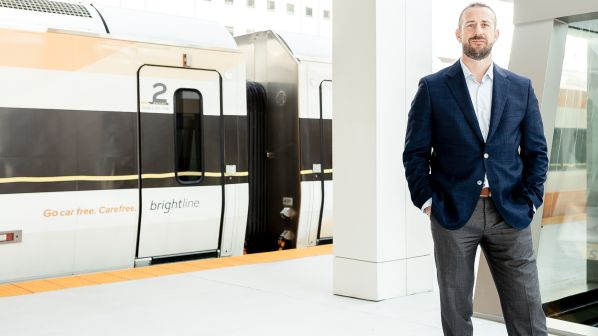 WHEN a passenger service was first announced in March 2012 by All Aboard Florida, the inter-city passenger subsidiary of Florida East Coast Railway (FEC), it was billed as a way to “transform the way people travel throughout the state, offering a faster, safer, and more enjoyable mode of transportation between Florida’s two largest metropolitan areas.”

Details of an initial three-stop service connecting Miami, Fort Lauderdale and West Palm Beach were released in July 2014, with the service using the existing 320km FEC freight line between Miami and Cocoa and continuing on a new 64km line to Orlando International Airport following the route of State Highway 528.

The service eventually launched nearly four years later than originally planned, on January 13 2018, with 11 trains a day operating under the Brightline brand between West Palm Beach and Fort Lauderdale. Services were extended to Miami Central in May, while frequency was ramped up in August to provide hourly services along the route.

The work to extend the line to Orlando at a cost of $US 2.1bn is now underway, with services expected to begin in 2021. The company confirmed in November it had begun negotiations with the Florida Department of Transportation and the Central Florida Expressway Authority (CFX) to lease property owned by the state and CFX to develop a high-speed line along the Interstate 4 highway corridor between Orlando and Tampa, with a station at Disney World. That 141km line is expected to cost $US 1.7bn. The one-way fare will be $US 35, compared with $US 100 for Miami - Orlando.

While the outlook for Brightline was already good, its prospects took a leap forward on November 16 with the announcement that the company had signed a 40-year strategic partnership and trademark licensing agreement with the Virgin Group, including rebranding as Virgin Trains USA. The company also filed a prospectus with the US Securities and Exchange Commission in preparation for an Initial Public Offering (IPO) on the Nasdaq Stock Exchange.

While some details of the IPO are yet to be released, including the quantity and value of shares and the amount Virgin Trains USA expects to raise from the offering, the company has already outlined $US 7.4bn worth of projects it intends to fund with the proceeds, either partially or fully, including the projects in Florida and a high-speed line from southern California to Las Vegas.

Corvina Holdings, an investment holding company with the Virgin Group, will also purchase an undisclosed number of shares, giving it a minority stake in the company, while the company will remain majority-owned by Fortress Investment Group which was co-founded by Mr Wes Edens, Virgin Trains USA’s chairman.

“It’s been an historic year for us,” Mr Patrick Goddard told IRJ in an interview before the IPO was announced. Goddard was appointed Brightline president in January 2018 and has overseen the service launch and the company’s expansion.

The premise guiding the company is simple: it plans to offer express passenger services along 300-550km corridors in the United States that are considered “too short to fly, too long to drive.”

“There are about 10 corridors in the US that we think are suitable for inter-city rail projects like ours,” Goddard says. “We think the top three are Acela in the northeast (the intercity passenger service operated by Amtrak), Virgin Trains USA connecting Miami and Orlando and eventually Tampa, and the third most intuitive is Southern California to Las Vegas.”

Passenger numbers on the Miami to West Palm Beach service currently operated by Virgin Trains USA grew 42% in the second quarter of 2018 compared with the first quarter, and increased by another 50% in the third quarter compared with the second quarter, although Virgin Trains USA’s base figures were not available. Following the completion of the West Palm Beach to Orlando section, the company expects to carry up to 6.6 million passengers annually along the entire Miami - Orlando route, with an additional 2.9 million passengers forecast on the Orlando - Tampa section.

In the financial results released for the first nine months of 2018, the company recorded $US 5.2m in operating revenue, including $US 4.7m from passengers and customers, but that was heavily offset by its operating expenses of $US 82m leaving it with a net loss of $US 87m after interest payments.

Goddard says it is normal for inter-city passenger services to experience a ramp-up period of around three years before reaching a mature ridership level. Acela, Eurostar and Italo averaged 29% of the mature level of ridership in the first year, 81% in the second year, and 86% in the third year before they stabilised, Virgin Trains USA says.

Estimates prepared by Louis Berger show that the full line could generate $US 810m in total revenue annually in its first stabilised year, either by the fourth quarter of 2023 or the first quarter of 2024. That includes $US 700m in ticket revenue and an additional $US 110m in revenue from other streams such as food and beverage, parking, naming rights, sponsorships and partnerships, merchandise, advertising and other fees.

“There’s never been a service like ours in south Florida, so there’s no comparison,” Goddard says. “When the Acela was introduced, it replaced a regional system that already existed so you had some sort of idea, and culturally people had an inkling of what train travel is all about.”

Instead, the company has been working to provide a service that is sufficiently comfortable, affordable and fast to entice passengers out of their cars and onto the train, at least just to experience it. So far this strategy is paying off, with market segments like business travellers and commuters growing steadily by 5% to 10% weekly.

“With commuters and business customers, you’re literally prying their white-knuckled hands off the steering wheel to get them on the train, and that kind of progress is very, very encouraging,” Goddard says.

Now that the service has been established in Florida, Virgin Trains USA is looking to take its business model further afield and on September 18 confirmed it had acquired XpressWest, a high-speed project with rights to develop a $US 3.6bn federally-approved corridor connecting Southern California with Las Vegas.

“We think that it is a long and unpleasant drive, and less than 10% of that market flies from Southern California to Vegas, so we think it’s an ideal opportunity to get people off the highway and onto a train, cut their travel time by we think 30-50% at probably the same cost as parking their car at a Vegas hotel for the weekend. It’s just one of those very intuitive markets and we think it’s one of the top markets, plus it’s already permitted.”

Virgin Trains USA is assessing whether any of those permits need to be updated, and expects to begin construction this year. It predicts a stabilised ridership of 11.3 million passengers annually, which will generate an estimated $US 863m in revenue per year.

Virgin Trains USA has also entered into a $US 150m agreement to purchase 15 hectares of land adjacent to the Las Vegas strip to construct its Las Vegas station and a mixed-use development, while it expects to build its Southern California station in Victorville, with future connections to the Metrolink commuter rail network serving the Los Angeles area.

While its focus is on offering a rail service, the wider business opportunities such as real estate development also play a large part in Virgin Trains USA’s business plan. The company is currently developing around 140,000m2 of mixed-use office, residential, retail and parking facilities at and around its stations in Miami, Fort Lauderdale and West Palm Beach. Food and beverage, fashion, fitness and life-style brands are already leasing or negotiating a lease for space near the stations.

Establishing the operation in Florida and demonstrating the business case has created a proof-of-concept, Goddard says, and shown that a balance can be struck that improves the journey time experienced by cars while avoiding a large outlay in cost needed to establish a full high-speed network. Goddard points to the California HSR project, which has experienced soaring costs and an extended timeline, as an example.

He says passengers are happy to settle for a service that will halve their journey time, instead of calling for significant reduction through high-speed services that may be years in the making.

“It would be nice to get from Los Angeles to Las Vegas in 30 minutes, but an hour and 20 minutes is still better than four hours in a car,” Goddard says. “I think there’s a very interesting paradigm that we’ve identified and acted on, that we think we can replicate around the country, and I don’t think anybody else is really thinking about it.

“You sacrifice a little bit of travel time to actually get the project done in three years. We built 70 miles [112km] here in three years. We believe LA - Vegas could be done in about three years. You could never do that in an elevated environment. I think there’s a big opportunity to improve inter-city mobility around the US and I think we’re at the leading edge of that.”

It is this innovative spirit that caught the attention of Virgin founder, Sir Richard Branson, who says he spent 10 years looking for a similar opportunity to change the passenger rail industry in America before visiting Edens in 2017.

“We transformed domestic air travel with Virgin America,” says Branson. “Tens of millions of Americans travel on the railways every day, and we have tried for over a decade to find an opportunity to provide them with that same excellent service experience. Virgin Trains USA is at the forefront of innovation in this market, and the ideal partner for Virgin to work with to alter perceptions and travelling habits across the United States.”

Time will tell whether Virgin Trains USA can capture the regular market share it will need to be viable, but how things turn out in 2019 will be a strong indicator as to whether private passenger rail can work in the United States.