Mark Carter considers the future of freight operator Aurizon following its purchase of One Rail Australia earlier this year. 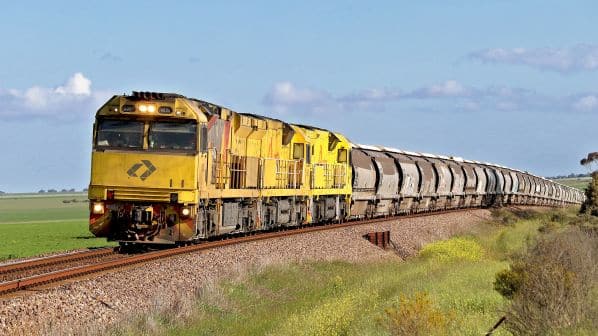 THE acquisition of One Rail Australia (ORA) for $A 2.35bn ($US 1.48bn) by fellow freight operator Aurizon, which was completed in July, is a remarkable reflection of the changes that the Australian rail freight industry has undergone since the 1990s. Reform of national competition policy introduced at that time began the move from public to private operators.

There is a certain irony in that ORA had its origins in the first major rail privatisation, when Australian National was sold by the federal government in 1997. Formerly QR National, the freight business of Queensland Rail, Aurizon was itself the last of the state-owned operators to be privatised in 2010. The sale also highlights the cycle of fragmentation and consolidation that has occurred within the industry over the last two decades.

Until 2016, the ORA business and its previous incarnations had been owned by US-based short line and regional operator Genesee & Wyoming Inc (GWI). In order to fund the 2016 acquisition of the above-rail haulage business of coal mining company Glencore, GWI entered into a partnership with the infrastructure arm of Australian banking group Macquarie and the Dutch pension fund PGGM. When GWI was sold to Brookfield in late 2019, the Australian business was excluded from the sale, with Macquarie and PGGM picking up the remaining half of ORA.

Surprisingly, little over a year later it was announced the ORA business was up for sale again. The reasons have never been fully explained to the markets, but speculation suggests that the European side of the Macquarie/PGGM partnership was nervous of the large carbon exposure resulting from the former Glencore haulage side of the business.

Moves towards a low-carbon future can also be seen as some of the reasoning behind Aurizon’s pursuit of ORA. In South Australia and the Northern Territory, ORA mainly undertakes bulk and intermodal haulage and owns some infrastructure, including the 2200km Tarcoola - Darwin line. The bulk side of the business hauls a variety of commodities including grain, gypsum, iron and copper ores, and other minerals.

“This part of the business has been integrated with the Aurizon Bulk business and is now known as Bulk Central,” Aurizon chairman, Mr Tim Poole, said at the company’s AGM in October. “As an integrated network and above-rail business, it provides highly-competitive rail services for customers across regions rich in resources and agricultural commodities.

“As well as these traditional markets, Aurizon remains well-positioned to take on emerging markets for future-facing commodities such as copper, lithium, nickel, and rare earth elements.”

Aurizon sees the purchase of ORA as transformative, providing a platform for future growth through greater exposure to new economy commodities. Data suggests that over 250 potential mineral project investigations are underway across South Australia and the Northern Territory. Poole told the AGM that Australia has the second-largest reserves of copper in the world, with two-thirds of this within South Australia. Global copper consumption is estimated to increase from 29 million tonnes per annum in 2020 to 56 million in 2050, primarily driven by the uptake of electric vehicles and supporting transmission infrastructure.

“Our aim is to double the size of the Bulk business by 2030 through organic growth and acquisitions, delivering a significant change in portfolio mix and continuing to increase non-coal revenues,” says Poole. With the purchase of ORA, the Bulk division is expected to increase its contribution to Aurizon’s total annual revenue from 33% to 41%.

ORA also undertook coal haulage in New South Wales and Queensland, now operated by Aurizon as a separate entity known as East Coast Rail (ECR). Despite long-term contracts with Glencore coal mines accounting for the majority of ECR business, under Australian competition rules this portion of the business was seen as a potential disruption to the sale of ORA. Aurizon realised this early in the process and made a commitment to the Australian Competition and Consumer Commission (ACCC) to divest this segment of the business as soon as possible following the acquisition.

Despite Aurizon committing to an enforceable undertaking, the ACCC needed to be satisfied that any new purchaser, or the demerged business, would be an effective, standalone, long-term competitor in the market for hauling coal and other bulk commodities.

“Aurizon remains well-positioned to take on emerging markets for future-facing commodities such as copper, lithium, nickel, and rare earth elements.”

This process delayed the sale by several months, somewhat surprisingly given that this side of the ORA business had no assets tied up in non-coal activities, with most of the assets dedicated to long-term haulage contracts.

“An important issue is whether the financial arrangements that Aurizon has proposed for the new entity, including its proposed debt levels, would affect the proposed demerged business’s ability to become an effective competitor,” said ACCC chair, Ms Gina Cass-Gottlieb, at the time.

Poole told Aurizon shareholders that the board had worked very closely with the management team on the transaction and that the “best pathway was the acquisition of the entire business and subsequent divestment of ECR.

“This enabled the purchase of the Bulk assets for a reasonable price and satisfied any competition concerns in relation to the coal haulage business,” Poole said. “We are working hard on the divestment of ECR, through either a trade sale or a demerger, and expect to announce the preferred pathway during November.”

Local media reports suggest that analysts are valuing the ECR business at around $A 1bn, slightly down on the $A 1.14bn paid for the assets in 2016 when sold by Glencore. Since then, ORA had added to the business with two new rakes of coal wagons in New South Wales, and a further two on the 1067mm-gauge network in Queensland.

Despite its planned divestment of the ECR coal business, Aurizon is still heavily reliant on coal for the foreseeable future, through its own established operations in New South Wales and Queensland. In the 2021-22 financial year Aurizon hauled a total of 194 million tonnes of coal, 4% down on the previous year but with revenue 1% higher.

Poole told the AGM that Aurizon’s strategic aim is to maximise the respective strengths of its three business units - Coal, Network and Bulk - to deliver profits and growth opportunities for the company. “The Aurizon Coal and Network businesses are stable, resilient and generate strong cash flows,” Poole said. “They are underpinned by the demand fundamentals of high-quality Australian metallurgical and thermal coal. Our strategy is to ensure these businesses remain highly efficient and resilient as markets change.”

Metallurgical coal remains vital for making steel, and Aurizon believes that steel will be essential as the world seeks to reduce carbon emissions, as it plays an important role in renewable electricity generation, notably in the infrastructure required for solar and wind power.

Australia is the world’s largest exporter of metallurgical coal. This commodity accounts for around two-thirds of the volume hauled on the Central Queensland Coal Network, and around half the volume hauled by Aurizon. “Indeed, if thermal coal exports from Australia ceased tomorrow, the returns from our regulated Network (below rail) business would continue based on the metallurgical coal volumes,” Poole said.

While it is recognised that global thermal coal consumption will reduce in the decades ahead, demand for Australian coal is dependent on the traded market which is currently around one billion tonnes per annum, Asia representing around 85% of that market.

Meanwhile, Aurizon is trialling a number of strategies to reduce its carbon footprint. It has introduced a Fleet Decarbonisation Programme, saying it has made good progress in the past year towards conducting operating trials of a battery-powered heavy haul locomotive. The aim is to design, develop and test a homegrown prototype, specifically suited to Australian conditions.

Aurizon is also working with mining company Anglo American to assess the introduction of hydrogen-powered traction for heavy-haul freight. Anglo American has developed a hydrogen-fuelled engine to replace diesel engines across its fleet.

On the Aurizon Network’s Central Queensland Coal system, under an agreement with CleanCo Queensland, 25% of electricity supplied for traction will be sourced from CleanCo’s low-emissions portfolio, including large-scale solar and wind generation projects.

Aurizon appears to have a tricky path ahead. It needs to balance the need to provide returns for its shareholders, still largely dependent on coal haulage, with attempts to transition to a greener low-carbon future that is less dependent on that segment of its business.

The purchase of ORA will go some way to achieving that transition, but many of the projects highlighted by Aurizon remain at the exploratory stage, and it may be that the transition becomes a longer-term goal than initially hoped for.