Metro construction is picking up momentum in India as rapid urbanisation fuels the growth of megacities. Oscar Sinclair examines the investment landscape with the aid of data from IRJ Pro. 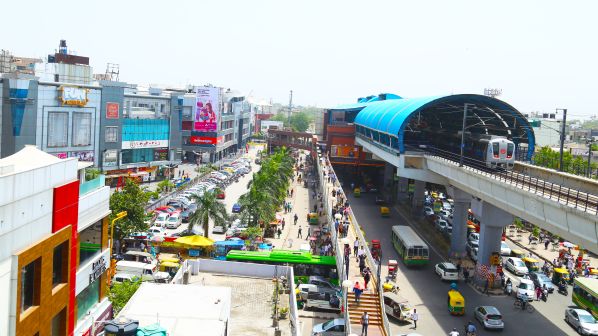 In less than 16 years Delhi has built a 296km metro network with a further 84km under construction and 111km planned. Photo: DMRC

WITH India’s population passing 1.35 billion earlier this year, the country is on track to become the home of 1.44 billion people by 2024 and surpass China as the most populous nation on the planet.

India’s population growth rate is twice that of China (1.2%) and the population is forecast to continue growing until 2062.

This growing population is lending itself to another key demographic trend: urbanisation. An estimated 33.6% of India’s current population, or 450 million people, are living in urban areas, and this is expected to nearly double to 866 million by 2050.

As populations swell, India’s urban infrastructure is under pressure and vast investment is required to deliver the changes needed to keep people moving.

While China and other countries have forged ahead with metro development in their major cities, India has lagged behind. Early investment was inconsistent with the first system opening in Kolkata following 12 years of construction in 1984 and the second in Delhi not launching until 2002.

However, since then there has been strong growth in planning and construction with eight new systems opening in the last five years.

As of September, India has 507km of operational metro lines serving 381 stations across 10 cities. According to IRJ Pro more than 500km of new lines are currently under construction, with India’s network set to double over the coming years. Older metro lines in India use broad gauge, such as in Delhi and Kolkata. However, newer projects are built to standard gauge.

At 296km, the Delhi metro network dwarfs’ other systems in India and accounts for more than half the total metro trackage in the country. It has a daily ridership of 2.2 million and operates profitably without government subsidies. The system is currently the ninth biggest network in the world, ahead of the Madrid metro at 288km. Delhi has a further 84km of lines under construction with an additional 111km planned. When completed, this could make the network the third-largest in the world at 491km.

The latest member of India’s metro club is Hyderabad, which opened its first line in November 2017. The city currently has 46.6km of lines operational and a further 193km planned or under construction.

Delhi’s metro has been a huge success, and metro projects have been placed high on the Indian government’s development agenda. Metros are not only seen as a core solution to urban mobility demands but also as a means of transforming cities in accordance with the vision of prime minister, Mr Narendra Modi. The government has allocated $US 2.21bn for metro projects in its 2018-19 budget.

India’s 2006 National Transport Policy first proposed that every city with a population of more than 2 million would have a metro system. In August 2014, the government announced financial assistance would be provided for metro projects in cities with more than 1 million residents. In May 2015, the Urban Developments Ministry’s proposal to build metros in 50 cities was approved by the government. In August 2017, the cabinet approved a new Metro Rail Policy with the aim of stimulating metro expansion across India. The new policy can be broken down into nine components:

The New Policies PPP model aims to lessen the burden on central government funding for metro projects. However, this is not the first time PPP models have been tried in India. The model was first attempted on the Delhi metro airport line but proved unsuccessful, after Reliance Infrastructure abandoned the effort due to the huge losses incurred. Both Mumbai Metro Line 1 and Hyderabad metro have used the PPP model with the use of Viability Gap Funding (VGF) from the Indian government.

There are issues associated with PPP in metro projects in India such as commercial viability and procurement of land. Metro projects are also highly capital-intensive and private players look for returns of around 12-15%, yet metro projects typically yield under 3%. India’s ‘metro man’ Mr E Sreedharan, the former head of DMRC, and now advisor to projects in many cities, is a critic of the policy. “It will never work.” he says. “Nobody will come forward for the construction of metro rail as it has never been a profitable investment.” Metro projects are long-haul investments and can take a long time to break-even.

Revenue collection is typically unpredictable for public transport projects and this has already been a challenge in India. The Delhi airport line financing model failed because of unstable revenues. With a financial rate of return below the market rate for private funds, public support is required to make the investment more attractive.

The acquisition of property for metro projects is controlled by state governments. Private acquisition can be difficult with lengthy procedures, while also accounting for social considerations. It took Reliance Infrastructure nearly seven years to complete Mumbai Metro Line 1, a relatively simple elevated line, principally due to a delay in the receipt of unencumbered land from the Mumbai Metropolitan Region Development Authority (MMRDA).

This highlights another obstacle for PPP projects in India: political and bureaucratic constraints. Fragmented decision making due to the multitude of public agencies involved in the process, emphasis of administrative procedures and lengthy tendering processes can often be a barrier to private investment.

It was announced in October this year that construction on the country’s first metro project to be developed under the new PPP model - Pune Line 3 - would commence in 2019. The contract was won by a consortium of Tata Realty & Infrastructure and Siemens Project Ventures with completion scheduled for 2022. The 23.3km line is elevated and will serve 23 stations.

While the merits of the new policy have been questioned, it can be seen as a step forward in finding the correct balance for metro developments in Indian cities. One of the main benefits is the establishment of a Unified Metropolitan Authority (UMA). There has been a strong need for a UMA as previously metro system’s operated under their own separate organisation. Prior to the new policy, there has been little integration between departments, leading to a lack of collaboration. Overall city mobility will now be considered in the planning of new projects. The new policy proposes that every city should have a UMA for the development of integrated transport.

Improved last mile connectivity will benefit metro systems. Previously metro projects were primarily concerned with transporting passengers from platform-to-platform and without concern for the catchment area around stations. However, for around 5% of the overall project cost, it is possible to implement high-quality feeder services which in turn will increase the overall profitability of the project.

Alternative analysis methods are also likely to bring benefits to a city’s transport infrastructure. Typically, in India technical studies have been conducted after the transport solution has been decided in order to validate the choice. Metro systems in Jaipur, Chennai and Kochi experience low ridership levels at 2000 people per kilometre. This is one third of the ridership level seen on iBus (BRT) services in Indore which has roughly 6000 passengers per kilometre and operates at about one 10th of the cost of a metro system. This highlights the need for alternative analysis when selecting transport systems.

As India’s urban population grows at a fast pace, metros will be a fundamental component of transport infrastructure. Metros offer benefits from enhanced mobility to low carbon footprints, which cannot be purely measured through the yardstick of return on investment.

However, metros must not be seen as the only solution to India’s growth pains. Although symbolic of development, metros need to integrate with the broader transport infrastructure. And despite its issues, the new policy is a step in the right direction for India’s growing urban population.

To gain access to data for over 2200 global projects and over 1400 fleet orders, subscribe to IRJ Pro.