With hydrogen gaining traction around the world, Richard Clinnick examines where the new technology is being implemented. 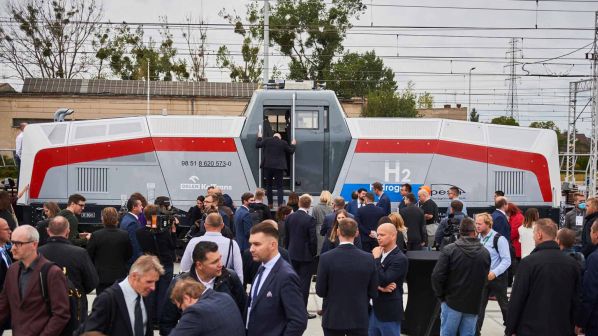 GERMANY pioneered the use of hydrogen for passenger trains in Europe and remains the most advanced with the technology.

Following the initial two pilot trains, Alstom agreed to supply 14 hydrogen trains for the Buxtehude - Bremervörde - Bremerhaven - Cuxhaven line in November 2017, with delivery set to commence by the end of the year and operation beginning in early 2022. The region’s existing mobile hydrogen filling station will be replaced by a stationary installation at Bremervörde, which with capacity for 1600kg per day will be the world’s largest hydrogen refuelling station.

A further 27 iLints have been ordered by Rhine Main Transport Authority (RMV) for delivery by the end of next year. These will replace DMUs on lines around Frankfurt. In May, German Rail (DB) confirmed plans to issue a tender for 16 hydrogen electric multiple units (HEMUs) for a prospective contract to operate the Line Star Network centred on Mühldorf, Bavaria.

DB also plans to begin trials with a Siemens Mireo H hydrogen-powered train from 2024. Work is already underway in Ulm to convert maintenance facilities to service the HEMUs. A two-car Mireo H will have a 600km range, while a three-car train would have a 1000km range.

In March the German government announced a €74m, three-year programme of grants to cover between 40% and 60% of the additional cost of low-emission rail traction compared with diesel trains. In March 2020, an Alstom German iLint train was trialled on the 65km Groningen - Leeuwarden line in the north of the Netherlands. Demonstrations of iLint have also taken place in Sweden while in Austria a 10-week trial took place using a two-car train. The train was approved by the Austrian Federal Ministry for Climate Protection, Environment, Energy, Mobility, Innovation and Technology (BMK), becoming the second European country to approve the train after Germany.

French National Railways (SNCF) has ordered 12 Coradia Polyvalent electro-hydrogen dual-mode multiple units on behalf of four regions. The e190m contract serves the country’s hydrogen plan launched back in 2018. The four-car, 72m-long trains have capacity for 218 passengers and will run for up to 600km on non-electrified lines. The first order is for the Auvergne - Rhône - Alpes region.

These trains will be able to operate on either 1.5kV dc or 25kV ac. Testing is due to begin in 2024 on the 19km non-electrified Auxerre - Laroche - Migennes line. A further three trains will be used on the Montréjeau - Luchon line in the Occitanie region which is due to reopen by 2025.

In Italy, North Milan Railway (FNM) has ordered six hydrogen trains from Alstom, the country’s first, with an option for a further eight. The first is due to be delivered in 2023. They will use the same fuel cell propulsion as the iLints in use in Germany with Alstom claiming performance will match that of DMUs.

Pesa also unveiled a rebuilt locomotive, powered by hydrogen which will be used at the new Plock oil refinery in Poland. It has two hydrogen fuel cells manufactured by Ballard, and its hydrogen tanks have a 175kg capacity.

In the United States, Chevron and Caterpillar confirmed a plan last month to collaborate on a demonstration locomotive powered by hydrogen. The companies are seeking to explore if hydrogen is suitable for future heavy-haul operation.

Canadian Pacific (CP) said in March that it will use fuel cell modules from Ballard Power Systems, Canada, for its first hydrogen fuel cell (HFC) linehaul freight locomotive. CP plans to retrofit an existing locomotive by replacing its diesel prime mover and traction alternator with HFC and battery technology that could power its electric traction motors. Six 200kW fuel cell modules are being delivered to CP which will provide 1.2MW of electricity to power the locomotive.
At the end of 2020, the Canadian government released its hydrogen strategy which included the potential of hydrogen-electric trains, in particular for heavy-haul, long-distance freight as well as passenger services such as Ontario’s GO Transit network.

A long-time proponent of LNG as an alternative fuel source for locomotives, Russian Railways (RZD) signed a protocol with local governments and suppliers declaring the Sakhalin hydrogen railway project feasible last month. Under the scheme, Transmashholding (TMH) will build a fleet of seven hydrogen trains, while Rosatom is developing facilities for production and supply of hydrogen fuel and refuelling infrastructure at stations on the island in Russia’s far east. Work is also underway on a second pilot in the Moscow region.

In May, RZD and SNCF signed a roadmap for the use of trains powered by hydrogen fuel cells and the development of the systems needed to support operation. The three-year agreement covers safety, design, maintenance and certification of both passenger and freight rolling stock. It also envisages cooperation on other types of traction that will reduce the use of diesel fuel.

China is also considering hydrogen to reduce pollution from its urban rail vehicles. In March 2015, the first hydrogen LRV was launched in Foshan where a 6.5km test line is in service. Two years later more LRVs were ordered.

In Korea, Korean Railroad Research Institute (KRRI) is working to develop what it claims is the first liquefied hydrogen-based traction system in the world. Work began in January and will run until December 2024. The aim is to develop a 2.7MW module-based fuel cell propulsion system based on liquefied hydrogen. The pressure of this hydrogen is much lower than 700bar gaseous hydrogen used in existing operations, and KRRI claims it’s seven-times more economical and could reduce fuelling times by 20%. KRRI believes this could support 150km/h operation, and a range of 1000km. The aim is to trial it on an LRV in the second half of 2022.

In addition, last month the Korean government announced it would invest Won 42.4bn ($US 35.9m) to adapt hydrogen fuel cells used in Hyundai Motor’s Nexus SUV to develop 380kW fuel cells for hydrogen trams. The programme will run up to 2023.

Ulsan and Hyundai Rotem have signed a Memorandum of Understanding (MoU) to produce Korea’s first hydrogen-powered LRV. This will initially be tested on a disused 4.6km line serving Ulsan port.

East Japan Railway (JR East), Hitachi and Toyota have signed a collaboration agreement to develop a prototype rail vehicle using hydrogen-electric. The Hybari will use fuel cells developed by Toyota for its hydrogen-fuelled Mirai cars and Sora buses. Hitachi has developed the hybrid-drive system and testing of a converted two-car EMU is expected to begin on the 4.1km Shitte - Hama - Kawasaki Nambu Line in March 2022. The train will operate at 100km/h with a 140km range.