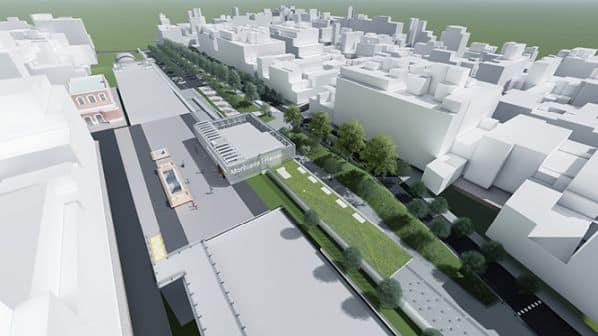 A simulation of the plans to move railway tracks and the station at Montcada i Reixac underground.
Photo Credit: Adif

SPANISH infrastructure manager Adif has retendered the civil works contract for the section of the Barcelona - Granollers - Girona route which will be relocated underground where it passes through Barcelona’s Montcada i Reixac district.

The contract has a budget of €621m and aims to better integrate the railway within the urban fabric, as well as removing two level crossings used by large numbers of road vehicles and pedestrians to improve safety.

Montcada i Reixac is on Spanish national operator Renfe's suburban route R2 running from Castelldefels and Barcelona Airport to Granollers Centre and Maçanet-Massanes via Sants and Passeig de Gràcia in the centre of Barcelona, and also the R11 route from Barcelona to the French border.

The project will involve construction of a three-track tunnel around 4km in length. The tunnel will begin in the Can Sant Joan district and before starting its descent through a structure made up of concrete screens. The next part of the tunnel section will be built using conventional excavation methods and will reach a depth of 35m, while the section through the most built-up part of Montcada i Reixac will comprise concrete screen walls and a roof slab.

The new underground station will be close to the location of the current facility and from there the tunnel will be bored under the Ripoll river and the C-33 motorway. The new alignment will be designed for a maximum speed of 140km/h and a maximum gradient of 3%.

The new Montcada i Reixac station will have two platforms and a central track to allow regional trains to pass through without needing to stop. The new station building will have two entrances, one from Carrer Guadiana and another from a new promenade which will be created on the slab covering the new railway tunnel. Skylights will allow natural light to enter the building, while at night the artificial light of the station with pass through the skylights to provide lighting for the surrounding environment, helping to meet sustainability goals.

The contract, which is still subject to approval by the Spanish cabinet, has been retendered following an appeal in March by the National Construction Federation (CNC) against particular clauses of the original tender, a matter resolved in June by the Central Administrative Court of Contractual Appeals (TACRC). The new tender contains revised prices for the most significant raw materials involved in the project.