A virtual inauguration attended by the president of Afghanistan, Mr Ashraf Ghani, and Turkmenistan’s president, Mr Gurbanguly Berdimuhamedov, was held to mark the opening of a 24km 1520mm-gauge line between the town of Aqina, on the Afghan border with Turkmenistan, and the northern Afghan town of Andkhoy on January 14. 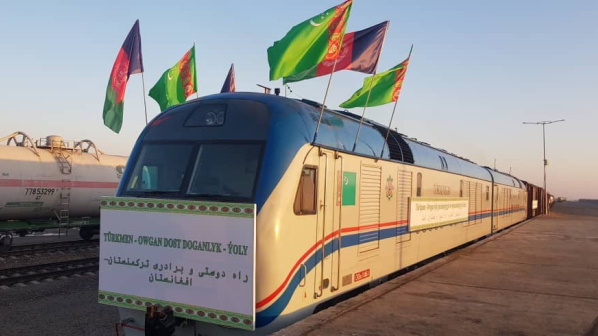 Photo Credit: Office of the President of Afghanistan

The section, which includes 6km of sidings at Andkhoy, is an extension of the 88km line which runs from Atamyrat to the Ymamnazar border crossing point and Aqina, which opened in November 2016.

The extension was constructed following the signing of a memorandum of understanding (MoU) between the governments of Afghanistan and Turkmenistan in February 21 2019, with a formal government-to-government contract following in September of that year.

Funding, surveying, design and construction of the extension was carried out by Turkmenistan due to Afghanistan’s lack of domestic rail capabilities.

Construction began in July 2019, when expanded rail facilities at Aqina were inaugurated.

The extension, which was opened alongside new cross-border electricity and fibre optic connections, is intended to solidify relations between the two countries and improve regional connectivity. The line is also expected to provide a boost to the Afghan economy, which has suffered in recent decades.

Berdimuhamedov also announced plans by the two countries to construct a 173km line from Towraghondi to Herat.

“Afghanistan’s location as a roundabout that links Central Asia with south, east and west Asia as well as implementation of significant economic and infrastructural projects, including recently the Khawf - Herat railway, proves that our vision of connectivity is not an improbable dream but an undeniable reality,” says Ghani.

The first three sections of the 140km, 1435mm-gauge Khawf - Herat cross-border line, which connects Iran and Afghanistan, opened on December 10. Freight trains can now travel between Khawf, Iran, and Rozanak, Afghanistan, with additional freight and passenger services planned according to demand. The final section, between Rozanak and Herat, is currently under consideration by the Afghan government.