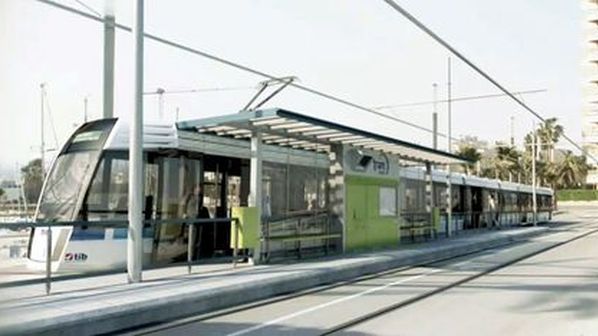 A publicity image promoting the concept of the Majorca Trambadia with a graphic design mock-up of how a tram might look on the line when it is completed.
Photo Credit: gayarre.eu

SPAIN’s minister of transport, mobility and urban agenda, Ms Raquel Sánchez, has signed an agreement with president of the Balearic Islands, Ms Francina Armengol, to build the first section of a new light rail line along Majorca’s Bay of Palma between the island capital’s Plaza de España and the airport.

The Ministry of Transport (Mitma) has agreed to finance 100% of the cost of Section 1 of the new line, which will be branded as “Trambadía,” from 2023 within the framework of the Spanish government's strategy to promote the decarbonisation of mobility and transport infrastructure. The project was awarded €20m in the 2023 General State Budget in October.

At that stage Balearic minister of finance, Ms Rosario Sanchez, also announced that the project would require a total investment of €185m, an agreement for which had not at that stage been formally signed as Madrid was still negotiating to secure funding from the European Union’s Next Generation Funds.

Section 1 of the new LRT route will run for 10.8km southeast with 16 stops along the coast between the centre of Palma and the island’s airport. Majorca residents and its annual influx of millions of holidaymakers rely on buses, taxis or rental cars to travel to and from the city, leading to heavy congestion and pollution on the road network during summer.

When completed, the Trambadía could meet an estimated 27% of the demand for public transport, carrying 5.3 million passengers initially with this increasing to 6.5 million in 10 years. This will help to shift the modal share of people using public transport to and from the airport to 60%. In 2019 almost 30 million passengers used the airport, reinforcing the need for new infrastructure to improve its operations and sustainability.

Section 1 of Trambadía will also provide a rail connection with Son Espases Hospital, which receives an average of 15,000 people every day.

Future plans for the light rail line include an extension from the hospital to s'Arenal de Llucmajor, passing through Can Pastilla and the popular beach resorts at Ballermann.

“Five months ago I made a commitment to president Armengol that the government of Spain would finance the first section of the Palma tram and today we signed the protocol to formalise that commitment,” transport minister Raquel Sánchez said after signing the latest agreement. “This is great news, because the tram represents a key infrastructure in the Sectoral Master Plan for Mobility in the Balearic Islands, whose objective is to transform urban mobility and public transport in this city.

“The tram will help boost one of the island's economic engines, such as the Sont San Joan airport; It will fulfill an important social function by improving and facilitating access to an essential service for citizens, such as health care, and it will be of great value as a vehicle for connectivity in the city with a stop 300m from the Palacio de Congresos.”

The Balearic government has actively been promoting the project, with three possible routes explored. Estimates of when the first section will open vary from 2026 to 2027.