ALUMINIUM contact wires were installed through the Severn Tunnel to combat the corrosion that delayed the project by three years, the first time the system has been used in Britain, infrastructure manager Network Rail (NR) has revealed. 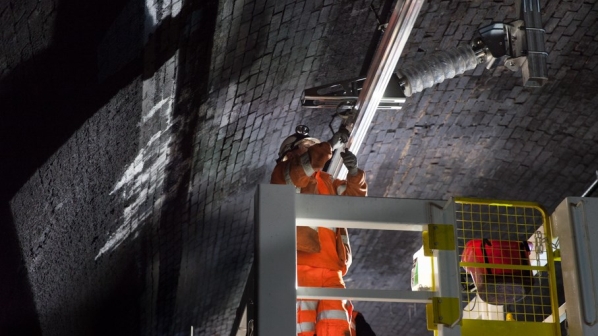 The system was initially installed in 2016.

Electrification of the 134-year-old, 6.4km tunnel, which runs 60m beneath the Severn Estuary, was launched as part of the Great Western electrification programme in June 2010.

NR special projects manager, Dr Dave Hewings, says a number of systems were considered for the tunnel, before an overhead rigid conductor rail system developed by Furrer and Frey, Switzerland, was selected. The system has already been used in a number of major tunnels in Europe, including the Gotthard Base Tunnel and the Ceneri Base Tunnel in Switzerland, as well as other instances in Britain.

The 25kV ac system, which uses 1400 aluminium structures bolted to the tunnel roof to carry an aluminium rail that holds a copper contact wire, was installed during a six-week closure of the tunnel in 2016. However, an inspection of the system a year later revealed that accelerated corrosion was occurring

The tunnel is unique due to its age and location, that is open to an estuary environment. Around 63 million litres of water are pumped out of the tunnel by the Sudbrook pumping station daily to prevent flooding. The tunnel also features numerous shafts and connections, which further complicate the environment.

“There were always known challenges in Severn Tunnel, in terms of metal work and corrosion, but it was developed with the same approach that was used in other tunnels,” Hewings says. “One of the challenges with any overhead line system is that of dissimilar metals and the prospect of electrolytic corrosion, where two similar metals come together in a conductive environment which causes damage of one from the other.

“It hasn’t been a problem with any of the installations in the other systems. But it appeared that the particular environment of Severn Tunnel, clearly linked to the salt air and the damp environment, contributed to accelerated corrosion.”

Hewings says this raised two prospects: removing the system entirely, or removing the dissimilar metals. As the first option was “extremely prohibitive” in terms of cost, it was decided to pursue the second option of using aluminium contact wire for the first time in Britain.

NR required approval from the operator to install the new wire. British regulations also specify copper for overhead wire, with NR working with the Department for Transport to gain approval for the system.

Working over a year to an accelerated timeframe, a system was developed and tested in Italy, before being installed through the tunnel during a three-week closure in mid-2018. The system has since proved successful, with services now able to operate under electric power direct from London to Cardiff.

This follows the electrification of the Welsh portion of the Great Western Main Line in January, with services switching to diesel for the Severn tunnel over the past six months.