The terminal in Tucumán region in the west of the country requires the construction of 14km of track to connect with the mainline network. 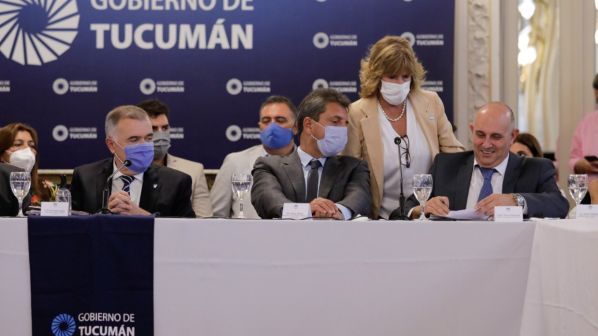 The funding was announced during a visit to San Miguel de Tucumán.

ARGENTINA’s president of the chamber of deputies, Mr Sergio Massa, chief of cabinet, Mr Juan Manzur, and minister of transport, Mr Alexis Guerrera, have announced a Pesos 8.8bn ($US 81m) investment in transport in the Tucumán region, including the construction of a multimodal freight terminal in San Miguel de Tucumán.

The terminal, to be located in Cevil Pozo to the east of the city, will connect the railway with road freight and the adjacent Teniente Benjamin Matienzo International Airport. State-owned railway Argentinian Trains will begin preliminary civil works on the site within the next 60 days, and will build around 14km of track to connect the terminal with the mainline network. The site will have around 26,000m² of warehouse space to store goods. Construction is expected to take a year-and-a-half and create 300 jobs.

The Cevil Pozo site is located at the junction between two rail lines and the 302 and 303 highways, and near the national route 9 highway. The site will also reduce the amount of freight travelling through San Miguel de Tucumán, increasing safety.

“We are thinking of three large logistics nodes in the Norte Grande region: one here in Tucumán, another in Salta Güemes and another in Recreo Catamarca,” Guerrera says. “What do we do in these logistics nodes? We bring together the different modes of transport. Why? To be more efficient and reduce logistics costs, which is one of Argentina's biggest problems.

“Many times moving a product within our own country is more expensive than from an Argentine port to a port in Europe. That is why we are carrying out essential works so that this logistic node of Cevil Pozo can count on the railway, land and air connection in the future.”

For detailed data on rail projects in Argentina and around the world, subscribe to IRJ Pro.