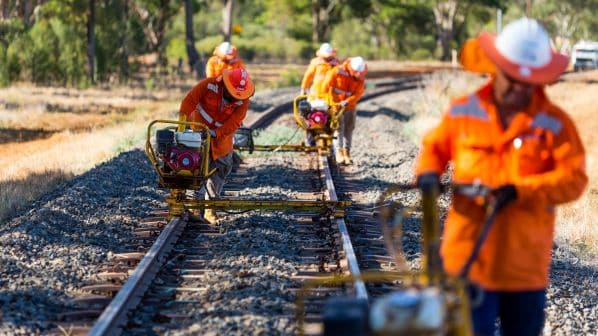 Rail infrastructure projects in Australia may have to be delayed due to pressures on construction industry capacity, labour shortages and materials costs.
Photo Credit: IRJ

LABOUR shortages, increasing material prices and a construction industry that is at capacity may force Australia to postpone some large-scale transport projects, Infrastructure Australia has warned.

Infrastructure Australia, the independent statutory body advising the federal government on infrastructure, said more of the large transport projects planned across the country would suffer delays and cost overruns after the value of national construction work grew by $A 15bn ($US 10bn) over the past 12 months.

The infrastructure body said in its Infrastructure Market Capacity Report that it was “no longer a question of if a project will slip, but more likely when, by how long and at what cost,” owing to a combination of pressures.

The New South Wales (NSW) state government delayed several multibillion-dollar transport projects earlier this year as industry headwinds hit. But the Victoria state government has not announced any changes to its annual $A 21bn pipeline of work.

Credit rating agency S&P Global estimated in June that Victoria can build only 80-90% of the projects it has planned for the next four years because of a lack of capacity in the construction industry.

A severe labour shortage was having the biggest impact on industry capacity, he said. Governments competing for construction resources would need to take a “good, hard look” at how much of their project pipeline they could actually build.

Major public infrastructure projects valued at $A 237bn are planned across the country over the next five years – up from $A 15bn over the past 12 months – with 84% in Victoria, NSW and Queensland. Transport projects account for 63% of the budget and were “definitely the hardest hit” by the growing headwinds, Copp said.

The report estimates national labour demand to surge by 42,000 workers to a peak of 442,000 next year – more than double the projected available supply. Wages on public infrastructure contracts have grown by an average of 17% over the past 12 months, while construction material costs have surged by 24%.