Heavy flooding has washed away the railway in New South Wales. 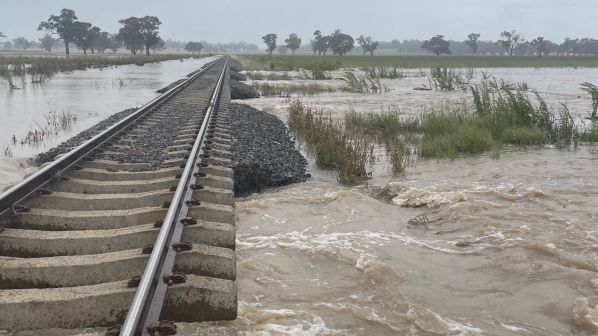 FOR the second time this year, heavy rainfall across large parts of Australia has caused major disruption to rail services on the strategic East-West corridor linking the eastern states with Perth in Western Australia.

Towards the end of October, rising floodwaters from upstream catchments in western New South Wales (NSW), especially that of the Lachlan River, have resulted in a number of washouts on the railway between Parkes and Euabalong.

Water levels have also risen well above the top of the rails in many places.

Initial plans to divert some services via Melbourne and Adelaide were thwarted when a few days later the main Sydney - Melbourne route was severed for five days due to a number of washouts between Goulburn and Cootamundra.

Major operators on the Sydney - Melbourne corridor had planned a number of measures to divert some key services via Melbourne including relocating crews, diverting consignments where capacity is available on other services, and moving freight by road to Melbourne and Adelaide for onward shipment by rail.

The Adelaide - Sydney and return legs of the weekly transcontinental Indian Pacific passenger service were also rescheduled to operate via Adelaide and Melbourne, terminating at Goulburn with road connections to Sydney.

However, these plans were disrupted on November 14 when an SCT Logistics Perth - Melbourne service suffered a serious derailment at Inverleigh in Victoria when a culvert, affected by recent heavy rain, collapsed as the train passed over it.

This is expected to close the route via Melbourne and Adelaide for up to a week.

Floodwater in NSW has yet to recede, and the latest reports suggest large sections of track have been washed away west of Parkes, with access for a full assessment of the damage unlikely to be possible before the end of this year.

Speaking at a rail industry conference just prior to these line closures, Pacific National’s chief operating officer, Mr Patrick O’Donnell, repeated calls he made earlier this year for greater resilience to be built into Australia’s rail freight network.

“This was keenly felt in the first half of this year when we saw major disruptions and closures to rail freight networks due to inclement weather," O'Donnell said. "After decades of government underfunding, many sections of our interstate and regional railways were shown to be lacking resilience.