Services are not expected to resume before the end of the month. 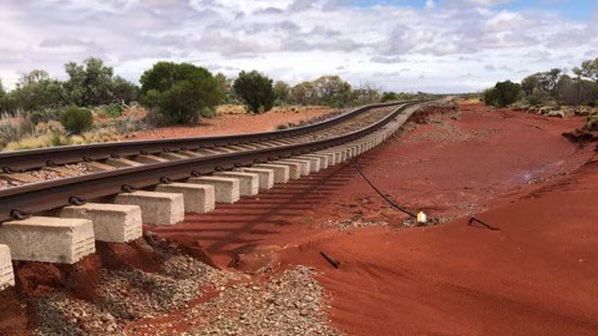 TRANSCONTINENTAL rail freight services from Australia’s eastern states to Western Australia and the Northern Territory have been severely disrupted by heavy rainfall in the South Australian outback, which has cut the main Australian Rail Track Corporation (ARTC) rail corridor in several places.

All east-west freight services to and from Perth have been suspended since January 21, and ARTC said on January 26 the line was unlikely to reopen for another 12 days. Intermodal and iron-ore trains on the line to Darwin have also stopped as they use the ARTC line between Port Augusta and Tarcoola.

Initially, eight sites over 78km of track running west from Coondambo, 300km northeast of Port Augusta, to the remote crossing loop at Lyons, were impacted. Damage included minor washouts, ballast scouring and water over the tracks. Access to the damaged sites was only possible by rail due to many roads also being flooded.

While summer storms are not unusual in outback areas, the strong weather system brought more than double the levels of rainfall in previous 24-hour records.

The line was initially expected to be reopened by January 26, with work to restore the track successfully completed. However, further heavy rainfall as the weather system moved east resulted in further damage to the ARTC line from the McLeay crossing loop, 125km north of Port Augusta, through to Coondambo.

ARTC has not been able to fully access this section due to the condition of the track and supporting roads, resorting to aerial surveillance to identify the extent of the damage. Equipment sourced from local councils and mining sites as well as from other states is assisting track repairs.

“Meteorologists have described the rainfall as a once in 100/200-year event,” an ARTC spokesperson says. “Because of extensive weather event, that included over 200mm of rain in 24 hours in some areas, services from Adelaide to Perth and Darwin continue to be impacted. Repair works are underway where possible, however additional damage has been identified following our initial inspections. Up to eight affected locations are inaccessible due to the flood waters.”

Pacific National’s chief operating officer, Mr Pat O'Donnell, told ABC News that relying on road and sea freight would not satisfy demand while the railway remains out of service. He called for government funding to upgrade “this vital piece of infrastructure.”

“Pacific National alone undertakes approximately 50 return services each week between Adelaide and Perth,” he says. “More resilience needs to be built into the existing rail line. I can’t imagine commuters or truckies accepting major highways being closed for up to a week.”

The Ghan and Indian Pacific passenger services to Darwin and Perth respectively have not been impacted, as the former is not due to resume until February following its summer layoff. The latter is currently suspended due to the pandemic.

A feature in the December issue of IRJ highlighted the importance of the East West rail corridor in alleviating various logistics challenges brought about by the pandemic.