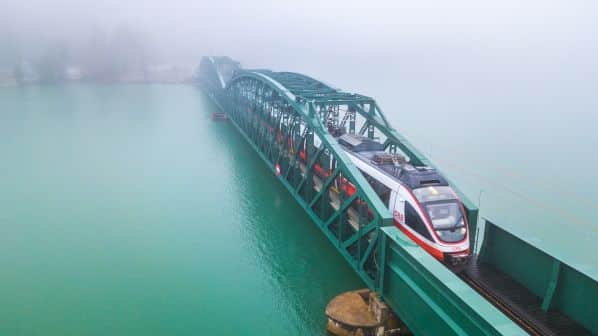 FOLLOWING completion of the €50m, one-and-a-half year project to modernise and electrify Austria’s Rosentalbahn between Klagenfurt and Weizelsdorf, passengers services were reintroduced on the 12.1km line at the December 11 timetable change.

Austrian Federal Railways (ÖBB) says electrification of the line, which is Line S3 of the Kärnten S-Bahn network, will save annual CO₂ emissions equal to the amount that a 75ha forest would absorb.

As well as electrification, modernisation has seen the station platforms at Klagenfurt-Sud and Weizelsdorf lengthened from 60m to 160m, and construction of a new station at Köttmannsdorf Lambichl with a park and ride facility for 23 cars together with a bike and ride facility for 30 bicycles. In addition, Maria Rain station has been adapted to include the same number of bike and ride spaces as well as park and ride spaces for 30 vehicles.

Also given a thorough renovation was the 167m-long Hollenburg bridge over the River Drau, which was both modified to carry catenary masts and had its corrosion protection renewed. A total of 12 level crossings on the route were either upgraded or removed.

Before the start of public services, completion of the electrification project was celebrated with a special journey on December 7 taking representatives of the state authority for Carinthia and the municipalities along the route.

"I am very pleased to be able to present a major, further step towards a new ‘green’ railway era in the region at this event today,” said ÖBB Infrastructure board member, Ms Judith Engel. “We see ourselves as a modern mobility provider - safe, convenient and of course environmentally-friendly. The expansion of the rail infrastructure in Carinthia is progressing: we will invest €1.2bn in Carinthia by 2028."

“Climate protection and public transport are inextricably linked. That is why we will be investing more in public transport in the coming years,” said Carinthia provincial governor, Mr Peter Kaiser. “These investments in the infrastructure are direct investments in climate and environmental protection, in Carinthia as a business, working and living location for the benefit of future generations.”