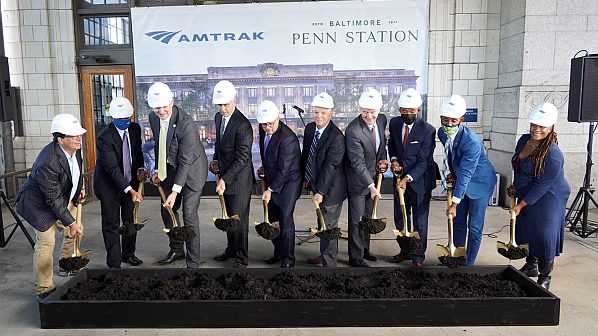 AMTRAK and Penn Station Partners (PSP) held a ground-breaking ceremony on October 22 to mark the beginning of a $US 150m redevelopment and expansion of Baltimore Penn station on the Northeast Corridor in Maryland.

Amtrak agreed a Master Development Agreement with PSP in 2019. Planning and development due diligence had been ongoing since January 2018 after Amtrak selected PSP, led by Beatty Development Group and Cross Street Partners, as master developer.

The station improvements include the full preservation of the station, which was built 110 years ago. There will also be platform improvements to accommodate the new Acela high-speed trains which are due to enter operation from next year. A low-level platform is being rebuilt to make it a fully compliant high-level platform for passengers with reduced mobility, while a new platform will also be built at the station. Construction of the new platform has already begun while the building façade renovation will start later this year. Expansion of the station onto the Amtrak-owned Lanvale site is expected to commence in spring 2022.

The Baltimore Penn station project will complement work to renew overhead power lines and upgrade 48.2km of track between Baltimore and Washington Union station that will enable trains to operate at higher speeds.

The station’s last major renovation was completed in 1984 as part of the Northeast Corridor Improvement Project. More than 3 million Amtrak and Maryland Area Regional Commuter (MARC) passengers used the station per year before the Covid-19 pandemic.

“This construction will serve as the catalyst to transform surrounding vacant land already owned by Amtrak into a mixed-use, transit-oriented development with up to 90,000m2 of new office, retail and residential space,” says Amtrak CEO, Mr Bill Flynn.