ERTMS launch delayed as not enough trains are equipped while report reveals that 26% of infrastructure requires renewal within 12 years. 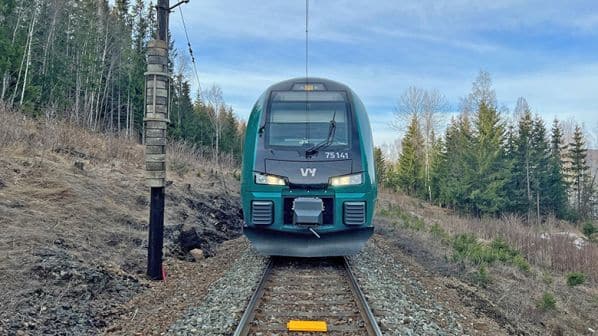 Despite the delay to the introduction of Norway's ERTMS, testing is underway using equipped vehicles including this Vy Flirt EMU.
Photo Credit: Bane Nor

NORWEGIAN rail infrastructure manager Bane Nor has delayed the launch of ERTMS on the Trondheim - Bodø Nordland line, and the Gjøvik Line from Oslo, originally planned for November, after it became clear the global supply crisis would mean it would not be possible to equip enough trains in time.

This issue first became apparent in the case of the Nordland Line - which is the longest in Norway, running for a total of 729km through moors and mountains paralleling the country’s north-west coast. coast.

The picture looked more hopeful for the less remote, 124km Gjøvik Line, due to better access for delivery of the parts needed, but then feedback from Alstom, which is equipping the trains, indicated that only two trains would be ready in time for November..

Bane Nor decided that it would be better to delay the new signalling launch rather than cause disruption to the timetable, which comprises trains running at hourly frequency in the morning and afternoon rush hours and at two-hourly intervals at other times of the day.

“That is why we are waiting to put the signalling system into use until we have more trains ready,” says executive vice president for operations and technology at Bane Nore, Mr Sverre Kjenne.

Meanwhile, Bane Nor’s ’s Infrastatus 2021 report has revealed that 26% of the network is in a state requiring maintenance and renewal in the next 12 years - an increase of two percentage points compared with the findings of the previous report issued in 2021.

InfraStatus 2021 is the second in a series of annual status reports for Norway’s railways and provides an overall classification of the state of the national railway network, which today consists of 32 operational lines. It also identifies rail facilities and structures in need of renewal and so informs Bane Nor’s tasks list in the years ahead.

The report indicates that, across the country, facilities representing 26% of the current replacement value are in a condition such that they need to be renewed within the next 12 years.