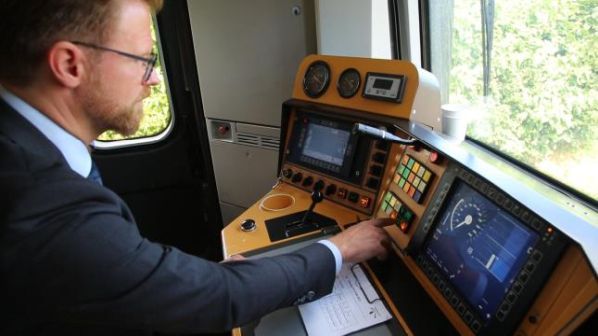 A driver in the cab of a Danish train equipped with ETCS.

DANISH infrastructure manager Banedanmark has completed installation of ETCS on the Holstebro - Herning and Vejle - Skanderborg lines in Jutland.

This the latest milestone in Denmark’s ambitious programme to install ETCS Level 2 Baseline 3 across the country’s whole 2132km mainline network – along with CBTC on the 173km Copenhagen S-Bane – to replace legacy signalling.

The Holstebro - Herning and Vejle – Skanderborg lines are the fourth and fifth lines on the Jutland peninsula network where ETCS has been rolled out and seventh and eighth overall. It follows the Mogenstrup - Nykøbing Falster section of the Ringsted - Femern line, connecting the Danish islands of Zealand and Lolland with the under-construction Fehmarnbelt undersea tunnel which will link Denmark with the German island of Fehmam, which was completed in December 2021.

Banedanmark says experience from the sections where ETCS has been installed shows that the system results in better train punctuality, more stable operation and better traffic information.

“Within the past few years, in western Denmark, we have put the new signalling system into use between Frederikshavn and Lindholm, from Thy to Struer and between Langå, Struer and Holstebro,” says Mr Janus Steen Møller, Banedanmark’s director of signal systems. ”From this we can see that the new signal system has over time provided more stable operation with more trains on time.

“Since the new system is digital, there are fewer components at trackside. This means that it will be less vulnerable, and it will make it possible to have a more stable train operation with fewer signal errors,” adds Møller.

This view is also confirmed by Arriva, the operator of services on the Holstebro - Herning and Vejle – Skanderborg lines. Ms Therese Chritensen, the company’s commercial manager, says that thanks to ETCS, drivers “are provided with far more information, and it gives them even greater safety when they have to drive trains on the routes” where it is installed.

As with all Banedanmark lines where ETCS has been installed, there will now be an initial period of testing where the new system will be closely monitored for technical faults. During this time road users between Brande and Vejle are being made aware that some level crossings may remain closed up until the morning of August 26.

Work is continuing to install ETCS on other lines in Jutland, specifically from Esbjerg via Skjern to Holstebro and Herning, Esbjerg - Lunderskov, Bramming -Tønder and Aarhus - Aalborg Airport.