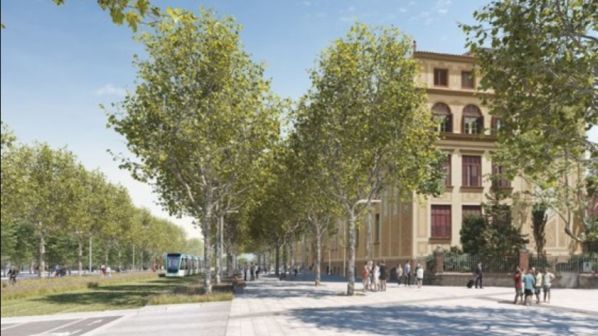 An artist's impression of how Barcelona's Avinguda Diagonal thoroughfare will look when the APS-powered tram line is up and running.
Photo Credit: Alstom

BARCELONA Metropolitan Transport Authority (ATM) has awarded Alstom a contract to supply the electrification system for the first phase of a new line connecting the city’s two existing tram networks.

Alstom will supply its APS ground-based dynamic traction power system, which is designed to preserve the attractiveness of urban environments by removing lineside infrastructure and obtrusive catenary wires and masts. Power is instead supplied through segments set into the track to supply current to vehicles, which automatically switches on and off depending on whether an LRV is passing over them, so ensuring complete safety for pedestrians and other road users.

The Barcelona Diagonal tram line project aims to build a new 3.9km connection between the city’s two tram networks, known as Trambaix and Trambesos, along the important Avinguda Diagonal thoroughfare. Inaugurated in 2004, the city’s 29.22km tram network currently has a total of six lines with 56 stops and carries 26 million passengers annually. The 15.1km Trambaix links the city’s Plaça de Francesc Macià with the Baix Llobregat area, while the 14.1km Trambesos connects Barcelona district of Sant Marti with Sant Adria de Besos and Badalona.

As well as adding six new stops to the tram network, the new line will improve connections between the two tram networks and the suburban rail and metro networks, reducing carbon emissions by encouraging passengers to switch from private vehicles to public transport.

Alstom’s contract includes the infrastructure works and retrofitting the APS system on 18 LRVs from Barcelona’s current fleet of 41 Citadis trams. Those vehicles were originally manufactured by Alstom and continue to be maintained by the company.