Trams to return to Moabit in €33m line M10 extension. 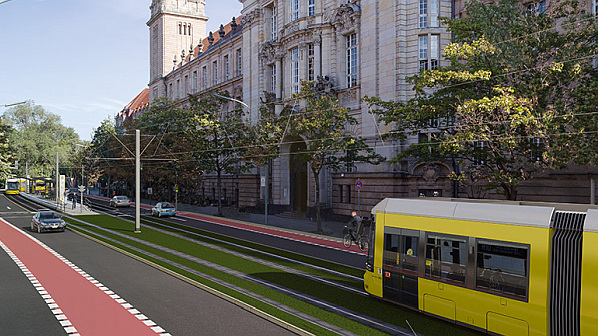 Trams will return to Moabit after half a century.
Photo Credit: BVG.

TRAMS will serve Berlin’s Moabit neighbourhood from 2023, more than 50 years after they last ran through the city centre district, which lies north of the River Spree.

The Berlin Senate and public transport company Berlin Transport (BVG) approved the construction of a €33m 2.2km extension to the M10 line on August 11. The line will from Berlin Main Station via Invalidenstrasse, Alt-Moabit and Rathenower Strasse and Turmstrasse U-Bahn station .

The new line will largely run on grassed tracks and will open in the first half of 2023. There will be 21 different construction phases during which around 4400m of track will be laid across five sites. Bicycle paths, tram stops, contact line systems and a rectifier plant will also be built.

All four new stops will be fully accessible, and it’s expected more than 10,000 passengers will use the new section daily.

Funding for the extension comes from the Berlin Sustainable Development Program (BENE), the European Regional Development Fund and the State of Berlin-Brandenburg.

“The tram extension will make public transport even more attractive for Berliners,” says Ms Ramona Pop, chairwoman of the BVG Supervisory Board, senator for Economy, Energy and Public Enterprises. “You can then easily switch from the tram at the main train station to the S-Bahn and long-distance transport, as well as to the U-Bahn at the Turmstrasse U-Bahn station.”

“Never since the fall of the Berlin Wall have there been so many tram projects as now,” says Ms Regine Günther, senator for the Environment, Transport and Climate Protection. “We will implement them in the coming years and make climate-friendly, city-friendly local transport ever more attractive.”