BLS to complete Lötschberg Base Tunnel renovations by year end 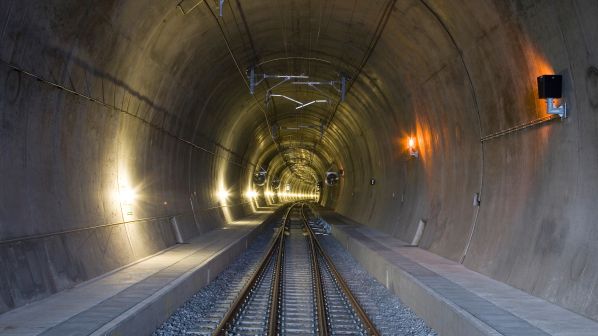 BLS has submitted the rennovation plans to the Federal Office of Transport, and work on the 34.6km tunnel is expected to be completed by mid-December.

Work will include the excavation of a cavern to the side of the tunnel bore, in which a 2000m3 sedimentation tank will be installed. When completed, runoff water will flow into the new tank, where the sediment will be collected and removed regularly by rail. Meanwhile, the water will be diverted away to flow out towards the Raron end of the tunnel.

The renovation will be funded by the Swiss government as part of a service agreement with BLS which runs the Lötschberg Base Tunnel.

The work follows the discovery of an uncontrolled water ingress which washed sand and silt into the tunnel. The more heavily affected eastern bore on the 14km twin-bore section was immediately closed by BLS, which has installed temporary steel sedimentation tanks in the affected areas. Currently, water and sediment continue to flow into the tanks, which must be emptied weekly.

The eastern bore of the tunnel will remain closed throughout the duration of the work, with all traffic set to be diverted through the single-track western bore until the completion of the renovation. BLS has confirmed that it expects most Swiss Federal Railway (SBB) passenger services to continue using the route, and that the company is currently in talks to negotiate a detailed timetable plan for affected passenger and freight operators.

The western bore, which also experienced a similar effect to a lesser degree, has not experienced any further water penetration since March 13.

The Lötschberg Base Tunnel opened in 2007 and passes under the Bernese Alps of western Switzerland, and connects the cities of Frutigen, Berne, and Raron, Valais.